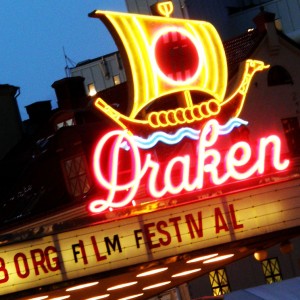 The Göteborg International Film Festival (familiarly known as GIFF) takes place annually at the beginning of February in Gothenburg, and has done so for 35 years. Or is it 34? I know they jumped over the number 13 but can’t remember if they managed afterwards to make the numbers correspond to the years. Not that it matters really.

GIFF started small in the 70s and has grown and grown. Today it’s the largest of all the Nordic film festivals. Most importantly (for reasons of local pride) it’s bigger and more prestigious than Stockholm’s international film festival. (Ha! Take that, Capital City!)

Gothenburg’s festival has now reached the stage where it offers some 450 long films (and dozens of shorts) shown in 9 or 10 different locations over a 10 day period, and attracts an audience of some 32,000 film lovers and cineastes. It’s also an important venue for the trade, with deals being done and prizes being competed for. The series of seminars and debates held in the new-since-last-year Lagerhus social central offers extra events to interest the general public, students of film and film buffs who may be taking a break from the rigours of end-on-end movie going. There are side events – this year’s video installation Curtain Callers at Magazingatan 3 for example. And there’s a social side to the festival which spills over into the pubs and clubs.

I’ve attended GIFF annually since moving back to Gothenburg from Sundsvall in 1998, but I was a sporadic visitor even before, when I had the opportunity.

The beginning of February, in cold-damp Gothenburg. Of course you want to be sitting in a packed cinema, all breathing together. As ever, this year, I found myself wondering if I would break my record and go down with a cold within the first 24 hours. But no, both I and my good lady Mrs SC remained remarkably healthy throughout.

And I managed to tweet all the way through the week about the festival and the various films and events I went to. This blog entry is based on those tweets.

My first film was The Color Wheel. An American film shot entirely in grainy black and white. (I think the title was supposed to be a joke.) Lots of shaky Dogma-style hand-held camera action. There were some funny lines (especially in the first third of the film) and situations. Still, I wouldn’t choose to see it again. I had the feeling it was a student effort produced as a final, graduation masterwork. All the characters (bar one) seemed about the same age, friends or classmates of the director and writer? The principles, Carlen Altman (JR) and Alex Ross Perry (Colin) were clearly revelling in improvised backchat, some of the other actors though were clearly uncomfortable with this and were, simply, wooden. And the story … well, I felt the story hadn’t really been worked out and the conclusion was clichéd and a bit desperate. As the lights came up after the film was over, the guy in the seat next to me said “I don’t know”, and that was my reaction too.

Left: Still from The Color Wheel with writer & actor Carlen Altman as JR. Right still from QM I think I’ll call her QM with Ann-Sofie Sidén as QM.

My second film of the festival was actually a series of short art films by Ann-Sofie Sidén. All interesting and enjoyable each in its own way, and all of them of much higher production quality than I, at least, am used to seeing from films made for video installations.

The first film was QM, I think I’ll call her QM in which a paranoid psychiatrist ‘studies’ a mud-woman (QM = Queen of Mud) imprisoned in a room in her house. I’m not giving anything away when I say QM escapes at the end. The second film was Head Gallery Piss Up. It documents the installation in a gallery in Vienna of a squatting, pissing, full-size model of the artist in bronze. Fascinating and surprisingly funny! The third film was Curtain Callers a film of events behind the scenes before, during and after a performance at the Stockholm Royal Dramatic Theatre. This latter piece (as mentioned above) was also being show as an installation (5 screens side-by-side with surround-sound audio) which I also managed to see later in the week.

All 3 films were worth seeing, though they probably benefited from being seen together and with Ann-Sofi Sidén present and answering questions put to her by an interviewer and the audience. She was disappointed – to say the least – about the projection of Curtain Callers at the Bio Roy. Too bright, she said, too loud.

Later the same day (this is Saturday 28th January) I saw my third film and first documentary, Deaf Jam in one of the lecture theatres at Gothenburg’s Technical University, Chalmers. Part of the fun of GIFF is getting to see films in places one wouldn’t normally visit. I’m only ever at Chalmers at festival time.

I though Deaf Jam was fantastic. I tweeted that I was blown away. A film of deaf teens working with American Sign Language and imagery to create visual poetry … and then finding ways to communicate to/with hearing poets and on to an audience of predominantly hearing people.

I was so impressed I tweeted an appeal to Swedish Educational Radio (Utbildnings Radio) to: Please! Buy Deaf Jam and show it on TV. No response though.

OK – A bit long for a blog entry (but about par for me). I’ll break here with the intention of continuing in a later entry. I’m also planning to write some longer reviews of some of the films and post to the IMDb – I’ll add links as I go along. In the meantime, here’s the trailer for Deaf Jam.