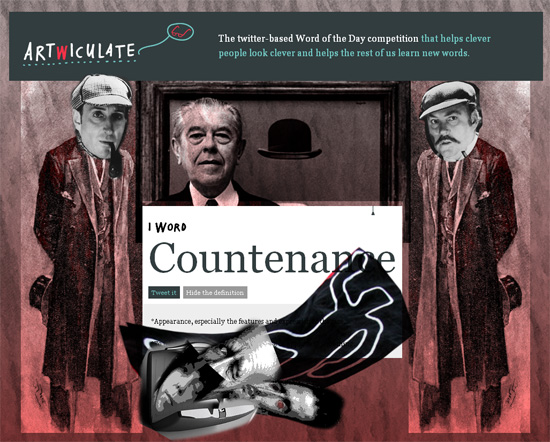 On 27th May, the Artwiculate Word of the Day was countenance. On that day we were also pursuing Rene Magritte. It seemed time to reinstate Helmse and Carruthers. The second half of this series of tweets contains references to a number of themes and characters familiar and dear to the Artwiculati!

“RIP, Viscount Visage,” said Helmse, thoughtfully. “We shall not gaze on the like of his countenance again. If indeed we ever truly did.”

“Really, Helmse! I cannot countenance such flippancy. The man was a monster, always hiding behind the faces of others. Good riddance, I say!”

“You may countenance my utterances or not, Carruthers, but this is no suicide. The man was murdered, and brutally.”

“Just because we abhore the victim, we cannot countenance his murder. That would be a slippery slope indeed! His killer must be found.”

I regarded the faceless body at our feet. “They call him the Count of the Countless Countenance. How can we be sure this is he?”

“Though he has lost face, and faced loss,” said Helmse. “Yet he carries three changes of countenance in his semblable case.” 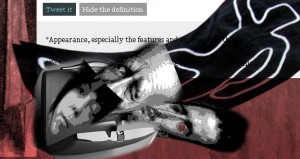 “No, Carruthers, the Countless Countenance is no more. Now it falls to us to discern the lineaments of the Viscount Eviscerator.”

“The countenance of Artwicutown,” I looked around. “Have our paths brought us here before?” “A couple of times, my forgetful friend.”

Our first interviewees were two masked men: “Holy Countenance, Batman!” cried one. “Does this mean 2Face is dead?” “Only superficially, Robin.”

A woman passing by pouted: “The Countless Countenance? So many faces, but such a man!” *sigh*

Helmse struggled in water with an odious Octopus. As I helped him ashore he muttered: “Otto has the strength but not perhaps the countenance?”

Accosting a passing goldfish as it leaped from bowl to bowl I enquired about the Countenance, “Blurb” was all the answer I received.

On the face of it, our investigations seemed fruitless, but then we were directed to a bar: The Audacious Countenance.

2 investigators walk into a bar & order a countenance. BartWender waves at the mirror behind him, but then mixes them each a Golden Doublet.

The Redheaded League was meeting in the private rooms at the bar. Through the crowds of redheads we glimpsed a satisfied countenance. Max!

Would he be able to help? But Helmse & I were unable to push through all the redheads and Max clearly did not countenance coming to our aid.

Next? Catch a train to Countenance, we were told, be careful not to Absquatulate, find the Meretricious Callipygian and ask about #Magritte

Strange place. To board the train we had to compose a haiku: I spring six degrees /round to face your countence /but you tralala (@Tralala56)

Searching through the train for #Magritte, who is variously reported to have disguised his countenance & even to have disembarked.

“Will we ever find the culprit, Helmse!” I ejaculated. “Please, Carruthers! I cannot countenance your language. There are ladies present.”

I looked, but could see no ladies. Rather, were we surrounded by ruffians of the 1st water, their countenances hard and their fists likewise

“Ah! Mando,” said Helmse. “We meet again.” With a casual flip of his wrist, the toughest-countenanced ruffian produced a home-made knife.

Mando was very pursuasive. Helmse and I decided to call off our hunt for the murderer of the Countless Countenance. 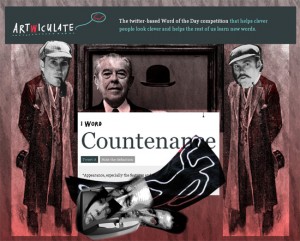