Last week, one of my fellow Blogg52ers, Pernilla who blogs at SVXRT40, was taking part in a chain response to a series of questions about books and reading. She concluded her entry for the week with a set of new questions that she passed on to any readers who felt challenged. I felt challenged.

(Let me just say I’ve made the executive decision to interpret “books” to exclude reference books or history books. Otherwise we might have a much longer text.)

The first question was Vart läser du helst? – Where do you read for preference?

I like to read in a quiet sitting room with good light and table nearby where I can stand a drink. What I like to read (changing the question) depends a great deal on how I’m feeling at the moment, but I think generally speaking and for entertainment I reach for either detective stories or science-fiction. Joy is finding a book that combines both successfully. I’ve just finished reading China Miéville’s The City and the City, which I picked up when I was in London at the end of March. A wonderful fusion of noir, detection, thriller and existential science-fiction.

Gillar du att prata om böckerna du läser? Do you like to talk about the books you’re reading?

Sometimes I do and sometimes don’t. I’m not a member of any book club, but it’s fun to talk with people I know, if they’ve also read the same book. Just the moment I’m reading The Broken Road, Patrick Leigh Fermor’s final, posthumous account of the walk he took as an eighteen-year-old from London to Constantinople in the early 1930s. In this volume he is crossing Bulgaria. Bulgaria is where my wife and I met. Though fifty years separate Leigh Fermor’s visit and ours, it’s still fun to read out loud his descriptions of places we both know. I hope she’ll want to read the book too and maybe we can talk more about it then.

What I think about really thick books – I think thick paperbacks are a bloody nuisance! Heavy to hold, with spines that are easily broken. There was a time when I thought they were good value – so much packed into them, but then I read a few that weren’t very well written and I came around to the perspective that thickness is no guarantee of a good read. Most of the thick books that I now own are either survivors from my youth or hardback replacements for good, thick books that fell apart (The Lord of the Rings, for example). Or, of course, some of them are reference books or history books — but we’re not talking about them!

I like it to be quiet around me when I’m reading, at least to start with. Once I’m into whatever I’m reading, if it’s caught my attention, I can tolerate music and even conversation around me if it’s not too loud. The most disturbing noise is conversation in English if I’m reading English or conversation in Swedish if I’m reading Swedish. That really disrupts my concentration. I like to be sitting comfortably, but I can read on the tram and I enjoy reading on a train. I’m not very good on long distance buses though. It’s nice to have a cup of tea or coffee to hand (see my answer to the first question), but if I’m really deep into a book I’m likely to forget about the drink and discover it tepid or cold when I eventually emerge.

It’s hard to say how much free time I think I need before I start reading. It used to be, I’m almost sure, that my answer would be “None.” Nowadays, though, I’m very conscious that I’m more likely to pick up a smart phone to check news headlines rather than a book to read, if, for example, I have a shorter journey into town or maybe 20 minutes before I have to start making food. Picking up a book to read is far less of a natural spontaneous thing to do than it used to be. I’m not sure when that happened, but I think it must have been in my 30s when work — work that involved a great deal of reading — came to occupy so much more of my attention.

In other words, I think I had already lost the spontaneous reading habit even before I became intimately acquainted with the Black Dog. I miss it, which perhaps is a sign I might rediscover it in the future.

It is a very, very long time since I was so excited by a book that I sat up all night to read it. I don’t think I’ve done that since my student days. Another experience is closer to hand: being unable to sleep and getting up in the middle of the night and sitting with a book, often a book of poetry, and reading for two or three hours or until the dawn comes up.

Vem skulle du vilja ge ett boktips? Vilken bok skulle du tipsa om då? To whom would you like to recommend a book? Which book would you recommend?

I don’t recommend books much, though it happens — usually on the spur of the moment. This week – tomorrow in fact – people in Britain are going to the polls to elect a new parliament. As ever, the new parliament will consist of a mixture of hacks elected for the umpteenth time, career politicians who have climbed the rungs of party politics and now get to play with the big boys and girls, and a small group of individuals who don’t fall into either of these categories but who’ve joined in and campaigned out of the burning conviction that they might be able to make a difference or to protest against the other candidates. I’ve been wondering what book or books I might recommend to this last group.

I’m feeling cynical, so I recommend The Prince by Niccolo Machiavelli. Not only is this an admirable guidebook to the practicalities of politics and power, you might also use it to help you spot when you are being manipulated and perhaps help yourself to avoid some of those pitfalls.

Vilken bok borde alla ha läst? Which book should everyone have read?

That’s a hard question to answer. In Britain a very long-running radio programme called Desert Island Discs asks guests which one book they would take with them to a desert island assuming they already have copies of The Bible and The Complete Works of Shakespeare. This is because most Brits of the sort likely to be invited as guests on Desert Island Discs, if not limited by this proviso, would almost certainly say either The Bible or Shakespeare — which would make for a very predictable list.

Senaste bok du ångrar att du läste ut? The latest book you regret having read through to the end?

Hmmm, nowadays I rarely regret wasting my time reading to the end books that don’t work for me. If a book hasn’t revealed itself in the first fifty pages or so to be interesting, intriguing, exciting, funny or whatever, I might give it another fifty pages, but usually I give up. In this way I have saved myself from the pain of reading, for example, anything by Dan Brown but the first hundred pages of The Da Vinci Code.

I have a very sad affliction that means I find it hard to lend books. It’s not that I don’t want to encourage other people to read good books, it’s that if I lend a book I expect it to come back – preferably in the same condition I lent it. This just doesn’t happen. Nowadays I try not to lend books, but to give them away. A book given away is not a book one hopes to see again. Sadly this doesn’t always work and I am right now thinking about a copy of Stella Gibbons’ Cold Comfort Farm — a hardback Folio edition in a slipcase with beautiful illustrations – that I lent more than two years ago. Is it ever going to come back to me? I begin to doubt. 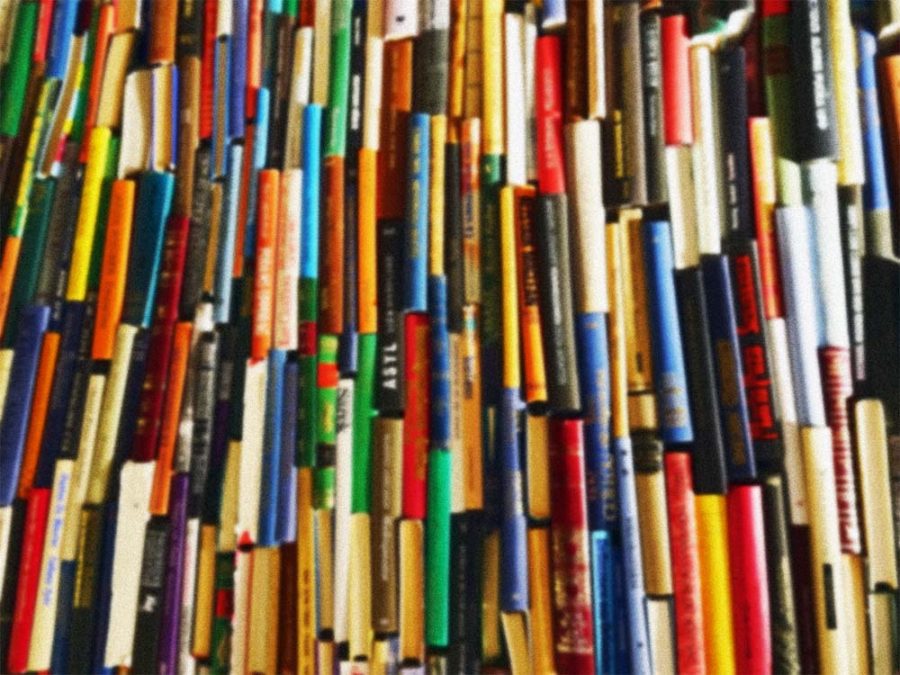 Thanks Pernilla, answering those questions was fun. It’s inspired me to run a similar book lover’s questionnaire and I just spent this morning putting it together. There are seven questions. Rather than present them all here though, I shall publish a separate question each day for the next seven days, both here and on my Facebook page. I’m interested to see what answers I get — if any. I’ll summarise the response in my next Blogg52 entry. (Which consequently may be a day late.)

I originally published this article on the separate At the Quill website. I revised it for spelling and punctuation, carried out some SEO fine-tuning, and added a featured image before transferring it here on 27th April 2017.