About John Nixon, the author (aka TheSupercargo) 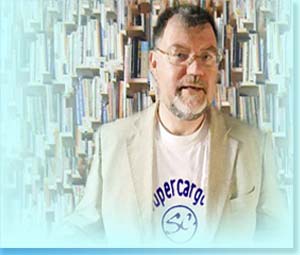 My name is John Nixon, my Internet handle is TheSupercargo and I am solely responsible for this website.

The rest of this page is about me personally as reflected in the posts and pages of this website. If you are less interested in that and more interested in what the website has to offer, go to this page: About TheSupercargo website.

Or you could go and Explore the website on your own. Be adventurous!

Although I have lived for most of my adult life in Sweden, I was born and brought up in Britain and when I write creatively I write in English. I write fiction, poetry and biography. I’ve long experience of writing material for education and I translate other people’s writing from Swedish to English. Sometimes I edit other people’s English language texts.

Apart from writing and translating I take photos, make illustrations, toy with vlogging, pretend to be a web designer and mess about on the Internet. I am also working to become an independent publisher.

Read more about me by clicking on the labels below.

I’ve been writing for most of my life. I can’t remember when I started, but it must be sometime after my seventh birthday. I say that because I can remember learning to write in the year when I was six and we lived in Ghana.

In my teens I started writing stories and poems that I submitted to magazines and anthologies. As long as I remembered to include a stamped, self-addressed envelop, they were always returned. On one occasion some poems were accepted by a small press magazine. Oh, the excitement! But the magazine died before my poems appeared. (And they never came back.)

On the other hand I sometimes managed to get reviews and essays published, and soon after becoming a teacher in 1982 I started writing and using my own teaching material. However, all through my twenties and into my thirties I wrote my stories and poems mostly for the desk drawer. There was a fallow period, and then came the Internet.

Other blog entries here I publish under a few different categories. At the Quill is for my occasional writing diary entries. Also where I publish articles generally about writing and independent publishing. You’ll find my travel writing under Stops and Stories, in particular perhaps my posts about life in Brussels where my wife (Mrs SC) and I lived between 2015 and 2017. Under Reviews you’ll find mostly book reviews and film reviews, but also a few other sorts of review and occasional entries in my reading diary.

For upward of ten years I’ve been working on an historical novel called Elin’s Story. You can find an FAQ page about Elin’s Story by following this link. And all the posts on the website tagged Elin’s Story are here.

I started taking photographs when I was about 8 or 9 years old when I learned to use my mother’s Kodak Box Brownie. Over the years I worked my way through a number of different cameras. In my late teens and early twenties I used a dinky little 110 mm ‘spy’ camera. In my late twenties and early thirties I had an Agfa Isolette with a bellows front that once belonged to my father. The Agfa produced big square 6cm x 6cm negatives which gave really beautiful pictures… if I managed to use the right shutter speed, aperture and focal length. No automation there!

Today I’ve joined the digital age and currently I use a Canon Powershot SX50 HS and a Canon EOS 700D.

In 2011, on a skiing holiday in northern Sweden, I fell awkwardly on my face. I didn’t have my glasses on at the time, which was a blessing as I came down very hard. No property was damaged, but I shook something loose inside my right eye. I still don’t know really what’s wrong. Long days at an eye clinic when I got home after the holiday – and again the following year – never cast any light on the matter. At least, I’m still puzzled. The doctors were satisfied it isn’t anything serious. “It’ll get better,” they told me. A decade later I’m still waiting for that.

So here I am now, and back in 2011 there I was then, with blurred objects floating about in my eye. The objects blur my vision; not all the time, but they can throw my focus off when I’m sighting through a viewfinder. For a period the accident drained a lot of joy from my photography.

But you can’t spend your life feeling sorry for yourself, can you? Trusting much more to my camera’s automatics and going with my strengths, which I believe are composition and an ability to spot a good subject, I set out in 2012 to publish a daily photograph from Gothenburg. This was before Instagram and after I’d rejected Flickr. I went for a dedicated website.

Between September 2012 and November 2014 I published a daily photograph at GBG365. That site is still available though I’m not maintaining it or adding to it. Instead I’m publishing occasional photos on Instagram, Facebook, Twitter and/or Ello and slowly moving the better photos from GBG365 across to this site. You’ll find many of them tagged as Photo of the Week. I’m planning a new series with a bit more text to each picture. This will be tagged MyGBGDays.

Some photos may also make an appearance in my webshop or in publications from TheSupercargo.

I was going to write artist here, but that might be going a bit far. Even illustrator is pushing it. However I do make my own pictures – not just photographs – to illustrate my blogs, poems and stories. Sometimes I even make pictures just for the hell of it. I publish the latter under the Images category and the Illustration sub-category.

As I develop the independent publishing side of TheSupercargo, I think my illustrations may become more significant. At the time of writing I am working on illustrations for the TheSupercargo’s Artwiculate Round-up anthology. I think some of these pictures may well make an appearance on the website as well.

Although I don’t have a certificate (and so cannot undertake legal or medical translations) I do translate Swedish texts to English.

Please note, you should always employ a translator to translate into his or her mother tongue. I do not make translations from English to Swedish!

The most of my experience is with technical translations in the mechanical engineering and chemical engineering fields, and with translations of texts for educational purposes. I also occasionally undertake jobs where I translate websites or parts of websites. Contact me here.

The most regular translating job I have is for Mera Förlag. I’ve been working for Mera for 12+ years now. I translate the questions for their weekly “News Quiz” to English. This I do for 36 weeks each year during the Swedish schools’ term time. I also write the weekly “Commentary” with extra information and links to what I hope are interesting and relevant websites.

Recently (2016-2019) I’ve been working for Medtech4Health, mostly helping out on their website.

Sometimes I carry out English editing – proof-reading texts in English and/or correcting other people’s translations. Nowadays I’m really only interested in doing this with shorter texts. Think website pages or posts rather than major works of fiction. If you need help with a text you are writing or translating, once again – feel free to contact me.

When I was setting up my own website years ago, I realised that while “John Nixon” is a fairly unusual name in Sweden, globally it isn’t. I felt I needed a moniker to distinguish myself. “TheSupercargo” came to hand.

Originally the supercargo was the person aboard a merchant ship with responsibility for the cargo. On this voyage – on this web-ship – I am responsible for everything you see. I am my own supercargo. I am … TheSupercargo. (Ta-da!)

How did I light on the name in the first place, you ask? Gothenburg, my adopted home, was the hometown also of the Swedish East India Company (Svenska ostindiska kompaniet). Founded in 1731, the first supercargo was Colin Campbell, a Scot. I am remotely Scots (Nixon is a Borders name). It seemed like a good enough reason to appropriate the title.

Sadly the Swedish Companies Registration Office (Bolagsverket) doesn’t think I ought to call myself TheSupercargo – apparently there are still supercargoes out in real the world. Consequently my company name (as of September 2014) is SC Words and Images. (Previously it was John Nixon English Language Services.)