Tea with the hatter 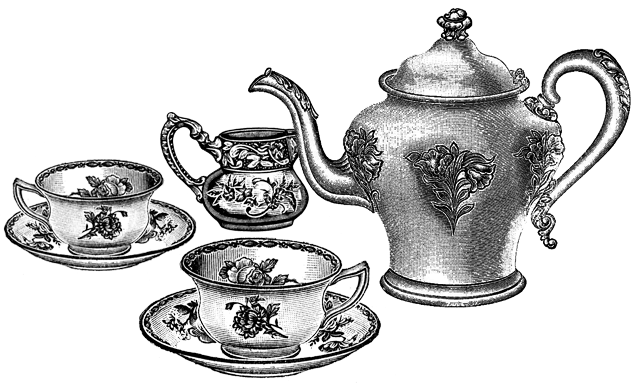 Welcome, sir, welcome. Please, sit. Are you comfortable? A cup of tea perhaps? It stands ready, you see. Let me pour.

They tell me you are interested in my device, my Conformatory. May I show it?

Some background first? Of course.

My family? Humble people, sir. My father was a weaver. I was but a child when he apprenticed me to a hatter in the town. To leave home was painful, but my apprenticeship gave me a future. For seven years I learned the trade, then worked on as the hatter’s assistant. Eventually infirmity took him, whereupon I inherited the business.

I enjoyed the trade, sir. The heads I met! Both low and high. Eventually I met some of the greatest of our age. These fingers, sir, have explored the skulls of heroes.

The human head is a marvel. Although my profession concentrates on the skull’s circumference, yet I took a lively interest in the whole. In all the bumps, protrusions and planes.

When first I met it, sir, the science of phrenology did not seem strange to me. Already, for many years, for my own amusement, I would deduce the personality of new customers through the shape of their heads. Discovering phrenology, it was more of a wonder to me to learn others had seen this too. Dedicated their lives to investigations in which I had but dabbled. 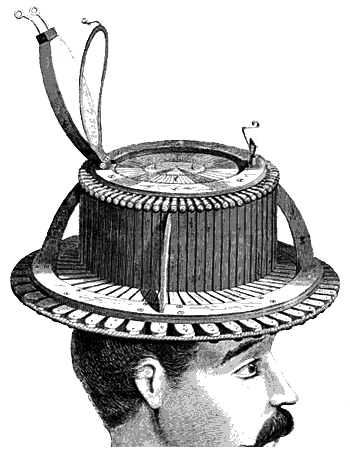 My business prospered, I took on apprentices and assistants of my own. Now I could take time from the physical work of forming hats to concentrate on my phrenological studies. I took to debating with fellow explorers in this newest of sciences, corresponding with eminent phrenologists.

There are those who hold that the shape of a man’s head, the way it defines his character, is fixed from birth. More agreeable to me is the theory–. Based in fact! As the skull of a child is malleable, so is its ultimate shape and thus the character of the adult.

It would be possible, at an early age in a child’s development, so to form the skull as to promote positive characteristics. By gentle but constant pressure at certain points on the growing head the brain organs could be disciplined. Tendencies towards destructiveness or amativness could be checked. Leaving other parts of the skull free would allow, for example, benevolence and hope to swell.

More interesting to me, however, was the goal of restoring the adult skull–. Temporarily! To its childhood malleability. Thus enabling changes to be made to its shape, amending the character of the subject.

You are familiar with the conformateur? That essential tool of the hatter’s trade with which we measure the shape of a head around. It was the device I chose to adapt.

And now, sir. Now you will permit me to show you the fruit of my labours!

No, indeed, sir! It is quite safe. Allow me to place it over your head.

There. Mark how the cowl embraces your whole skull. And the pins–. As I release them you will feel a light tap on the bone. It is not uncomfortable, I trust?

The pins rest on the skull, mapping the declivities and ascents, plateaus and curvatures. The skull, you understand, fits like a gauntlet over the organs of the brain that govern our traits. So my Conformatory fits over the gauntlet and reproduces it enlarged. Now it is plain to view the most prominent areas of the skull.

I see, for example, your most developed quality is not conscientiousness, as your employers believe, but trustfulness. Do you trust me, I wonder?

For the Confirmatory to work, the subject needs be perfectly still. You remain relaxed? Paralysed even? There was a drug in the tea. You remain conscious, but you cannot move. Even so, I must restrain you. This rigid cuff around your neck will keep you head up and locked to the back of the chair. Just so. These straps will hold your wrists and ankles in place.

Now to connect it up. Behind this curtain is the rest of the device. Ah, your eyes widen!

Each of the pins in the cowl is made of conductive copper and is hollow. Each of these rubberised tubes, you see, contains a copper wire and a channel for the softening fluid. The tubes connect with a little click. So. Each tube to a pin. None of the tubes are heavy in themselves, but collectively they add heft to the cowl.

That trickling you feel is nothing to worry about. Just a little blood released as the extra weight causes the pins to penetrate your skin.

As I release this valve you will feel more pressure still. Yes? As the tubes begin delivering fluid through the hollow pins directly to the bone. Meantime an electric current, which I activate now, carried through the copper, galvanises the fluid. And–. The process begins.

You weep, I see. The fumes do irritate. Allow me to wipe your eyes.

Already your skull begins to soften. Now I can exert finger pressure on the pins – here, I think, and here – to correct the shape. Once the pins are pressing correctly I can lock them in place. So.

Then it will be just a matter of allowing the skull to harden in its new form.

You are still conscious, I see. Do you feel the organs of your brain adjusting? Is it an interesting sensation?

Perhaps you wonder at my freedom, in this place, to continue developing the Conformatory? Take that up with your employers! They know of my work, indeed they do. You believed you came as their Inspector? No. They provided you to me.

They understand the superlative advantage the Conformatory will provide, once it functions correctly.

Be assured, my more recent subjects have not died. The degree of their insanity reduces over time. You will meet them later and may judge for yourself. If you retain the capacity. 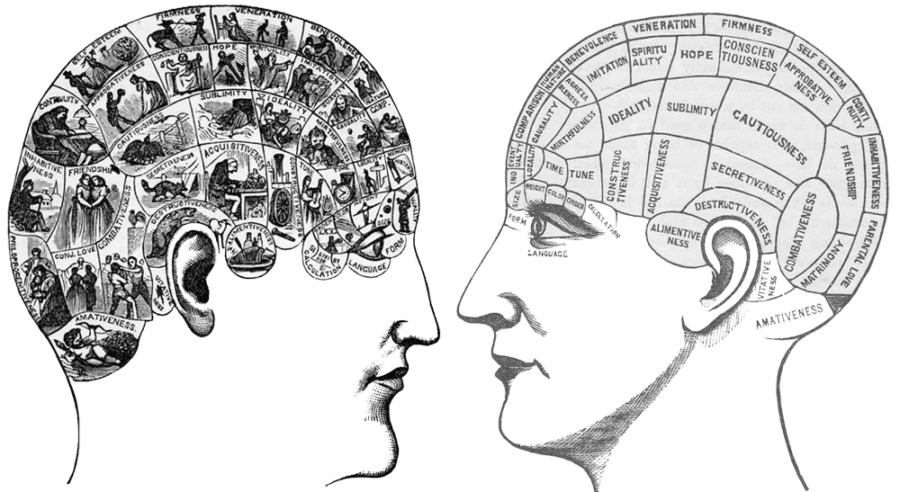 I wrote “The Phrenological Conformatory” in response to a challenge to write a “Victorian horror story” in 1000 words or less. (Tip of the hat to Christopher Stamfors.) Actually the original story I produced was about 1600 words long. I’ve put in nearly as much work cutting it down to 1000 words as I did writing it in the first place. Editing was a good exercise, but I think the story was best at about the 1300 word mark. I may rewrite it later with a less rigid limit.

The illustrations are lifted from various places on line and tinkered with in Photoshop. They all appear to date from the 19th century and so I assume they are out of copyright. If I have inadvertently infringed your copyright in any of them, though, let me know (use the contact form) and I’ll remove and replace.

2 thoughts on “The Phrenological Conformatory – a story”