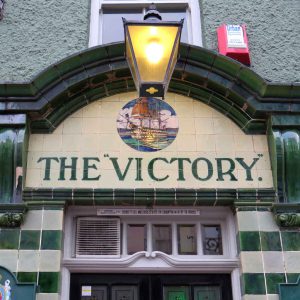 Walk down from the Brighton Clock Tower towards the sea and take the first left. You are on Duke Street and entering the older part of Brighton. Not quite the oldest part. That is in the Lanes. But this is the first extension of the old fishing village that developed in the late 1700s.

Walk on down Duke Street. Notice there is still one second-hand bookshop left. There used to be at least four, but it’s somehow comforting to see that one has hung on. You can see the “Victory” pub on the corner of Middle Street.

The Duke of Duke’s Lane

Turn right down Middle Street, ignore the entrance to Duke’s Lane. It’s just the same tourist trap it always used to be. (Though, if you like, take a photo of the figure of the Duke on the first floor balcony. Someone has a sense of humour.) 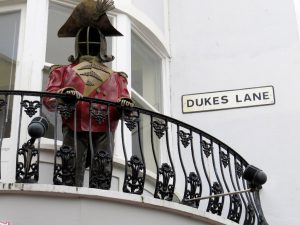 Middle Street has a kink in it as you pass the back wall of the infant school’s playground. Observe how the old Hippodrome is boarded up now and looks in need of serious redevelopment. Once an entertainment Mecca, now it’s just a waste of space. It probably has a preservation order on it but no one with the money who’s prepared to try a restoration. (Mind you, forty years ago it was still only a ghost of its former self. Bingo once weekly is all I remember.)

The inventor of cinematography

Here on the right is the narrow terraced house with the plaque to William Friese-Greene “the inventor of cinematography”. (The plaque lies.) Opposite is, now, the Coach House Restaurant. If they are open, go in and have a cup of coffee. If you can, sit in the front room, on the street, looking out onto Middle Street with Friese-Greene’s plaque in front of you and you’ll be in roughly the same place I occupied for a year during working hours between the summers of 1975 and 1976. And if there’s no business in the restaurant (as there wasn’t the day I visited) you can engage the bored but patient young man who serves you with a story about what used to go on here, once upon a time. 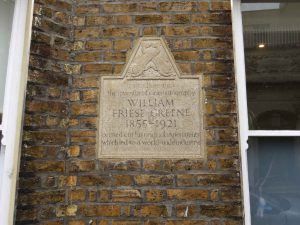 When I left school and before I went off to university I took a year out. Nowadays I’m told this is standard practice. Young people taking their gap year travel around the world, go on extreme journeys, get drunk (or high, or laid… or all three) in every continent they can. It’s a way of getting all the adventurousness out of their systems before settling down to three, four or more years of serious academic study.

At the tail end of the 70s it was more unusual. Though I did know people who went to work on a kibbutz or spent a year teaching for Voluntary Service Overseas. Two years after me, my sister did voluntary work in Belfast with an organisation trying to bridge the gap between the warring communities there.

What I did was get a job. 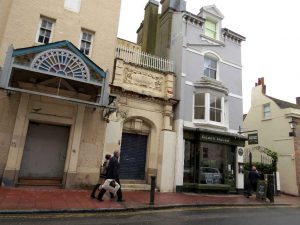 It wasn’t entirely my own doing. My mother’s former boss, Mr Oliver, dabbled in antiques. Especially, he bought and occasionally sold antique clocks, and he’d previously given me a commission to research and write up an essay about the earliest clock-makers in Britain. Now he recommended me to one of his suppliers. Which was how I ended up working in an antiques shop on Middle Street.

Capewell Antiques was owned and operated by an unlikely business partnership. One partner was Nicholas Mann who specialised in grandfather clocks, Properly called longcase clocks, they are floor-standing clocks operated by weights and a pendulum. It was Nick who was Mr Oliver’s supplier. Nick was a stocky, cheerful, curly-haired man. He had an easy smile and calculating eyes. I guess now he was in his early thirties, though I’ve always been a poor judge of age.

Nick lived in Wales where he had storage and a workshop, and drove around the country buying longcase clocks and taking them home to fix up. He dealt in other clocks and some pieces of furniture as well, but longcase clocks were his main interest. Every so often he would load up a van in Wales and drive all the way down to Brighton with new stock. Brighton was a magnet for European and American dealers and collectors.

There were usually about 30 of Nick’s clocks in the shop at any one time and one of my jobs every morning was to do the rounds, winding them up and setting them working. Usually I then went around and stopped them all, because – take it from me – 30 longcase clocks all chiming at more or less the same time on the hour every hour (not to mention the ones that also chimed on the quarters) is enough to drive you insane.

The other partner was the eponymous Phillip Capewell.

I don’t know for sure how he came into possession of the shop that had his name on it. I can’t believe it was by his own efforts. I’ve a vague memory of someone telling me his mother bought it for him. Or perhaps he’d once been more successful. By the time I came on the scene though, he was certainly not doing enough business on his own to keep the shop stocked and open. We always carried more of Nick’s stock than Phil’s. Phil needed his partner.

I think Phil must have been about the same age as Nick and like Nick, he was short and stocky, but where you could sense Nick was muscled under his skin, Phil was just dough all the way to the bone. He had a round puffy face with small blue eyes and straight blond hair. His small, pudgy hands were adorned with antique gold rings. He always wore at least two and one was a seal ring, a ring inset with a red intaglio that would once have been pressed into hot wax to create a raised image.

I’d never before ‒ and never since ‒ come across anyone with quite Phil’s body language. He used gestures almost as if he’d learned them consciously, but then in the middle of use he would seem to get tired of them and abruptly do something unexpected. For example, he would sometimes hold his chin in one hand in an attitude of thought, but then he would suddenly and quite savagely use his fingers to pinch the corners of his mouth together so his lips pursed out.

Other times he would hold the palm of his hand against his cheek, again as if thinking, then sharply wipe the hand down and flick the fingers off his chin. Sometimes he would rub his hands together as if in glee, but I never got the impression he was doing it because he actually felt pleasure, it always seemed as if he was putting it on.

I thought of Phil as, basically, a knocker boy with pretensions. He certainly had the gift of the gab. I never saw him actually knocking on the door to talk people into selling him things. By this stage in his life he was buying from the real knocker boys. But he always had a story about anything he was trying to sell – usually a story about the previous owner. “He was a colonel in the Royal Sussex,” he’d say (though I knew the object was something he’d picked up in a flea market a week before). Sometimes he liked to present himself as a go-between. He was selling for the owner: “She’s a lovely old lady who’s fallen on hard times, poor soul.”

His story-telling overflowed into the rest of his life too. Whatever happened to him got inflated into a story, and he was the hero who came out on top. After I’d worked in the shop a few weeks and witnessed some of the incidents that Phil then turned into stories, I got to the point of taking anything that he said had happened to him with a very large pinch of salt.

If Phil had been the only person putting goods into the shop it would not only have been rather bare, it would also not have been an antiques shop, except maybe six or eight weeks out of the year. Most of the stuff he had on sale was better described as second-hand or, if I’m being generous, “vintage”. According to some of his friends, who dropped into the shop looking for Phil but stayed to chat with me if he wasn’t there, any really valuable pieces he bought he’d store in his flat rather than bring to the shop. I suspect he wasn’t getting them quite legally.

Phil didn’t come from Brighton. I’m fairly sure he came from the West Midlands, but he worked on trying to get people to think he came from London, preferably the East End. He couldn’t do the accent, but he loved trying out rhyming slang and new expressions. Especially, he loved to use slang expressions to talk about the value of things that he bought and sold, and the money that he made.

It was from Phil I learned that there are only five types of wood.
“There’s oak, oak is good. There’s beech, beech is good too, but not as good as oak. Then there’s pine, pine is crap. And then there’s mahogany, mahogany’s good.” Anything else was “fruit wood”.

I got more nuanced information from Nick when he was in the shop.
“This is sycamore, American. Not maple, it’s too light. Lovely wood. Look how dense the grain is. See these flecks? Sort of freckles? That’s typical sycamore.”
Then I would tease Phil by asking him “What wood is this?”
“Beech,” he’d say.
“Nick says it’s sycamore.”
And he’d wipe his hand down his cheek and flick his fingers and say, “Could be,” and change the subject or tell me to make him some tea.

Where are they now?

I wonder where they are now, forty years on. I can’t see Nick as a pensioner and I imagine him still buying and selling his clocks. Whenever I catch an episode of one of those British reality TV shows about antiques, I half expect Nick to turn up as a dealer or even – why not – an expert. But Phil I can easily picture on a golf course somewhere in Spain, betting on the next putt. I wonder if he’s still using the same “mockney” slang for money or if he’s picked up some new words. Does he call a euro a “eurinal”?

I had written the above when I decided to go on line and see if I could track down Nick Mann or Phil Capewell, just to see if they’re still around and what became of them. I couldn’t find Nick. There are a surprisingly large number of people called Nicholas Mann, which is odd as it’s a schoolyard joke ‒ “Nicholas Mann’s a nickerless man!” You’d think parents would be more careful about the names they give their kids. However, Phillip Capewell was a different story.

Phil Capewell may or may not be playing golf in Spanish retirement just now, but in 2008 he was sent to prison for 5 years for receiving stolen antiques, at least according to this blog article that reproduces a report from the Brighton Argus. This photo, taken from the article (a Sussex Police mugshot), this is definitely Phil. A receiver of stolen goods and the beneficiary of violent crime. Although I can remember Phil passing more than one unsavoury comment about sex, I don’t know how much credence to give to the accusations of paedophilia in the follow-up information below the news report. Still, what a pitiful excuse for a life.