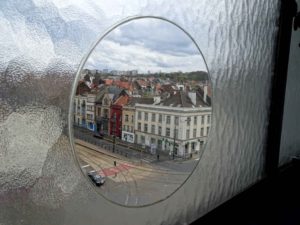 To be sure, there’s more in the air everywhere than we can usually see. Dust motes glimpsed dancing in the sunlight are not even the half of it. Just at present I’m going through a pollen reaction phase. I know that the Brussels air is laden with pollen because my eyes are itching and my nose is running. I just can’t see it. Can’t see it except after the rain when pollen scrubbed from the air scums puddles and leaves yellow-green lines on car windscreens where the wipers have rested at the end of an arc. 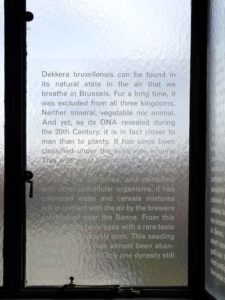 But there is something special in the Brussels air: spores of the wild yeast B. bruxellensis (aka Dekkera bruxellensis). Belgian lambic beer is brewed without the addition of brewer’s yeast. Instead the fermentation vessels, filled with barley malt and wheat mash, are left open. The wild yeast in the air that lands on the mash starts the fermentation.

Now, though the yeast spores do exist in the wild in the air of the Senne river valley where Brussels stands, and though lambic beer was originally brewed – 900 years ago – just from these wild open-air spores, more recently the lambic process is started within the brewery. After all this time there is a higher concentration of wild yeast in the air of the brewery. I suppose the process is more reliable nowadays than perhaps it once was.

Theoretically, though, anyone can make beer in Brussels. Just expose some sweetened barley porridge and let the wild yeast get to work. Not that most people do. It’s far too much trouble. 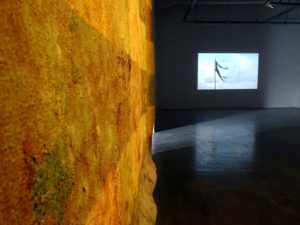 And anyone can make art out of anything.

Most people, though, don’t have the eye to see what might be art in the world around them. And only some of those who have the eye also have the cast of mind, the urge, the skill, the talent, the time and patience to create art from what they see. It’s as though the spores of wild art in the air that settle on everyone, that are breathed in by everyone, have to find the right person. The right vessel in which to start the process of fermentation. (To take the metaphor further, just as today there is a higher concentration of yeast spores inside breweries, I suppose students in art schools are more likely to breathe in a higher concentration of art spores.)

All this is brought to mind by the Edith Dekyndt exhibition. (I keep wanting to call her Edith Decadent.) It’s on at the WIELS Contemporary Art Centre here in Forest/Vorst. The WIELS centre occupies a former brewery. Several of the great copper vats in which lambic beer was once brewed share space with the cafe and bookshop on the ground floor. Up above are four floors of gallery space, two of which at present are given over to Dekyndt’s exhibition Ombre Indigène (Indigenous Shadow). 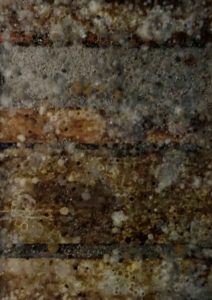 Edith Dekyndt is a Belgian artist who is clearly inspired by science in general and biology in particular. Judging by the examples of her art on show, she is fascinated by the appearance of material that has been subjected to some sort of biological influence. Yeast for example, which she has persuaded to grow as a fungal carpet on a woven carpet.

One Thousand and One Nights 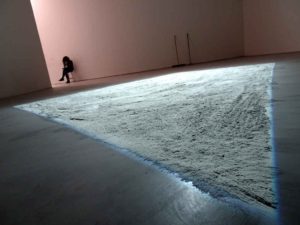 Some of the works on display have been created specifically for the space and make references to the history of the brewery and the brewing process. The installation called One Thousand and One Nights is a carpet made from dust collected from around the gallery over the period of the year. A light illuminates a shape on the floor and the dust is swept and raked within the lit shape. From time to time the light shifts and the gallery guard has the job of repositioning the dust in the new shape the light creates on the floor. 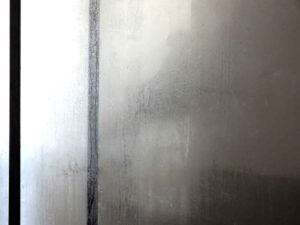 The temperature and humidity of the Senne valley, and the water of the river, are also key elements in brewing the local beer. These elements Dekyndt also makes use of. A kind of long narrow aquarium bottomed with artificial fur fabric and with condensation beading the glass. Petri dishes with cultured bacterial growths – again, bacteria from the air we breathe. Projected slide image after projected slide image showing the range of colour and form the bacteria take.

Fascinating – and a little disgusting 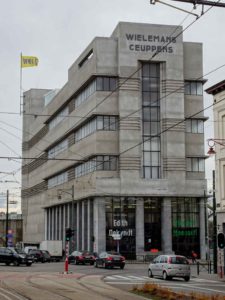 I come out of this exhibition fascinated. A little disgusted, true, but definitely fascinated. I also come out a even more impressed by the amazing filtration job my nose, mouth and lungs do. The protection afforded by my immune system – given the range and volume of the micro-organisms, unseen, that I am breathing in from the Brussels air.

Is it art? Yes, it is. In the same way as written science-fiction is literature (which I believe to be true). This is science-art.

I originally published this article on the separate Stops and Stories website. Transferred here with a little polishing for SEO and a new featured image 18 May 2017.

1 thought on “There’s something in the Brussels air”