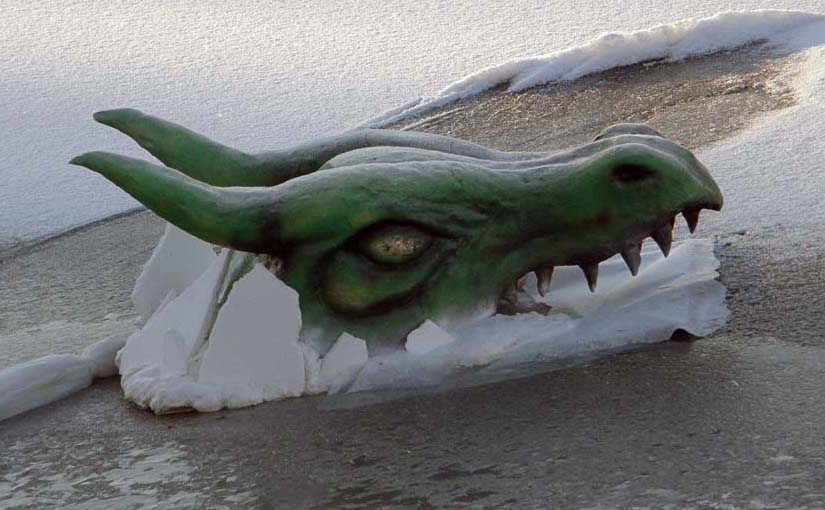 Here be Dragons: I’m using a dictation programme – DragonDictate – with various success. It seems to take a bit of getting used to.

There is a scene in The Player of Games, a science fiction novel by Iain M Banks, in which the protagonist, Jernau Gurgeh, while swimming backstroke, is dictating into a microphone that is tracking his movement up and down a swimming pool. I have to confess that even I found that unlikely, but what an exciting idea.

My ideal has me leaning back in my armchair, eyes closed, feet up and arms relaxed, speaking my novel into the air while somewhere across the room a computer records my voice and puts my words into accurate text. Alternatively, I see myself walking in the countryside, pausing by inspiring scenery and dictating poetic descriptions that, far away, the computer in my home turns into immortal poems.

Every four or five years over the last fifteen or so I have invested in the latest example of voice recognition software in the hope that now my dream will come true. It hasn’t – yet – but hope springs eternal in the human breast.

I can’t remember who made the first software I tried out, but I know I had a stint with IBM’s, and now I’m working with Dragon NaturallySpeaking from a company called Nuance. This is the first time I’m using a microphone which does not attach me to the computer with a cable – certainly an improvement. But I still have to sit here looking into the screen in order to catch all the errors the software generates.

It’s not terribly conducive to keeping up a creative flow.

The instructions I have tell me that I should speak in full sentences and as naturally as possible. This will help the software to identify correctly what I’m trying to say. That works part of the time, but much of the time – especially when I’m writing fiction – I dictate as I think. I say something, I change my mind, I repeat, I hesitate, I pause for thought, I go back and change words, phrases, punctuation. And Dragon doesn’t always like me to do this. Just at the moment it seems to be behaving itself remarkably well. Yes, I’m dictating this and I think the Dragon knows I’m talking about it and is on his best behaviour.

But it does have a nasty habit of using completely the wrong pronouns. In the last sentence of the previous paragraph I actually dictated “is on its best behaviour”. And when I dictated that phrase in quotation marks just now, Dragon printed “is on the best behaviour”.

The other frustration is the punctuation. I try to use only commas, dashes and full stops, but even these tend to get in the way of my flow. More irritating though is that Dragon only understands the word “full stop”, three out of every five times I use it. I never know whether it’s going to print a punctuation mark or whether it’s going to write out “well stop”, “stop”, “will stop”. In desperation at one point I taught it a new pronunciation for the punctuation mark in which I sing. That works, but it doesn’t really help me keep my sanity.

Supposedly, the dictation programme is supposed to get better at recognising my pronunciation and style as we go along, and I think it does. (Now, I just had to sing a full stop there!) But it doesn’t seem to be getting better very quickly .

I’ve been using Dragon mostly for translation work over the last few months. I find it easiest to read Swedish, translate in my head sentence by sentence and then dictate. And I also use it for blogs now and then – and I suppose that’s going to become more frequent in the future now I am preparing a second “business” homepage. But though I try weekly to use Dragon for creative writing, I do it because I feel I ought to try rather than because it is a pleasure and a help.

Looking back over the last month I see that I have managed to exceed my target average of two hours writing a day but my average number of words a day has dropped by about 300 words. I managed a blog entry each week, as resolved, but once again did not manage to write much more than 5000 words for Elin’s Story – though I did manage 150 words more than last month. Once again I started writing a short story but didn’t complete it, though I did manage to submit a short story (“Elephantasy”) of 6300 words. It was one I wrote last year. (So I satisfied a part of my commitment to the W1S1 year.)

The series of articles that I pitched to an Internet magazine in January has been accepted, and I wrote and submitted another in the series, but I’ve no idea when they’re going to be published. I won’t crow about it and tell you the publisher just yet. I should add that there is a distant and vague promise of some sort of income from these articles, but I’ll believe it when I have the cash in my hand.

As I mentioned above, I’ve started gearing up to publish and administer a new homepage. After three and a half years of trying to write my novel and living off my savings, I’ve come to the sad conclusion that I need to have an income. I am breathing life into my firm, John Nixon English Language Services, marketing myself principally on the Swedish market. Hopefully it will bring in some paid work. I have one customer, so if I can get just one more that will be a 100% improvement. Ah, the joy of statistics!

Deciding what to put on the static pages of my new homepage is fairly straightforward, but I can’t just have static pages. I’ll need a blog and a podcast and probably the occasional video film as well, so I’m planning that at the moment. Language Services implies an interest in language and languages, so I’m anticipating a blog about English and Swedish and the Swedes’ use of English. (Perhaps also the English’s use of Swedish.) Many years ago I started writing a book about Viking Words – the 10% of everyday English words that we have inherited from Old Norse. Now I’m thinking about disinterring that and maybe turning it into material for a podcast. We shall see.

Hopefully, I will find Dragon more useful for writing this material than I have found it for creative writing. Of all the four voice recognition software I’ve tried over the last 15 years, this is by far the best. Despite my complaints above, I do believe it has improved my productivity. It’s also better at spelling English than I am, which is another point in its favour! Though I have to say I am constantly surprised that, though I have it set to British English, it insists on spelling “program” with the American spelling. It is the only word it does this with: colour, organise, centre, analyse, fibre, traveller, manoeuvre, defence, catalogue … but program. Most peculiar.

And as another guide to productivity, let me just say this text of 1200-odd words took me about an hour and ten minutes to write and another 50 minutes or so to correct and post.