Elin is pregnant. A first attempt to write something about Elin Ulfsdotter, the protagonist of my projected historical novel

My word count for the week just gone is about the same as the previous week. Roughly 700 words a day. Not at all bad considering I was on holiday in Stockholm over the weekend.

Last week, I wrote my first few words in the story of Elin/Helen/Helena. I’m going to have to find a better working title than that – it doesn’t exactly roll off the tongue. Nor off the keyboard. No matter. I wrote the words, about 550 of them.

I was thinking about her and her situation. When she came over to England and chose to stay, she had no one she knew, she relied on the people who were around her. They gave her the network she would surely have needed. She joined the court, Elizabeth was her companion/elder sister/protector. Her value to the queen was her very lack of contacts. It was an astute move of the queen to annex Elin as her intimate, her bedfellow. Elin was guaranteed not to be a part of any of the different court factions – she relied on the queen and no one else.

But then 10 years on, she has become established at court, she is an adult in her own right with her own income from the estates of her former husband. (I need to check if that’s true.) English has become her first language. And now her marriage to Thomas allies her with one of the court factions. Elizabeth kicks her out – but how well anchored is she in fact in this society? In my imagination she finds herself very isolated – at least to begin with.

I was thinking about this and nodded off in my armchair, half in a dream myself, I imagined her dreaming on the night after the removal to her new lodgings, in a house somewhere in London near the Tower. She would be troubled, confused, to a degree lost. She would see herself again as the child she once was, and her religious and cultural convictions would bring her to accuse herself of the sin of pride, of trying to be better than she is, of setting herself up against the queen – just as her waking common sense would assure her of the opposite. It is not pride, at least, not her own pride that has brought her to this.

I woke and did some household chores and read and lay down to sleep properly, but couldn’t, got up again and scribbled down notes about Elin’s dream. Then I slept, but the following morning I was able to write the scene. My first grip on the story. I didn’t write any more, but the questions multiply from this: She’s lodging in London, why? Why not with friends? Why not with Thomas’s family? And where is she lodging? Near the Tower, OK is that going to be very salubrious? Probably not? Does she have no one to talk with? No servant? No friends? The records speak of her getting help from one of the lords at court. Who? Why? There is also a connection to John Dee. Was he a help to her? 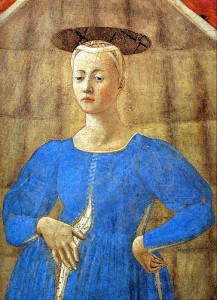 I imagine she is pregnant but does not know it yet – she is sick and the thing she remembers is the seasickness crossing the Channel when she was 15. How likely is it she would not know? She was not an only child and had younger brothers and sisters, so would have observed motherhood first hand in her own family, but she left home when she was 14 or 15, so how much does she really know about the practicalities? I need to find out about maternity customs in Elizabethan England. I have already found some pictures of maternity clothing – such as it was. Front lacing dresses for the rich or letting out the seams of your clothes, or slitting them and wearing aprons for most of the rest.

I have also been looking for more, specifically on Elin herself. Found a book in English from 1936 and have ordered a copy through ABE. The Sjögren book is still the most recent biography I have, though. Some more interest in Elin on the Internet since I looked last, five, six years ago. A page on Wikipedia and a page of antecedents on a genealogy site. And she crops up in references on various sites of the Society for Creative Anachronism. (They are very taken with her dress in the miniature portrait). [There’s also a summary of Gunnar Sjögren’s book on a Swedish SCA site here.] Little else. I have found a vague reference to her having appeared in a novel, portrayed as Elizabeth’s lesbian lover! I should try to find that. (Should I try to find that?)