Democracy! Is it ridiculous to be so taken up with an election from which I have been disenfranchised? Last night’s election count from the UK had me sitting up till midnight, and up again before 6 this morning, to follow on TV and Internet.

There is a vicarious satisfaction in seeing Labour cut down to size and in seeing the Tories scrambling. In seeing the Nasties (in the form of the British Nationalists) beaten back. In seeing the Greens take their first parliamentary seat. But it’s not like it means anything to me any more.

I’ve been disenfranchised by the UK twice now. The first time was when I moved abroad in 1982, the second was in 1995 when my grandmother died. Two lesser known bizarrities of the same British electoral system that looks set to give the “moral right” to govern to a party that commands around a third of the popular vote and the support of only about a quarter of the voting population. (If the 69% electoral turnout the BBC is claiming is true.)

It was like this. In 1982 I moved abroad for the first time to work. In the spring of 1983, Mrs Thatcher called an election. A number of my Scandinavian colleagues had recently taken part in elections and voted at their embassies, so I thought I could do the same. Went off to the British Embassy where they smirked at me and told me that by moving abroad I had disqualified myself. “Well, what about you lot then,” I asked. “Are you disqualified because you’re working abroad?” Of course they weren’t. Diplomats (if they aren’t members of the aristocracy for whom other rules may apply) are still technically working on British soil and so have a vote to cast.

Where, I’m not sure. Westminster, perhaps.

So I watched the election from afar and comforted myself with the thought that most people who live and work abroad would probably cast their vote for the Tories anyway. Had ex-pats had the vote, mine for Labour, or Liberal, or Social Democrat would have drowned in the blue sea of Tory votes the others would have cast. Still, I was disappointed.

So this is what you mean by democracy?

At the time I was living in Bulgaria, behind the Iron Curtain. Bulgaria under Todor Zhivkov was hardly what you would call a democracy. The Bulgarians called it a People’s Democracy, of course. They had their own elections, with a 99% or better turn out and 99% or better approval rate for the ruling party. Bulgarian friends and teacher colleagues who expressed an opinion thought it was quite amusing that I’d been disenfranchised. “So this is what you mean by democracy?”

By 1985 Mrs T and her government, scrambling around for all the votes they could get, had changed the law and enfranchised British citizens living abroad. I was living in Finland then. I duly got in touch with the British Embassy in Helsinki, filled out the forms and got my vote all in time for the 1987 election.

Unfortunately, there were snags. Because of the antiquated and invidious electoral system Britain espouses, I could only vote in the constituency where I had last been registered as a voter. More, I could not cast a postal vote. I had to give my vote to another voter living in the constituency who would cast it on my behalf.

Tough decision. I would have liked to have been able to vote in Leeds or in Birmingham. Both cities where I’d lived as a student and where my vote might have made a difference. Unfortunately, the last place I’d been registered to vote was in core Conservative territory; West Hove and Portslade. And the only person I knew still living and voting in the constituency was my grandmother.

Gran was at a heart a communist, but pragmatically a lifelong Labour voter. And she wasn’t having anything to do with tactical voting. The whole business felt rather futile, but I still went through the motions. Gran got my vote. She had to take a taxi from her own polling station to the one serving the district where I’d been registered. (That was the only place she could cast my vote.) And Labour’s candidate in Hove got two votes instead of one from us. Labour still came in third that time.

The next election was in April 1992, I was living in the north of Sweden. If I remember rightly I still had my vote, but Gran was not in a state to help or care. She’d died in February.

At various points the qualification requirements for enfranchisement for Brits abroad have bounced about like rubber balls. You had to have lived and been registered in Britain within the last 5 years, or 20 years, or 15 years. (It’s 15 years at the moment, and postal votes are allowed now.) I don’t know what the situation was in 1997, but I didn’t have a vote then. Still, I sat up all night and when Labour won West Hove and Portslade, I knew I was seeing an earthquake in British politics.

But looks can be deceptive. In respect of electoral reform, the juicy fruits of the FPTP (first-past-the-post) system proved far too alluring for Tony Blair. So the British (in the one election that really matters) are still stuck with a system that is fundamentally flawed.

I just heard a Lib Dem Lord interviewed: “What will you demand from Labour if you’re offered the chance to share government ? What’s your bottom offer?” says Jeremy Paxman (not quoting him exactly here.) And the Lord is waffling about strong government, the best for the British people, respecting the vote – and I’m shouting at the screen: “Proportional Representation! Say Proportional Representation! Idiot!” 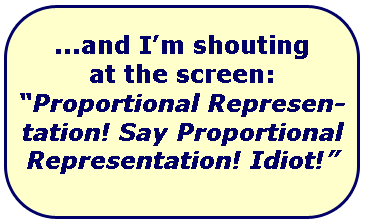 Because regardless of the result, a hung parliament or a clear majority, today:

So this is what you mean by democracy?