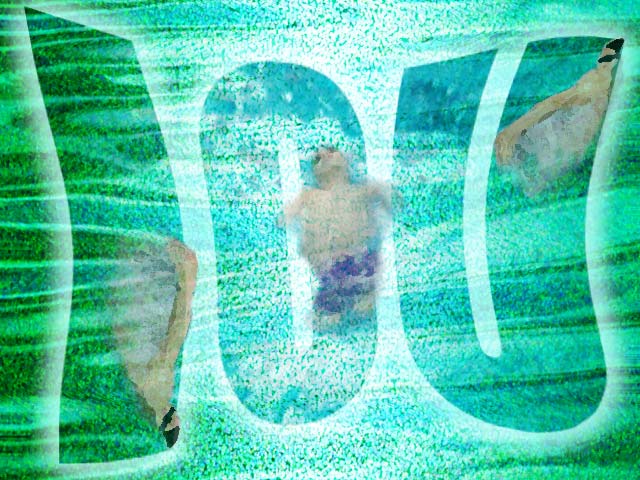 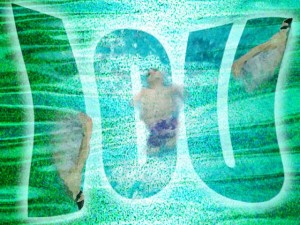 Since I started to swim regularly at my local swimming baths, I’ve noticed that many people exercise-swim by the alphabet. The following is based on personal observation. Perhaps I should add that my local baths splits the length of the pool three ways: there’s a narrow single lane for fast swimmers, a larger area 2½-3½ times the width of the fast lane for exercise swimming, and an area of similar width for splash-and-play (kids) and social swimming (where people sometimes swim three abreast for a chat).

The I and double I

The fast swimmers in their reserve unfailingly swim a capital I from one end of the pool to the other before turning on their wake and swimming back again.

In the larger area for exercise swimmers, there is space for other letters, but you also see the double I. This is the one I myself prefer to swim: a capital I from one end of the pool to the other, then edge across to the lane for people travelling in the opposite direction and swim a capital I back.

There are quite a few double I swimmers, but more people who swim in a square O. These swim from one end of the pool to the other, turn left, swim a short stretch to the return lane, turn left, swim the return length, turn left again, swim to the start of the outward lane and repeat. These swimmers (mostly women) have stamina; they don’t need to put their feet down at the shallow end or rest on the ledge at the deep end.

Now we come to the irritating categories. First the people (mostly men) who swim in Vs. From one end of the pool they set their sights on the mid-point between lanes at the far end, swim to it, then turn to swim back from the mid-point to the far corner at the end of the return lane. They pay no attention to the people whose paths they cross and that there aren’t more collisions is entirely down to the generosity and care of the I, U and O swimmers.

More irritating still are the lazy, self-seducing little u swimmers. These people like the idea of swimming, but don’t seem to enjoy the actual practice. They want to stay ahead of the crowd and swim many lengths, because it flatters their sense of themselves as sporty types, but they don’t really want to get so much exercise. They walk as far as they can in the shallow end along the outward lane, swim a few strokes, then, long before they have reached the end of the outward lane, they turn, swim across to the return lane, swim back until they are in their depth and, as soon as they can, they put their feet down and wade across to the outward lane again.

D swimmers swim their outward length in a straight line like an I, but their return length is a wide curve, cutting twice across the paths of swimmers in the return lane. They are less irritating than the V or little u swimmers as they only disrupt one lane, but they are still a nuisance.

This swimmer is a rarity: more often seen perhaps out in the wild than in a swimming pool. In the pool they may be out of their natural environment. Ignoring the tiled strips on the floor of the pool or the floating barriers on either side, this swimmer sets sights on the far corner of the pool from the one where they start and swims diagonally across both lanes, returning in the reverse direction. This swimmer is just as much of a nuisance as the V swimmers.

These swimmers are likely to be parents trying to swim for exercise at the same time as they keep an eye on their children in the splash-and-play section of the pool. Left in peace, they would swim like I, O or U swimmers, but they have a tendency to break off abruptly in the middle of a length to cut across the swimming lanes in response to a cry or untoward action from the play area.

OK, this is not really a letter of the Latin alphabet, but perhaps it exists in some esoteric, runic script. These swimmers take to the water in the middle of the exercise lane and begin to swim an outward curving length, but then curve back in, setting their sights on the mid-point of the exercise lane at the opposite end of the pool from where they entered. Then they repeat the same curved length swimming back, only this time in mirror image. The cat’s-eye swimmers manage to cut across the paths of other swimmers four times. They are a menace! 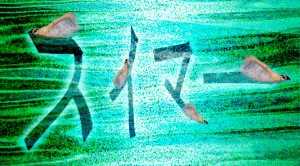 This is the Japanese word for “swimmer”. It bears a striking resemblance to the path cut through the water by a swimmer doing a backstroke in an open air pool where I swam once. Obviously someone more used to swimming indoors, with no guiding lines on a ceiling to swim by, only the sun and the clouds overhead, this swimmer wandered all over the place. Major collisions were only avoided because the pool was rather empty at the time.

(Reader, that swimmer was I!)

Which letters of the alphabet do you swim?

2 thoughts on “Ten Letters for swimmers – swimming the alphabet”