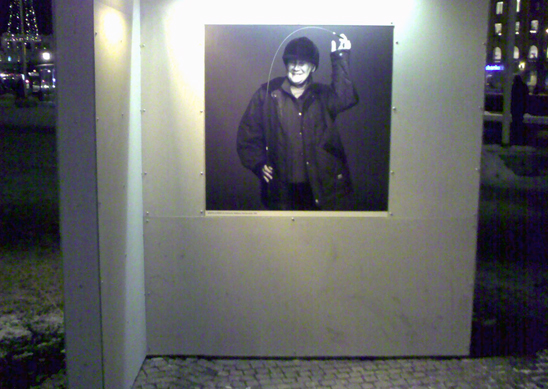 The homeless people’s magazine in Gothenburg is called Faktum. It’s the equivalent of The Big Issue and similar street paper’s elsewhere. For this Christmas, Faktum has published a calendar for 2011 with large, black-and-white photos of 12 homeless people dreaming of the jobs they would like to have (would have liked to have had perhaps) “when they grow up”. The sequence of photos is called “När jag blir stor” which translates exactly as “When I grow up”.

The photographer is Patrik Andersson, a son of Gothenburg now living in New York, who has made a name for himself with high fashion, commercial and celebrity photography. He’s photographed the likes of Bill Clinton, Mick Jaggar, Jennifer Lopez & Kate Moss. This commission (which he is doing pro bono) is a bit out of his usual way, but he brings a clear eye to it even so.

The subjects are photographed dressed in the clothes or together with props suggesting their dream profession, but the pictures are much more portraits of real individuals than this suggests. (For example this to the right – a man who would be king.)

All twelve photos are currently on display in the central square (Gustaf Adolfs Torg) in Gothenburg, where most of my illustrative pictures were made. Here to the left is a picture of the exhibition in the square.

The calendars are being sold, at 150 Swedish kronor per each, by the same homeless men and women who sell Faktum (and who have acted as Patrik Andersson’s models). [Sadly, you can no longer see the photos from the calendar on Faktum‘s homepage. The good news is, the calendar  sold out! (April 2011)]

And here below is a picture of my own copy (still in it’s plastic cover till 1st January). As you see, in this illustration I’m trying to be creative and not just reproduce the front cover photo. (Bertil Johansson, 74; Dream job: Priest; Homeless since 1994.) The two pictures here are of the same subject, the right taken with a flash, the left taken without. 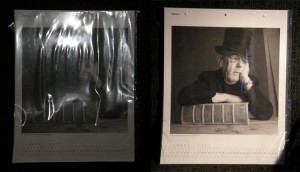