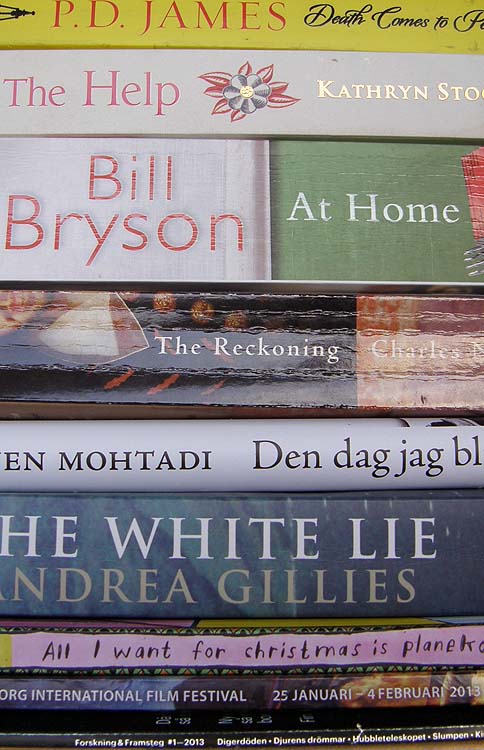 A new year; a new policy. I shall try to write an occasional post about the books (and other things) I’m currently reading. Some of these title will end up getting reviewed, others – probably the majority – won’t, but I can say a little bit about all of them here so they won’t feel left out. (Books have feelings too!)

To the right here are the books in my current reading pile. From the top …

PD James’ detective/Austen mash-up Death Comes to Pemberley. (A Christmas present from my sister and already read by Mrs SC. I have yet to pick it up.)

Kathryn Stockett’s The Help about Black maids working in White households in 60s America. (Another Christmas present. This one’s from my mother. As yet unopened.)

Bill Bryson’s At Home. On loan from my mum. I like Bryson in small portions so I’ve been reading this on and off for a couple of months now. Sometimes he’s very funny. Sometimes he hits the nail squarely on the head. But sometimes (when I happen to know more of the history of whatever he’s writing about than he he does – or than he’s chosen to express), I find him irritating and tiresome. In respect of this book, his focus is on social history using his house in England as the axle on which the book turns. But at some point in every chapter he remembers he has an audience Stateside too and (sometimes awkwardly I feel) wrestles his subject around to include an American slant.

Charles Nicholl’s The Reckoning: The Murder of Christopher Marlowe is next. Another borrowing this, from Nigel Leech at Adel Publishing. This is a really well written historical study of the murder and the events, people and period. I’ve read it through but it’s still on the pile because I’m making notes from it for the background of Elin’s Story.

Lawen Mohtadi’s Den dag jag blir fri is next. A biography – the first – of the Swedish Romany activist and children’s author Katarina Taikon. I’m a chapter into this now. An interesting subject and written in easy Swedish. A bit too easy to be honest. It’s very flat.

Below that is Andrea Gillies The White Lie. I read this novel when it first came out about a year ago. As I enjoyed it, I recommended to friends. I  even bought an extra copy to give to my sister (who also liked it). I fully intended to write a review of it for Amazon. But I never got around to doing so. Another New Year Resolution: live up to your promises!

The last three are thinner than the others, but still packed with enjoyment. Sara Granér’s All I Want for Christmas is planekonomi is a graphic debate book. A scream of protest against the triumphalism of the market economy in cartoon form. For dipping into. 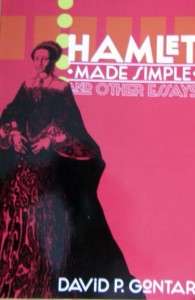 Below that is the new catalogue of the Gothenburg International Film Festival – starting in 10 days – which I am feverishly reading and flipping through back and forth as I try to narrow down my choice of films to see to something manageable timewise and moneywise.

And below that you can just see a copy of the latest edition of Forskning och Framsteg a magazine of popular science. Sweden’s equivalent to New Scientist. There’s an essay on the Black Death (Digerdöden) I’m looking forward to reading.

And one more title, Hamlet made Simple and Other Essays – see left – which arrived by post the day after I took the main photo. This is a book of essays by a visitor to these pages no less. David Gontar is currently a Professor of English and Philosophy at the Inner Mongolia University of China and this book (with the exception of the title essay) was conceived and written not far from Xanadu. Yes, really!

[Sad to say this last turned out to be in the Shakespeare-didn’t-write-Shakespeare cannon.]
Spread the love

4 thoughts on “A little reading”