I’m standing on Avenue Brugmann, just outside the gates to a park which I discovered by sheer accident on Sunday… 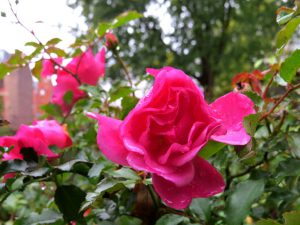 Yes, well, clearly I’m not. This was an experiment to see whether I could dictate a text for Stops and Stories while out and about. Unfortunately, most of the time, I forgot that one key element of radio journalism is speaking into the microphone so that one’s potential audience can actually hear what one is saying. There are snatches of my recording I can use, but I think I’d better stick to writing this in the peace and quiet of my study. 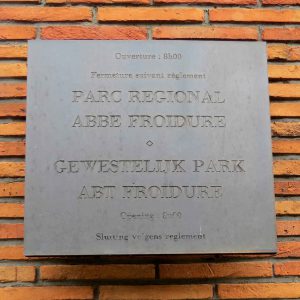 However, imagine if you will that we are standing on a moderately busy suburban city street with houses of four or five stories. Some with a narrow front, but still comfortable, others broader and quite impressive, almost mansions. All pressed up against one another in an almost unbroken parade. A tram line runs down the middle of the street. There’s a church squeezed in among the houses over there to the right. Up the road on the left a little way one of the mansions is doing service as the Embassy of the Republic of Cuba.

As you walk down this street towards the city, you pass on your right what appears to be the opening of a driveway leading to garages behind one of the more opulent of the buildings. The pillars of the gateway are a little intimidating, but you get a glimpse of a sanded drive and formally clipped green hedges and then you notice the plaque on the wall well above head height. “Parc Regional Abbe Froidure” it says. “Overture: 8h00”. Beneath are a long list of regulations (in French and Dutch). You have become familiar with seeing this at the entrance to other Brussels parks. 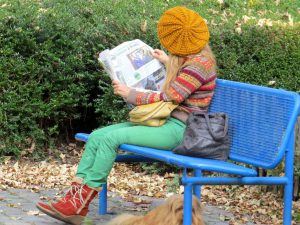 And if you walk through the gateway and down the sanded path you come to railings, and past the railings…

you come into this tiny little charming park which is really tucked away and hidden.

Damp and a little melancholy

I came across the park on Sunday while I was out taking photos of buildings in the area. It was a warm, sunny autumn day and the park was clearly being used by locals – walking dogs, sitting in the sun, reading a paper. There was a family playing with two small children in the little playground to one side. The colours, a mixture of autumn russet and summer green leaves, contrasted with the startling blue of the park furniture. I took a couple of photos, but then slipped out of the park to continue with my project for the day. “I’ll come back tomorrow,” I thought. 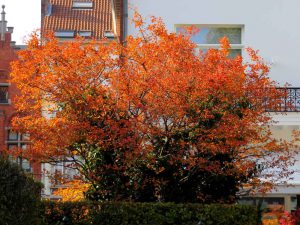 That was a mistake. The following day I didn’t get out until late afternoon and the clouds had rolled in and the first shower of the week had fallen. More were to come. Consequently most of my photos from the park are not sunny and cheerful but dull and rain spotted, and my recordings too are a little damp and a little melancholy, but perhaps that suits Abbe Froidure’s park.

Here in the middle of the park — it’s a sort of quadrangle of these cobble stones that are so prevalent all over Brussels. Personally I think they’re horrible to walk on but they are attractive to look at I suppose and, er— It’s an odd combination really. There’s this cobbled surface which looks old, and then there are these blue benches which are very modern. Blue, um, trellises I suppose, fences which are being used to train vines to grow up, and then in the middle there’s this concrete block. Er, I’m going to guess that it’s part of — a — water — feature… 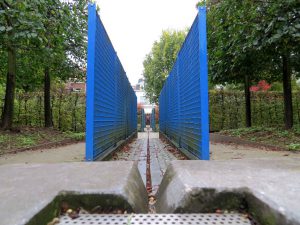 Do you hear how my voice slows down there? I could see the phrase “water feature” coming and I really didn’t want to say it and sound like an advert from a House and Garden magazine, but I couldn’t find a synonym quickly enough. Oh dear. Although, if you look at the illustration I think you’ll see — despite the gutter being clogged with fallen leaves and chestnuts — what I was trying to describe probably is intended to have water flowing along it.

The park is completely enclosed within this block by the backs of houses and their garden walls, but just as there is a way in from Avenue Brugmann so there is a second entrance directly opposite into a little triangle of streets around a green space called Square Léon Jacquet. 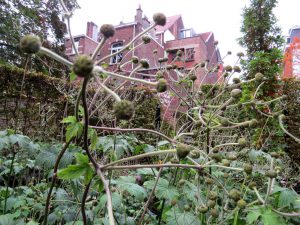 There were fewer people in the park on my second visit. No doubt the weather played its part, but also it was a weekday. Still there were a couple of dog walkers, a couple of young men on a cigarette break together who left the park soon after I arrived. A young woman who walked through, using the park as a short cut from Brugmann to Jacquet.

I sat down on one of the blue benches and tried to guess how the Abbe Froidure Park had come to be here. Although there are two or three mature trees – chestnuts and sycamores I think — the park itself is clearly not very old. Ten years, perhaps twenty. At first sight it looks as though it’s been created by shaving pieces off the back gardens of the surrounding houses. But the more I looked at it and thought about it, the more I thought it must have existed as an empty space long before it was a park. 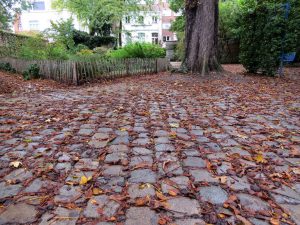 The cobbles seem old. Perhaps it was a courtyard? Perhaps a mews yard serving several of the houses around with stables for horses and carriages.

What a temptation there must have been to use the land for building! But instead someone with sense decided to create this little oasis of peace. Beautiful. City planners British, American and Swedish, who advocate “densification” (förtätning), please note!

Later, at home I went searching for Abbe — Father Froidure. Why did he get this lovely little urban park?

I still don’t know the full story, but I can report that Edouard Froidure was born in or near Ypres in 1899. He died in Brussels in 1971. A refugee and then a soldier in the Belgian army during the First World War, he became a priest in 1925. And in 1931 became the vicar of the parish of St. Alène in Forest. (The park is on the very edge of the Brussels municipality of Forest.) 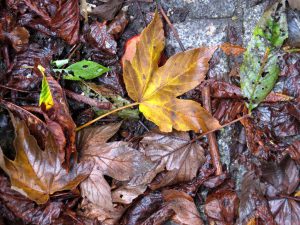 In 1933 he was involved in setting up a movement to enable young children among the urban poor to come out of the slums and spend time in the fresh air. (In camps in the city’s larger parks.) “Les Stations de Plein Air”.

During the Second World War when Belgium was under occupation, he continued his activities on behalf of the children of Brussels. Under cover of this, he worked with the Belgian resistance, including to protect and save the lives of Jewish children. Arrested by the Gestapo in 1942 he was interned in concentration camps and ended up in Dachau. Liberated in 1945, he returned to Belgium and seems to have picked up where he left off. 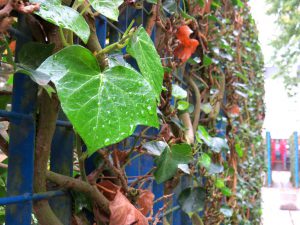 He also worked with (and perhaps helped start) an organisation called “Les Petit Reins” — The Little Nothings. This is still going strong. It’s an organisation staffed by the unemployed, running charity shops and collecting, sorting and selling second-hand clothes.

Obviously the Abbe was a much loved man and a little park dedicated to his memory seems entirely appropriate.