Last week I was visiting England. I took the opportunity of spending a couple of days in Brighton and Hove. This week’s blog entry (late, I’m sorry) is partly an excuse to share some photos.

I was brought up in Brighton. Well, in Hove actually, but the two towns are now one city “The City of Brighton and Hove”. The amalgamated town was granted city status in England in 2011 and according to the Brighton and Hove page of Wikipedia the new city has a population of 273,400. Which makes it the 18th largest British city in terms of population and, more importantly (in the opinion of residents and old Brightonians), ahead of the City of Westminster and the City of London, Oxford and Cambridge, Canterbury and York.

Brightonian, by the way, is the accepted adjective for residents of Brighton, but what is the equivalent for Hove? Hovian doesn’t seem right (although there is a local blog of that name). OxfordDictionaries.com tells me: “No exact match found for “Hovian” in British & World English. Did you mean Jovian?” Well, no, that would be someone from Jupiter, wouldn’t it? OK, how about Hover? The definition seems quite appropriate actually: “Remain poised uncertainly in one place or between two states”. That’s Hove.

When “Brighton and Hove” became a thing, many people of Hove feared their distinct urban identity would be swallowed up by Brighton. That does seem rather to have been borne out by events. Even though the new City Hall is what used to be Hove Town Hall, most people now talk about Brighton rather than Brighton-and-Hove. I can’t say it bothers me terribly, but I know Hove residents who are fighting a rearguard action in typically genteel style by, for example, refusing to address letters to the BN3 postcode area with any identifying name other than Hove.

If you ask someone from Hove if they come from Brighton they will probably say “Hove, actually”. In Hove that counts as a really witty put-down.

I grew up in Hove. First on the border with Portslade, later at the very end of Dyke Road Avenue, up in the hills. The last school that I attended (the last of eight) was also in Hove — the Cardinal Newman Comprehensive School on the Upper Drive. (Yes, I worked my way through eight schools before going off to university. What of it?)

When I was a kid there was a descriptive phrase in circulation to mark the difference between Brighton and Hove. It was “yobs and snobs” – the Brighton kids were yobs and the Hove kids were snobs. I suppose this reflected a perception of a class difference between Brighton and Hove – Hove was more middle-class, more genteel; Brighton was a larger town with a greater variety of people and, I suppose, more workers of various sorts. It was also much more vibrant and with a more interesting history as well as a more interesting current existence.

Or perhaps Brighton had more yobs coming down from London. It was certainly true that if you were standing anywhere on Queens Road at about 10 o’clock of a summer’s morning, you would see a tide of people emerge from Brighton railway station to sweep down Queens Road, past the Clock Tower and on to the seafront. The first cheap train from London came in at about ten. (The first train for which you could buy a Cheap Day Return ticket.) So this was the first train of the day to bring holidaying Londoners to “London by the Sea”.

Gone to the dogs

Not that that meant the people of Hove were all so very much native residents. When I was a kid Hove was a popular place to commute to London from, and of course to retire to. My memory of Hove was of a place with a very high percentage of old people – many of them among the last generation of Imperial civil servants – who spent their days grumbling to one another about how the country had gone to the dogs.

I swore I would never be like that. Consequently (if I am to keep my oath) I can never return to Hove to live. There is a very real danger I would spend my time grumbling to other people of my age about how the country has gone to the dogs.

Fifteen years ago, when it became a city, Brighton and Hove had an unemployment rate over 10%. Even in the town centre, even in the flashy new shopping centre at Churchill Square (well, new and flashy when I was a boy), there seemed to be more shops empty and abandoned than open. Among those that were open, charity shops seemed to dominate. Now it’s obvious that the economy, if not the British economy then at least the economy of the Brighton and Hove area, is on the rise. There are still empty shops and derelict buildings, but by far the majority are open and doing business.

On the other hand there are large numbers of beggars and homeless people camping out in the doorways of the empty shops and in the shelters on the seafront. You cannot walk the streets without being petitioned: “Spare some change, gov?” And I’m not talking about EU beggars. Brighton’s beggars, the ones I saw last week, are largely white and clearly native speakers of English. (If nothing else, the “gov” is a giveaway.)

The weather was cold and damp while I was there, everyone I spoke to told me how I’d just missed the good weather. I shivered to see the homeless in their torn sleeping bags, dirty blankets or cardboard and newspaper beds. I don’t usually give to beggars — I don’t usually carry change (I’ve been suedified – it’s all done with cards now), but I was on holiday and had cash for small purchases, so I gave some of it away.

If the majority of the shops 15 years ago seemed to be charity shops, now I was struck by the number of estate agents. Property prices are booming and property renovation is going on all over. There’s another reason why I could never move back — I don’t think I could afford it.

Brighton and Hove – especially Hove – was always, as I remember, a bastion of conservatism. Hove and Brighton Pavilion are the two Parliamentary constituencies that embrace central Brighton and Hove. Both returned Tory MPs one after another in all the election of the 50s, 60s, 70s, and 80s. Then in 1997 the total bankruptcy of the post-Thatcher Conservative Party was revealed when both Hove and Brighton Pavilion were captured by Labour.

I sat up all night at home in Sweden and watched the results come in and when Hove went Labour I knew I was witnessing something historic.

Labour held Brighton Pavilion till 2010 when they lost it again, but not to the Tories. In 2010 Brighton Pavilion returned Britain’s first Green MP, Caroline Lucas. A seat she held onto in the recent election now in May. Meanwhile, the Tories clawed Hove back in 2010, but in 2015 have lost it, again to Labour.

Meanwhile the Greens were in (minority) control of Brighton and Hove City council for four years between 2011 and 2015. You can see their legacy in all the cycle lanes and pedestrianised or part-pedestrianised streets.

But regardless of politics and economics, of poverty and affluence, the sea and the seafront (or the Front, as we call it) are much the same as ever. Even the wreck of the West Pier is still there, though looking smaller and tidier now the most dangerous bits of the structure have been removed. (See the photo that heads this post.) The Pier that Wouldn’t Die. A fire burned it out, then explosives failed to destroy it, then a salvage vessel failed to dismantle it. Storms have broken over it for years, but still it stands. It’s a feature and photo opportunity that must be known around the world by now. (My local pride is showing I fear.)

I spent a full day in Brighton and walked along the Front, passed the Angel of Peace. (Who turns out to have nothing to do with a peace treaty between Brighton and Hove as I used to believe. I’m quite disappointed.) On to the beach and across the shingle, down to the breaking waves. Far out to sea the misty shapes of cargo vessels are following the mark of what Kipling called “the Channel’s leaden line”. Eager dogs are chasing driftwood while sporty types jog along the promenade or run up and down the shingle banks between the beach and the prom.

As the rain that had held off for my walk started to fall I took myself into Hove Library. It was a pleasure to see the library is still in operation, and clearly well used. But it was also a relief to find the building hasn’t been replaced. I walked into the children’s section and my feet took me automatically to the wall where the good books used to be.

No more. The tall book cases I remember have been switched for low ones displaying colourful covers instead of the rather drab institutional bindings the books used to have. But still, here was where I found the Moomins and the Railway Children and Dr Dolittle. Here is where I explored Swallowdale and Coral Island and dived 20,000 Leagues under the Sea. Where I stepped across the Wrinkle in Time or listened to the Wolves howling about Willoughby Chase. And then upstairs to the corner of the general library where they used to keep all the history books. My salvation throughout my O and A Levels. This is a lot more as I remember it, though they have English Literature here now.

When one has read so much about libraries being forced to dumb down or give away or sell stock or simply close, it’s good to see that Hove still has the right idea.

And on that note, as I see I’m pushing 1750 words, I shall close this text that started out as just a vehicle for my photos. There may be more next week! 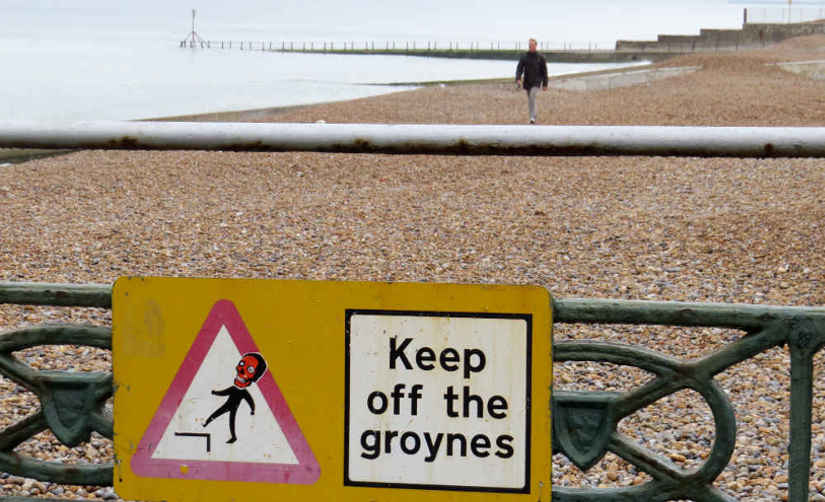 Only, from the long line of spray
Where the sea meets the moon-blanch’d land,
Listen! you hear the grating roar
Of pebbles which the waves draw back, and fling,
At their return, up the high strand,
Begin, and cease, and then again begin,
With tremulous cadence slow, and bring
The eternal note of sadness in.

From “Dover Beach” by Matthew Arnold

5 thoughts on “Brighton and Hove, actually – my home town”