There has been a bit of a hiatus here At the Quill. I’ve been busy getting my travel blog up and running at Stops and Stories. Now I am returning as planned to publish occasional pieces here. My first piece must be about Elin’s Story. 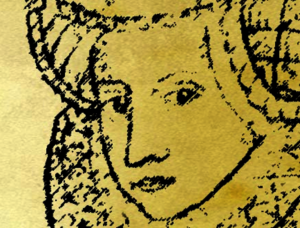 Elin was born in 1549 or 1550 – probably in January or February 1550. An uncertainty about years of birth in the period is usually tied up with those months. She was born in Sweden, in all probability at her father’s estate of Fyllingarum in a Östergötland.

In 1565, when she was about 15, she was taken to England in the train of Princess Cecilia Vasa, and left there as a maid at the court of Queen Elizabeth I. When she was 21 she married the Queen’s step uncle, William Parr, Marquess of Northampton. On his death, five months later, she returned to the Queen’s Court as the dowager Marchioness Northampton, a lady in waiting.

In 1576 she made a second, secret marriage to Thomas Gorges. Gorges was one of the Queen’s Gentleman and very distant relative of Queen Elizabeth. The secret was uncovered and she was banished from Court accused of high treason. Her husband spent time in prison, possibly in the Tower of London, while Elin was placed under house arrest in his London home. However, this dark cloud passed, the couple were reinstated at court and Elin lived on into her 80s. She outlived the Queen by a good 20 years. She and her second husband are entombed at Salisbury Cathedral.

I began writing Elin’s Story seven years ago, and it’s gone through a number of transformations along the way. This year I started outlining the first and second books. (The working titles are The Long Way to London and London: Credit and Debit.) Now I’m now trying to apply the NaNoWriMo methodology to get a first draft written.

For readers who are unfamiliar with it, NaNoWriMo (= the National Novel Writing Month) is an international “let’s all try to write a novel” exercise. It takes place in November every year. The objective is to write a 50,000 word novel within the 30 days of November. Participants post information about their progress and pep one another. At the end, if they’ve completed their effort, they can get a certificate. I know some writers use it as a device to help them focus and get the first draft of a novel written. (Others go straight from writing for the NaNoWriMo to self-publication with barely a pause between. With all the quality that implies, he sniffed.)

I am absolutely sure that November is the worst possible month for me to get involved, so I’ve never even considered participating. However I do like the idea of trying to force myself to write daily and copiously simply in order to tell the story and get a beginning-to-end draft written. So, I decided that this September I would focus on Elin’s Story. I’ll see what I can achieve with The Long Way to London.

My target is to write 2000 words a day for Elin and my ambition is to write daily throughout September. Both these targets are necessarily flexible. I managed to fall ill soon after the beginning of September and let myself off writing for three days as I was running a temperature, which means it wasn’t until yesterday that I completed my first seven days of writing.

I’ve covered introducing my heroine, the death of her father and her relationship with her family especially her sister Gertrud. I’ve got an appointment for her to meet Princess Cecilia and encouraged her to say goodbye to her home. Elin’s sections of the story are told in the first person, but to give a variety of perspectives I’ve also introduced a secondary character, George North. He’s an Englishman working for Princess Cecilia whose story is told from a less intimate point of view. George is in Stockholm at the moment, waiting to meet King Erik XIV.

I originally published this article on the separate At the Quill website. Copied it to TheSupercargo main website 3 March 2017.