I did think I would produce a blog entry or two while I was home, but it turned out that I was away. Visiting home but away on holiday. I found I had little inclination and less time for any of this bloggety-blogging.

It’s an odd sort of existence we’re living, Mrs SC and myself. Away in Brussels, physically, at work and play for weeks, even months at a time; but spiritually, emotionally (and legally – for the purpose of taxation) still anchored at home in Gothenburg.

Where we are mentally is an open question.

We flew into Gothenburg at the beginning of August, took ourselves home and spent several happy hours enjoying the familiarity and comfort of our own four walls. Our sofa, our books, the views from our windows, the taste of cold, fresh, soft water from our tap in our kitchen. And our glassed-in balcony, especially that, where I sit to drink my tea in the early morning light, where we sit to sip our nightcaps in the soft gloaming before going to bed.

Three weeks we were there, and not a dead day. There was always something to do, somewhere to go, friends to meet, old familiar haunts to visit, changes to note. All through the long, drawn-out Scandinavian summer days and the short, somewhat cooler, Scandinavian summer nights.

Everybody we met told us how lucky we were with the weather. July, they said, shaking their heads. June, they sighed, shivering. But August – in August the sun shone. It shone almost every day we were home. And every day we checked the weather apps for Brussels and saw: cloudy, overcast, chance of rain, thunder. With what Schadenfreud we looked up from our smartphones and congratulated one another on having come home for our holidays! This, we told each other, this is what it’s really like. (Forgetting the rain and the storm and the ice in the winter, forgetting the long, dark nights punctuated by short dull days.) No, no, this, this is home.

Places resonate, especially places one has visited many times before, where things have happened and the fabric of the place is dense with memory. Here’s one such. Trädgårdsföreningen – the Garden Society park.

This summer it was enriched with a temporary display – in association with the open-air sculpture park at Pilane on Tjörn – of apparently abstract sculptures by Tony Cragg.

Only apparently abstract, because after you’ve stared at them for some time you suddenly see a face, a profile, a nose and lips, a chin and a forehead, and then you realise there are faces everywhere in the sculptures, smiling, frowning, gazing profoundly or blankly into the middle distance. Knock on one, hear its tone.

I saw the sculptures my first Monday at home in Gothenburg, and again on my last Thursday. My last Thursday after sitting by the Bältespännar fountain just outside the park entrance, watching a piece of performance art being filmed.

A woman dressed and made-up to look like a statue, a living statue, walking slowly, meditatively in a wide circle around the fountain past the children playing in the spray of the water, past the young families, past the schoolchildren in a group with their teacher. Followed and filmed, not just by her own two cameramen, not just by me, but also by the families, by the schoolchildren, by random passers-by with their mobile phones.

And back in the park, that first Monday, beyond Tony Cragg’s sculptures, beyond the palm house, in the rose garden with more fountains and children playing. I sat on a bench in the sun next to a mother with her young son. As he ran about, she followed him with her eyes and sometimes her voice, calling out in a language not Swedish. An older man sitting along the bench from her asks, is that Portuguese?

She laughs and tells him, no, it’s Bulgarian. 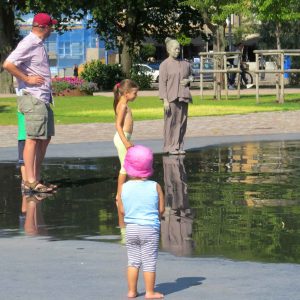 Ah, says the man, Bulgaria. I drove through Bulgaria. I used to drive trucks from Teheran.

That’s a long way, she says.

Yes, he says, days. There was always a break at Istanbul though. This was a long time ago, back before they built the bridge. You had to wait for the ferry.

I’ve never been to Istanbul, the woman says.

It’s a great city, he says. You should go.

I miss this. Being able to eavesdrop on a conversation. I can’t do it in Brussels – unless people are speaking English or Swedish – I can only watch body language and make a guess at what’s going on. It’s quite fun, but it’s not the same.

That first Monday, when the sun got too hot, I took myself indoors, into the empty dusk of The Rose Cafe – everyone, all the sun-starved Swedes, all the foreign tourists, they were all outside. I bought a salad and sent a text message and waited to meet my friend Kristina. As I arrived in Gothenburg, so she was leaving. That first Monday in August was our one day of overlap.

Kristina brought me a copy to buy of her latest book, #författarboken (#theauthorbook), and a copy to see of her travel guide to Nice, Mitt Nice. 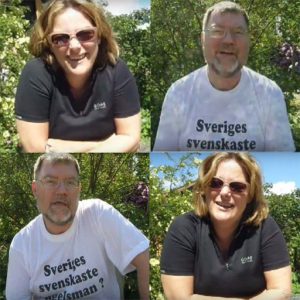 Trädgårdsföreningen’s rose garden is where we first met, years ago. We were both taking part in an Internet-based competition to find someone to represent the Swedish Hostelling Association for a summer reality show/vlog. Competitors, but we had similar ideas about authorial self-promotion and we pooled resources for a promo pitch. It’s still up on my YouTube site. We neither of us won the competition, which was a bit of a disappointment at the time, but we did find one another. We were both wannabe authors. Now that just describes me. Kristina is an author, a published author with four titles to her name, two of which – the two on the table – came out this year. It’s obvious which one of us had the gumption and get-up-and-go. 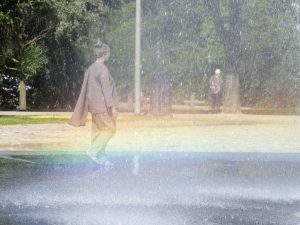 But I’m getting there. (He added, optimistically.)

And that was just the Monday. There was more, much more to come. Maybe there’ll be more here in a future blog post, but for now I think I’ll close.

Here’s hoping your summer holiday (or your winter holiday, if you live in the opposite hemisphere) was just as enjoyable.

3 thoughts on “Home but away – sculpture and people”