I have been thinking about black boxes. Thinking in particular about the black box that they’re searching for from the Malaysian aircraft that disappeared.

I imagine this black box… 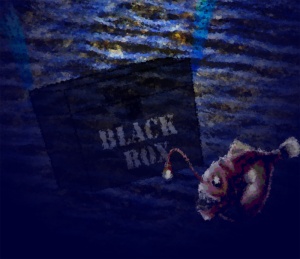 It’s a metal box, slightly longer than wide, slightly wider than deep. A black metal box, like one I once owned, with a clasp at the front for a padlock.

I imagine it in the water, sinking. The light fades and the box sinks, fathom after fathom deep, deeper than light reaches, deep into darkness. Finally it grounds, and as it strikes the bottom, a great cloud of mud and debris billows up around, obscuring it for a time, then sinking back and leaving it there in the sand and the silt at the bottom of the ocean, half exposed – black in the dark – invisible but for the regular, persistent pulse that it sends out to the world saying: Here! I’m here, here with my memories. Come and find me!

And there, ignored by the benthic beasts and the other inhabitants of the abyss – the giant squids and the angler fish, self-illuminated monsters of the deep – it calls. And nobody hears. Even though we are listening for it. Listening with all the technology that we possess. Maybe it’s here and maybe it’s there. The search goes on up above, but nobody knows where it is and though it tries and tries, for days and weeks, eventually its batteries weaken, the sound dies and finally the black box lies in silence at the bottom of the ocean and its memories are lost.

Oh yes, I know it’s a misnomer. Black boxes are anything but black, manufactured in bright colours, in fluorescent colours for all I know, to be easy to find. Far tougher than my old tin box too, built to withstand the pressures deep under the sea. And this black box is unlikely to have become detached from the aircraft of which it was a part. It’s probably locked still inside the wreckage. And maybe, maybe it will yet be localised. Maybe the search will find it, maybe it will be retrieved, it and its memories, and we’ll find out what really happened aboard flight MH 370.

Have you noticed how, when filmmakers want to contrast the experience of air and water, they contrast sound and silence? Sound in air, silence under water. When a swimmer breaks the surface of the water or plunges beneath. Clarity and sharpness above; a muffled, dull, distortion below. And that’s our experience too: the children’s laughter on the beach, by the pool, dulled or obliterated when we dive into the silent world.

Yet, when they were looking for the black box one of the comments I remember was: “It’s difficult to hear the beeps black boxes emit against all the other sounds – because the ocean is a noisy place.”

The ocean is a noisy place

And now, like me, you think of whales, calling, singing to one another across the distances underwater, and, sure, there’s that sound, but there’s more. So much our air-adjusted ears can’t hear. There are the geological noises of earthquake and eruption, the mechanical sounds of tankers, cargo vessels, factory ships and liners, the grinding of drilling rigs and the explosions of prospectors, the sounds of naval war-and-peace – the carriers, the cruisers, the battleships, the sonar.

Water carries sound far, far further than the air carries it. To our ears it appears muted, but to the sea’s creatures the sound of the sea is rich. And nowadays, since man increasingly has polluted the ocean also with noise, it is cacophony.

And into all this noise the black box sends out its cry. It’s little, bleak: I’m here! And we too send out our cries, our little cries: I’m here! Come find me! Drowned in the cacophony all around.

To hear some of the sounds of the sea visit this BBC website. The anglerfish in the illustration started life on the pages of Wikimedia commons.
This article was written for the #Blogg52 challenge.
I originally published this article on the separate At the Quill website. I revised it for spelling and carried out some SEO fine-tuning – and added a featured image – before transferring it here on 30 March 2017.