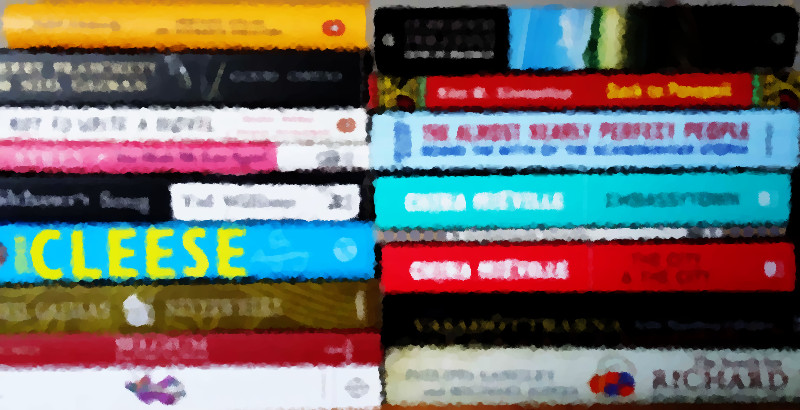 Below is a list of all the books I managed to read (or at least partly read) in 2015. Thirty titles. Not nearly on a par with the days of my boyhood and youth when I could get through five or more in a week, but not too bad. Better than last year (I suspect). One of my New Year Resolutions is to read 50 books in 2016. I wonder how that will go. [It went great!]

Ayres, You Made Me Late Again
Poetry (largely comic). This was a birthday present from my mother who loves Pam Ayres. Well, she makes me smile too, quite often.
Banks, Consider Phlebas
Science fiction, novel, re-read. Following the sad death of Iain (M) Banks in 2014 I started to re-read the books of his that I had on my shelves. This was his first published SF novel and I still think it one of his best.
Banks, The State of the Art
Science fiction, short stories, re-read.
Bohem-Duchen, Chagall
Art, biography and art criticism, read part. See my Stops and Stories review of the Chagall exhibition in Brussels.
Booth, The Almost Nearly Perfect People
Journalism, about the Nordic countries, good on Denmark, shaky on Norway, Finland and Iceland, poor on Sweden. A review on the Guardian website by Mariella Frostrupp.
Brayfield and Sprott, Writing Historical Fiction
Good “how to” book from Writers and Artists (Bloomsbury), includes some interesting contributions from a wide range of history writers, some written specially for this book.
Christopher, The Tripods Trilogy
Children’s (really “boy’s own” – I see Wikipedia calls them Young Adult) science fiction, read for the sake of nostalgia. I have read parts 2 & 3 before, but I think this was the first time I read part 1.
Cleese, So, Anyway
Good autobiography by John Cleese. See my review here.
Gaiman, Neverwhere
Neil Gaiman’s novelisation of his TV series – “the author’s preferred version”. I didn’t see that it strayed far from what I remember on screen.
Humes, Belgium: Long united, Long Divided
History of Belgium by American historian. (An amateur historian?) Interesting subject and information, but dreadfully boring and repetitive in style. I didn’t finish reading it, but will revisit in 2016 and take another run at it.
Hunt, Walking the Woods and the Water
Traveller’s tales. Eighty years on (in 2013) Nick Hunt walks in a cloud of cigarette smoke from Hook of Holland to Constantinople in the footsteps of Patrick Leigh Fermor (see below). Good read – to be honest often an easier read than Leigh Fermore. I may revisit this in 2016 for a Stops and Stories review.
Kimselius, Back to Pompeii
Children’s historical/time-travel adventure. Re-read in order to winkle out some Americanisms and slips for Kim’s new edition. My earlier review of this here.
Kimselius, Att Skriver med Glädje
“How to” book for (young) writers – includes a short autobiographical essay by Kim Kimselius – which was actually the only bit I read. (Sorry Kim! But that was the bit I found most interesting.)
Langley and Jones, The Search for Richard III
Account of the archaeological excavation in the Leicester car park that unearthed the bones of King Richard III. Told in alternating chapters by the authors. Langley, who was the motive force behind the excavation, and Jones, who is a historian and writes about Richerd III, his life and times and the events that lead up to his death and burial. Here’s a review of the book on The Guardian’s website.
Leigh Fermor, The Broken Road
The missing third part of the trilogy describing Patrick Leigh Fermor’s journey as an 18-year-old, walking from Hook of Holland to Constantiople in 1933. The earlier two parts – A Time of Gifts (published 1977) and Between the Woods and the Water (1986) took him to the Iron Gates, this final volume – published posthumously – carries the story on through Romania, Bulgaria, Turkey and finally to Mount Athos in Greece. Paddy Fermor died in 2011 aged 96.
Leone, By its Cover
Detective story, set in Venice.
Lispector, The Hour of the Star
Experimental novel by Brazilian author Clarice Lispector. An odd but fascinating little novel. Some wonderful imagery. I was introduced to this author in 2015 by my Blogg52 friend Eva Ullerud – in this Swedish language blog entry.
Mantel, The Assassination of Margaret Thatcher
Short stories – some of them rather good. (This was a Christmas present from my sister – thanks Lin!) The title story upset a lot of people when it was published – more (I suspect) for the title than for its contents which I found less satisfying than, for example, “Harley Street”.

Hilary Mantel is the author of Wolf Hall and Bring Up The Bodies, two highly successful historical novels about Thomas Cromwell, both now turned into TV series.

Miéville, The City and the City
Science fiction/noir detective story. Very, very good read. One of the best of all these books. A review may come later, either here or in Stops and Stories. In the meantime here is Michael Moorcock’s review in the Guardian. China Miéville’s Wikipedia page here.
Miéville, Embassytown
Science fiction. Excellent novel, if not quite as much for me as The City and the City. A review in the American literary magazine Kirkus.
Mosse, The Mistletoe Bride and Other Haunting Tales
Short stories by Kate Mosse the author of Labyrinth and the Languedoc Trilogy. Picked up by chance while I was travelling in England last spring, this surprised me. I enjoyed it and think I should perhaps give Kate Moss’s novels a chance (the blurb has put me off Labyrinth till now).
Mullan, How Novels Work
Good reference work for writers and wannabe writers. This was my first book of the year and I’m saddened to find I don’t remember so much of it. But I remember I liked reading it and thought it useful.
Newman and Mittelmark, How not to Write a Novel
Humorous presentation of some of the many things an author can do to ensure his/her manuscript is unreadable. Disturbed to discover I was at first unable to see what was wrong with some of the suggestions.
Pratchett and Gaiman, Good Omens
Comic, fantasy. Good Omens: The Nice and Accurate Prophecies of Agnes Nutter, Witch by Terry Pratchett and Neil Gaiman. One of the many books I missed when I was reeading so little in the 90s and 00s. Glad I was able to put that right at last. Reading this was prompted by the death of Terry Pratchett. Too many good people have died recently.
Reynolds, The Oslo Tram
Poetry. I had a sudden hankering to re-read this and bought a second-hand copy on line though ABE Books. Oliver Reynolds poem of a man who imagines what his reincarnation as a blue Oslo tram would be like is a fine poem that has stuck in my head for years. (There are more poems than just the title one in the book too!)
Sacks, On The Move
Oliver Sacks’ autobiography. See my review.
Schalansky, Pocket Atlas of Remote Islands
Judith Schalansky’s little gem of a book – part travellers’ tales, part atlas, entirely poetic in its own special way. See my review.
Stoppard, The Real Inspector Hound
Play. I was at home in Sweden and saw this slim little volume on my shelves. Picked it up and re-read it in an evening. I don’t think I’ve ever (yet) seen it performed.
Tegeborg Falkdalen, Vasa Döttrarna
Very good history book about the daughters of Gustav Vasa. I have still to read the second half, saving for later in 2016. Here’s a review (in Swedish) from Dagens Nyheter.
Williams, Tailchaser's Song
Fantasy novel. Does for cats what Richard Adams did for rabbits in Watership Down. Rather good (though not quite as good as Watership Down IMHO). Another of those books I missed out on earlier.