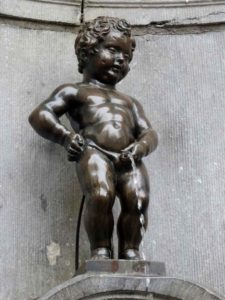 Nowadays, if asked to invent a mascot for a capital city, it’s hard to believe that anyone would come up with this idea. “I see a little boy, right, and he’s naked, holding his penis and pissing!” Hard to believe anyone not an adolescent member of certain student fraternities at any rate. But Manneken Pis, the ancient symbol of Brussels is exactly that.

Illustrations of the little statuette (it’s only about 60cm tall) crop up in all sorts of official publicity and advertising around the city. Chocolatiers produce models of him in chocolate, solid or filled with ganache. Signposts direct locals and tourists alike to visit the figure. 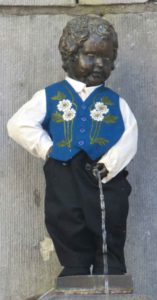 On special occasions – several times a week – a street parade marches to his fountain and dresses him up appropriately. This photo (left) shows him in his “Swedish” costume on June 6th 2015. His wardrobe, of several hundred costumes, is on display in a special room of the City Museum on the Grand-Place.

Manneken Pis has been plumbed into the city water supply since 1619. The present statue is a replica of the original which is now also kept in the City Museum. (And the original is said to have been a replacement for an earlier pissing boy from the 14th century.) The plumbing is not permanent, and the statue is sometimes instead connected to a beer keg in order to piss beer.

All this begs the question, why? Ask and you get a variety of answers, not all of which are mutually exclusive. Some people will tell you one or other of the myths. The hero-child who urinated on the city’s enemies from up in a tree, or put out the fuse of a bomb set to demolish the city by peeing on it. (See Wikipedia for a selection of these.) Others say the figure commemorates a lost child who was eventually found, untroubled by his disappearance and casually relieving himself on a street corner. People will also tell you that Manneken Pis represents the spirit of the ordinary people of Brussels and their attitude towards authority. 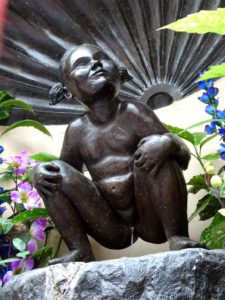 This latter interpretation seems to be especially popular – and perhaps has more to recommend it – in explaining the other two pissing statues. Because Manneken Pis is no longer alone. 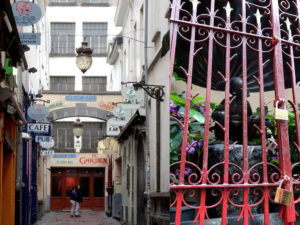 Unlike the Manneken, you have to go out of your way to look for Jeanneke – unless your way takes you to Brussels’ internationally famous Delirium Café, which has colonised the whole of the Impasse de la Fidélité. Sad to say, I’ve heard no stories of Jeanneke ever being connected to any of Delirium’s many beer kegs. She is kept behind lock and bar, but you are encouraged to toss coins into the fountain basin for good luck and to help support charity. 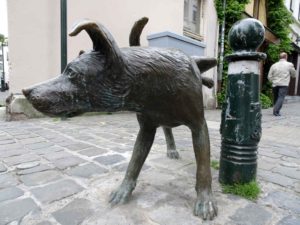 And then in 1999 a third participant joined the Brussels pissing contest. Het Zinneke – usually called Zinneke Pis – is a mongrel dog cocking its leg on a bollard on the corner of rue des Chartreux and rue du Vieux-Marché. Unlike Manneken and Jeanneke, Zinneke is not plumbed in, so in real terms he loses the contest immediately. However the dog has other advantages. He is not locked away or behind bars and you can pat him and (if really desperate I suppose) take selfies with him.

Zinneke is the Brussels dialect name for the river that runs through (now mostly under) Brussels – the Senne or Zenne. It’s also the name for a mixed breed dog – and by extension for the mongrel folk of Brussels.

The Zinneke Parade, a bi-annual Brussels carnival, takes its name from the same source as the dog. Perhaps it was also inspired by Het Zinneke. The first Parade took place when Brussels was European City of Culture in 2000. Planning and preparation must have started around the same time Het Zinneke was installed.

The route of the parade seems usually to take in all three statues. This year’s parade took place last weekend. I’m still kicking myself for forgetting my camera with me when I went to see what it was all about. Still, you can see lots of other people’s photos here.

As far as I can make out, no one is pissing. 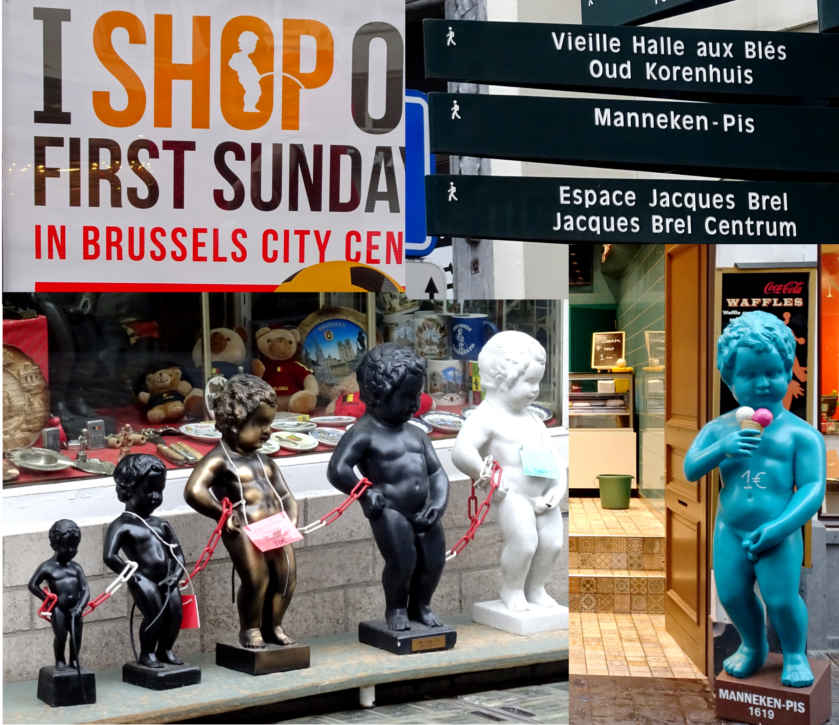