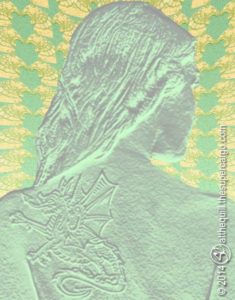 At the January meeting of Gothenburg’s Egenutgivarna, conversation turned – as it often does – to book marketing. I mentioned the story of the Stieg Larsson giveaway campaign: the marketing campaign carried out by Quercus, Stieg Larsson’s British publishers, to promote the first of his books – The Girl with the Dragon Tattoo. Copies of the books were given away free to commuters on the London Underground.

That was the story I’d heard, and I wasn’t sure if anyone at our meeting knew it. It seemed not. We went on to talk about the economics of such a marketing move in the Swedish context. Giving away whole books felt a bit drastic; someone suggested giving away chapters instead.

However, I had this nagging feeling at the back of my mind that what I had been repeating was perhaps an urban myth, because I’m fairly sure I’d not read about it anywhere but instead been told it as a story.

I worry about passing on urban myths, so eventually I went online to check. The Quercus website includes a page called History, but there’s nothing there beyond the usual bland ‘marketing story’. I searched little further and I found this article from the Independent from 2010. It is part-based on an interview with Mark Smith, one of the founders of Quercus. The article repeated the story I’d heard, though made it somewhat more complicated.

According to the Independent, this is what happened.

Quercus was established in the early 2000s by Mark Smith and Wayne Davies. They were people who knew about the British publishing industry as they were both moving on from other British publishing houses. They set up Quercus and published their first set of books – nicely illustrated factual books which found a modest market.

After the company had become a little bit better established (though “as a new start-up we [were] constantly having to prove ourselves”), they decided to spread their wings. They looked around for authors they could publish in translation. In 2007 they came across Stieg Larsson, whose Millenium trilogy had come out in Sweden (2005-2007) with great success.

Despite the trilogy’s Swedish success, Quercus were able to buy the world rights to the English-language translation relatively cheaply because Stieg Larsson was dead. (He died in 2004, even before the first volume was published.)

Quercus might have got the rights, but they still faced a series of hurdles to overcome. An unknown author (and Larsson was unknown in Britain) is no selling point at the best of times. If he is also dead this is generally considered a further disadvantage. Beyond that, he was a foreigner and books in translation are notoriously difficult to sell in the English speaking world: readers “don’t like authors with funny names” as one bookshop told Quercus to excuse not stocking the book.

Another problem was the title of the first book Män som hatar kvinnor. Calling it Men Who Hate Women was, they decided, not going to help English language sales. The title had to be changed, and that is why we have The Girl with the Dragon Tattoo. (Actually the Swedish title had already been changed – possibly for a similar reason – in the 2006 German translation. In German the book is Verblendung).

Now prepare to have your jaw dropped.

Quercus published The Girl with the Dragon Tattoo in hardback… and sold 8,000 copies!

The figure is so astronomical by comparison to anything one might achieve in the Swedish market that it just takes my breath away. If a Swedish publisher managed to sell 8,000 hardback copies of a first novel I suspect they would be celebrating one of the greatest success in Swedish publishing history. But you’ve got to remember that the British market alone is ten times larger than the Swedish market, and the market beyond the shores of Britain at least ten times greater still.

Which may explain why the 8,000 hardback copies sold “failed to cause much of a stir”, but the sales were good enough to encourage the company to print a paperback edition.

It was the paperback edition that inspired the giveaway marketing campaign, but the campaign was not carefully planned. Rather it was born from necessity – even desperation.

Paperback books have a different market than hardbacks, and the hardback success did not help the paperback.

Once again Quercus was having difficulties getting the book into shops. The situation was so bad the company feared they might be facing financial ruin. This was when they decided to give copies away in the hope of stirring interest. Members of Quercus staff were taking armfuls of books out on the streets of London, giving them to people reading in parks and in cafes, leaving them on the back seats of taxis, on buses and on underground trains.

Written for the Blogg52 challenge.

I originally published this article on the separate At the Quill website. Revised it for spelling and SEO fine-tuning – and added a featured image – before transferring it here on 28 March 2017.