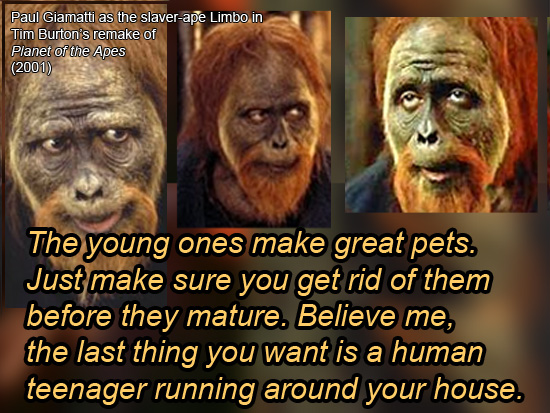 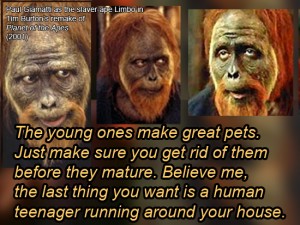 As my own birthday present to myself, I bought a box of DVDs (mostly Science-Fiction related). I anticipate working my way through them bit by succulent bit (inclding, of course, all the Extra Material) and boning out some favourite quotes. Which I plan to share here in postcard form.

As chance would have it, the first film I watched was Tim Burton’s remake of The Planet of the Apes from 2001. It’s not a better film than the 1968 original, but it’s not nearly as poor as the reviews made out – those I read when it first came out and which put me off seeing it on the cinema screen.

Some of the actors behind the mask produced some really fine performances. Tim Roth and Paul Giamatti were outstanding, I thought, and Helena Bonham Carter was pretty damn good too, though her mask was less convincing.

Anyway, my nomination for the best line from the film has to be this one. Spoken by Paul Giamatti as the orangutan slaver, Limbo, who is selling humans as slaves:

The young ones make great pets. Just make sure you get rid of them before they mature. Believe me, the last thing you want is a human teenager running around your house.