The Castelo, the Marinha and the earthquake

The last week in June, Mrs SC and I visited Lisbon – my first visit, her second. In my two most recent blog entries here I focused on a couple of of Lisbon’s “sights” and their history. First off was the Alfama, the oldest part of the city dominated by the Castelo de Sao Jorge. That article retold the story of the 1147 Siege of Lisbon. 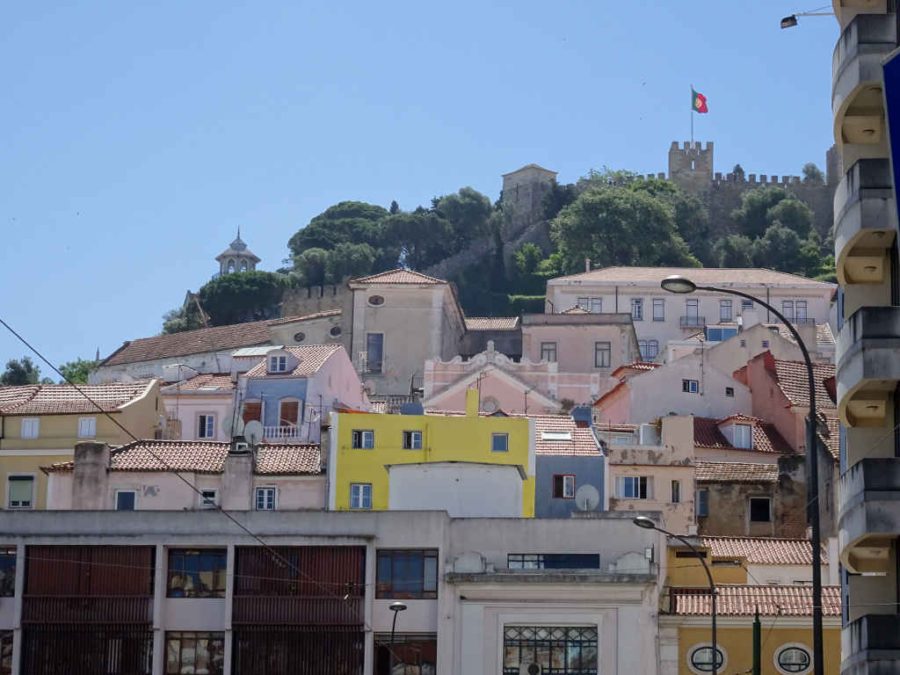 In my second article I wrote about our visit to the Museu de Marinha in Belém and how the museum presents the story of the Portuguese Age of Discovery… and what it leaves out. We didn’t spend the whole day in the Maritime Museum, though, and here’s a picture of an ancient fig tree in the Jardim Botânico Tropical, which turned out to be another good place to rest in the shade. 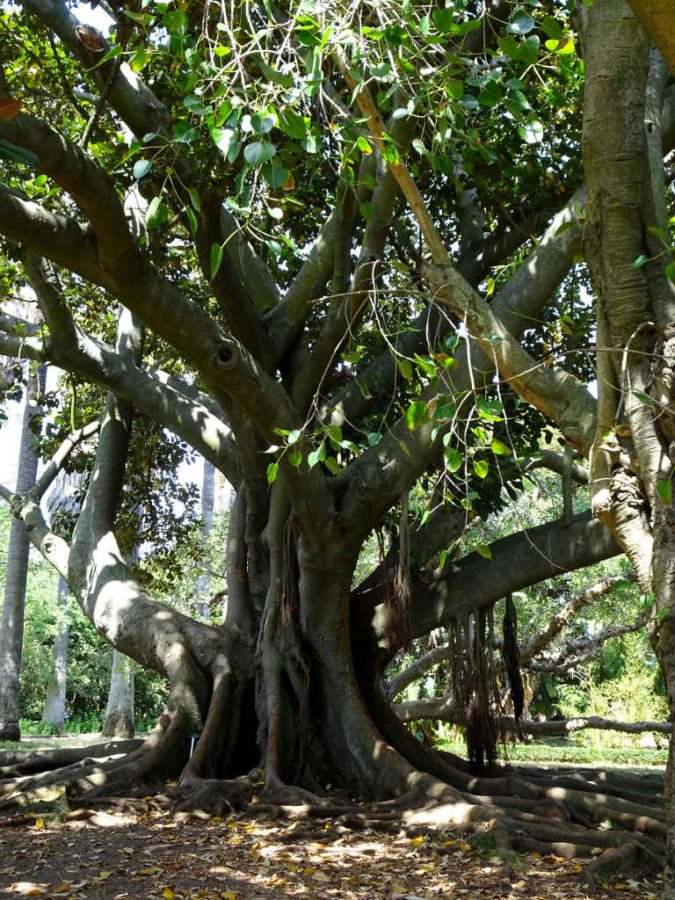 My final article was going to be about the great Lisbon earthquake of 1755, but I’ve had second thoughts. I love history, but I know I can run on a bit. The last couple of entries have been rather wordy, so today’s will be mostly photos. I’ll hold the earthquake over to a later date – or perhaps till after I revisit Lisbon, which I’m tempted to do. We did have a very good time.

But first, allow me just a little more history. I took the next photo on the morning of our first day. We were out scouting for breakfast, walking down the tree-shaded Avenida da Liberdade when I saw this. As you probably remember from school, Christopher Columbus “discovered America” in 1492. 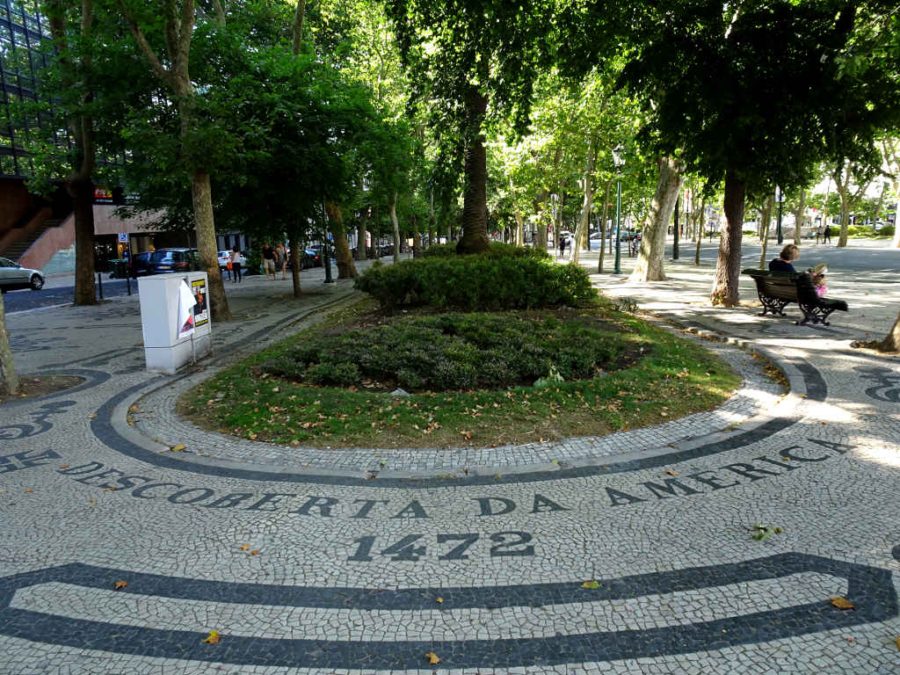 I really thought it was a mistake. The sort of thing that happens sometimes when street painters doze on the job and paint SLOM on a road where they ought to have painted SLOW. But, no. It seems there’s this theory in Portugal that a Portuguese explorer called João Vaz Corte-Real discovered the New Land of the Codfish (Terra Nova do Bacalhau) in 1472. So put that in your pipe and smoke it, you Spanish and American Columbus lovers!

And while you’re doing that, enjoy these photos from a tram ride we took through Lisbon’s Bairro Alto district. 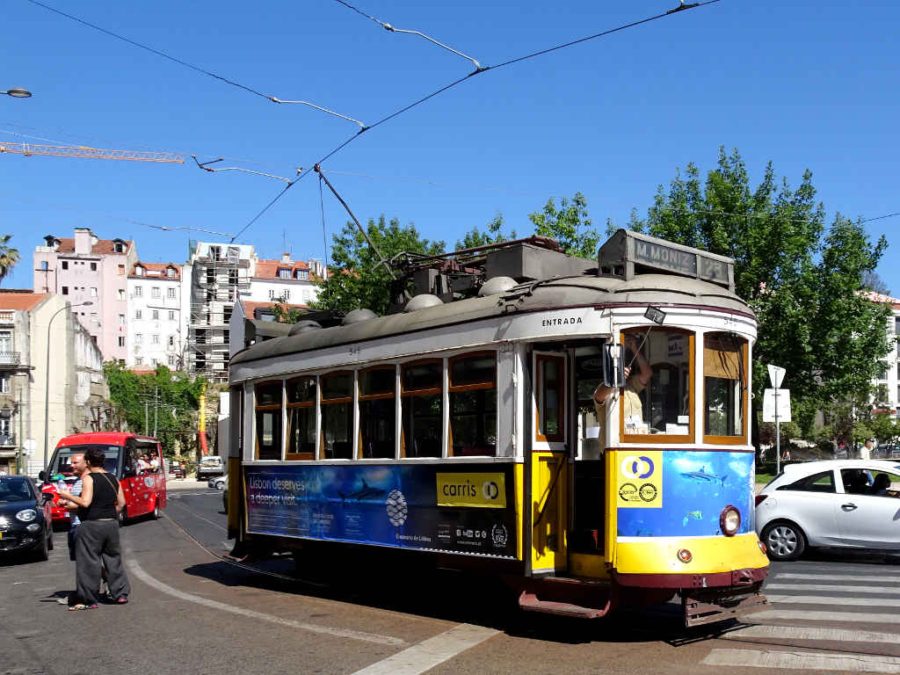 Above is tram number 28 at the Martin Moniz stop.

Below is from the interior of a number 25 tram heading up to Bairro Alto. 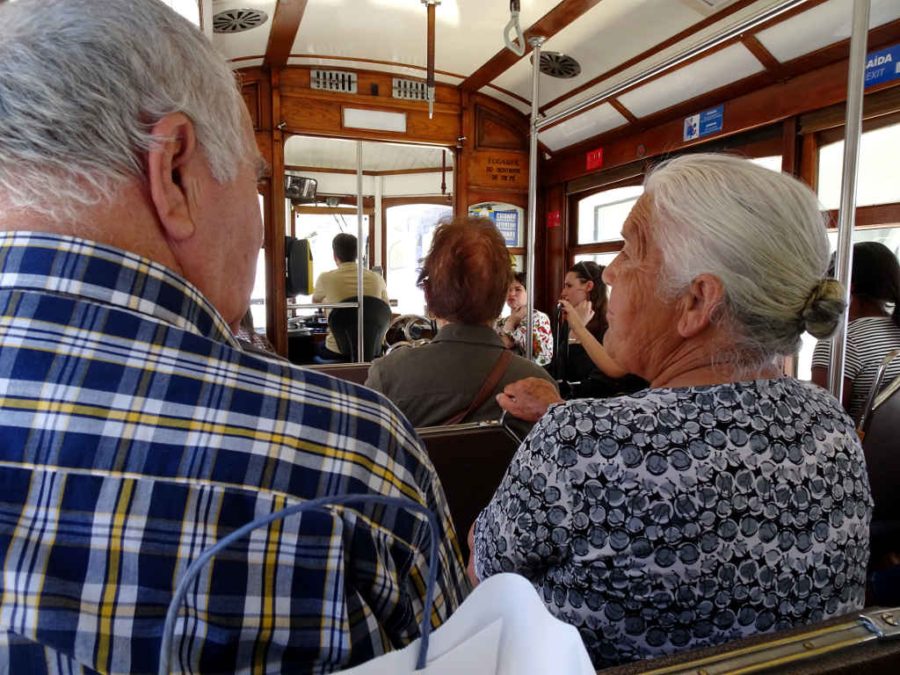 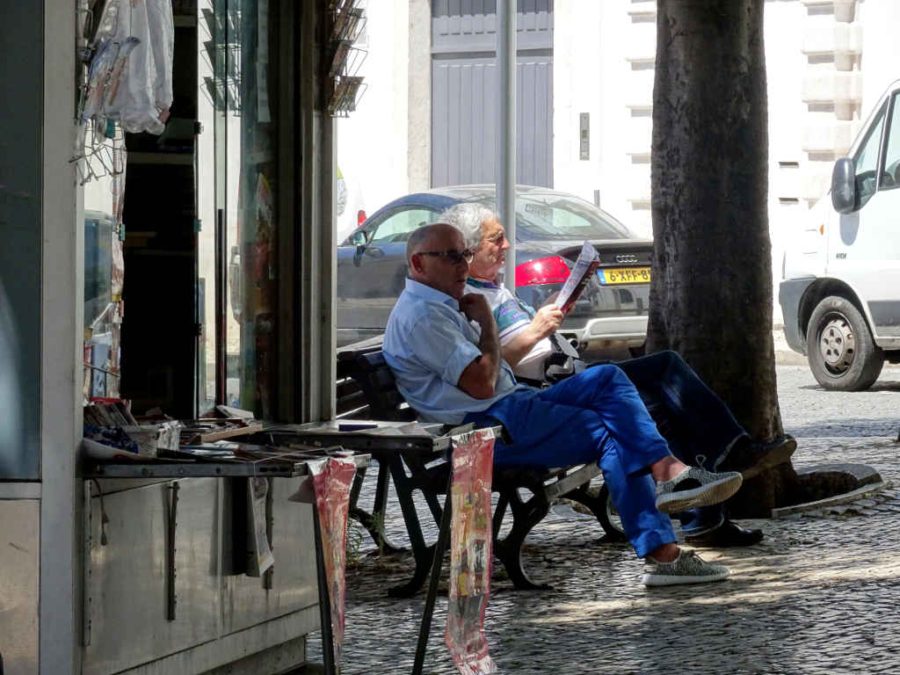 Above: Two gentlemen in the shade by a news kiosk – taken from the tram window.

Below: On the phone with the washing – also taken from the tram window. 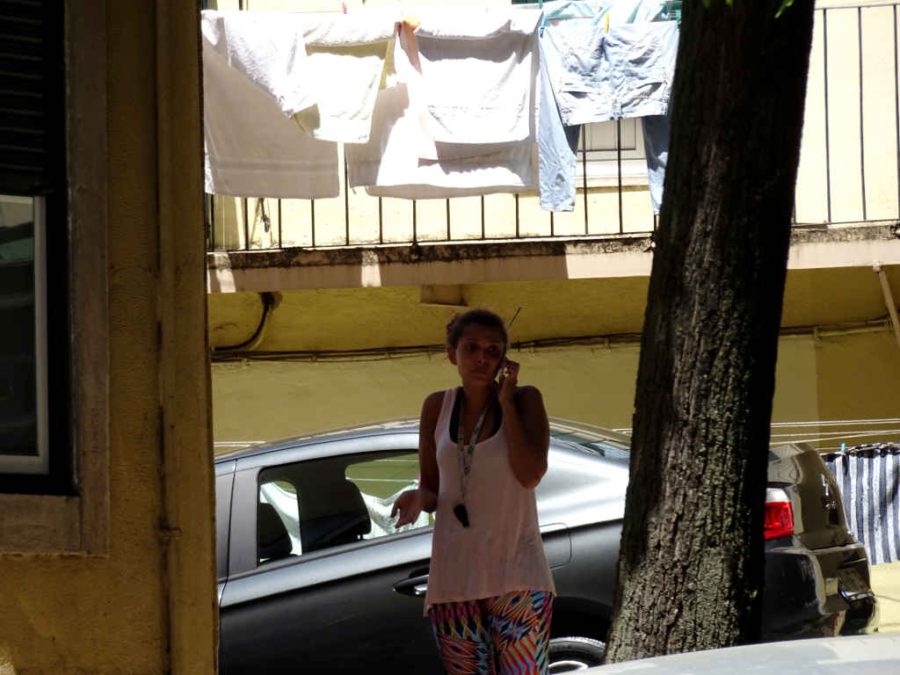 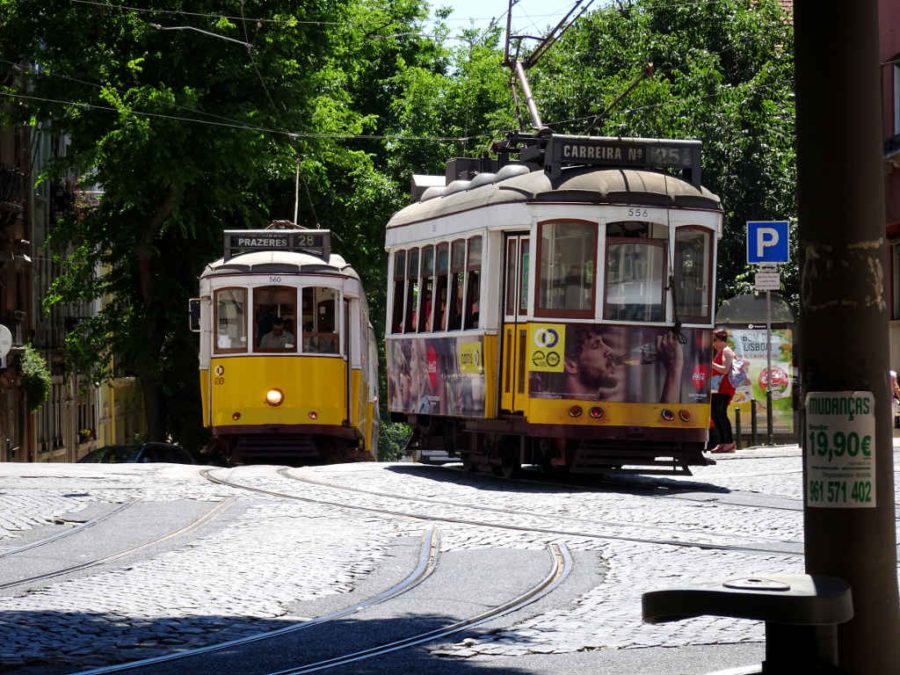 Above: A number 25 and number 28 tram passing on a corner in Barrio Alto. In places the tram lines are so steep I wonder how the trams manage to climb and not slide back.

Below: A Lisbon street seen through a tram window. 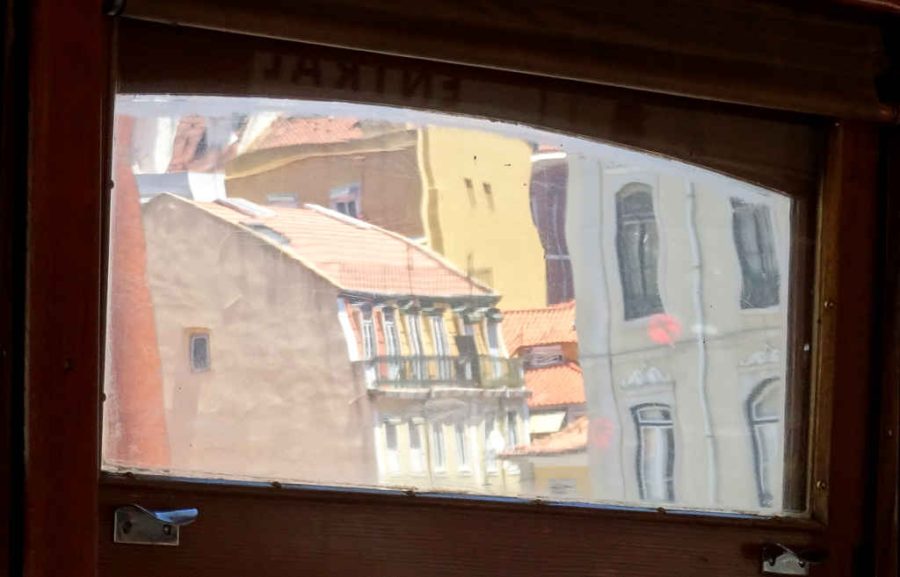 That was how we spent the morning of our final day in Lisbon. For a complete change, we took the metro to the ultra-modern district Parque das Nações and spent the afternoon at Lisbon’s Aquarium. The Oceanário de Lisboa is probably the most child-friendly place we visited on our trip. It was pretty entertaining for two older people without kids too. Here’s one of the sharks. 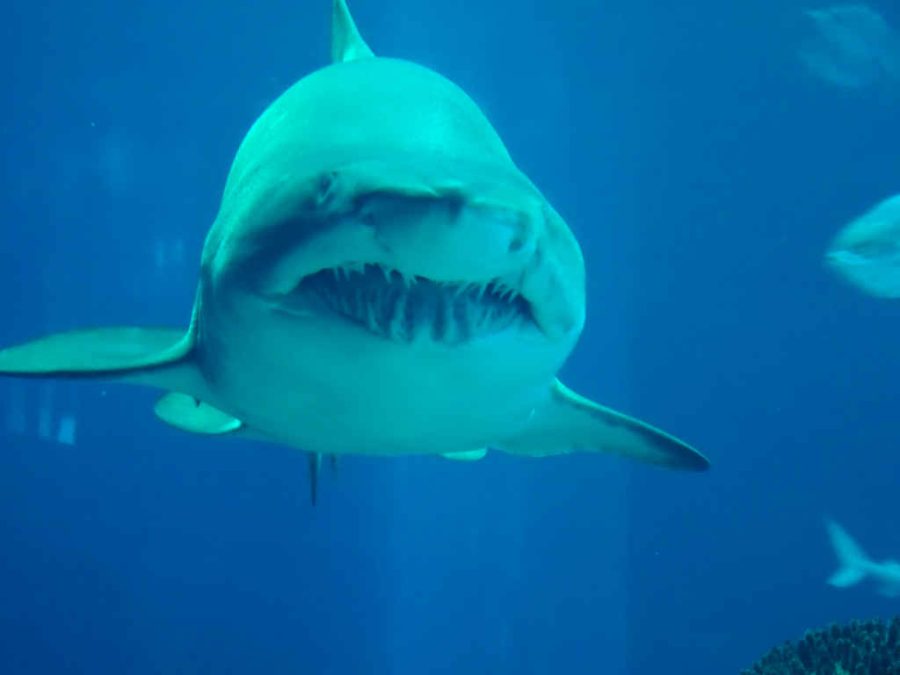 And here is a panorama of silhouettes transfixed by the main ocean tank.

A final couple of pictures to round this off. 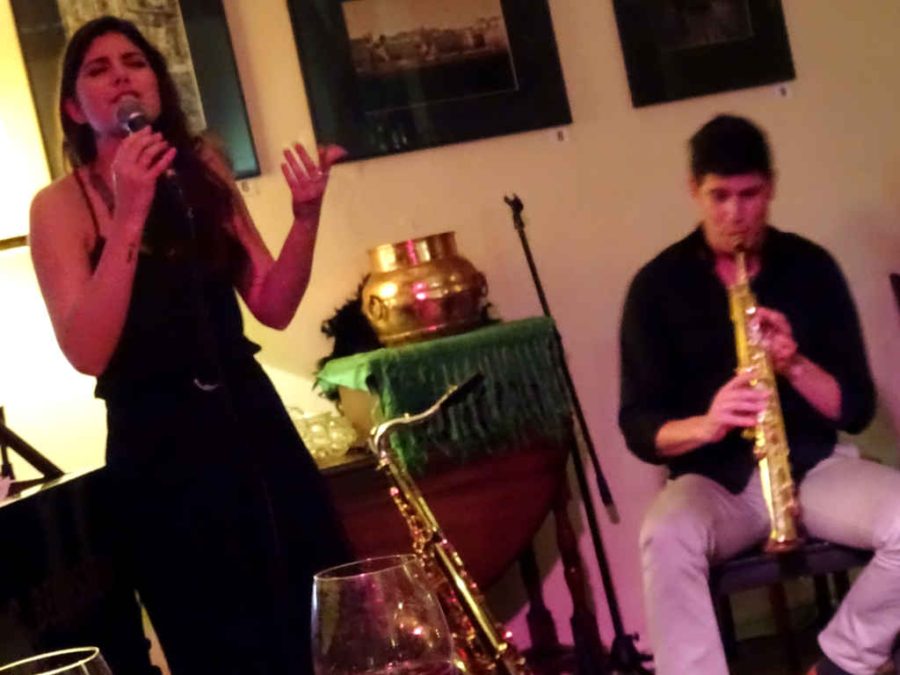 Above: The first evening we went to a Fado bar…

Below: …and I had a glass of sangria. Cheers! 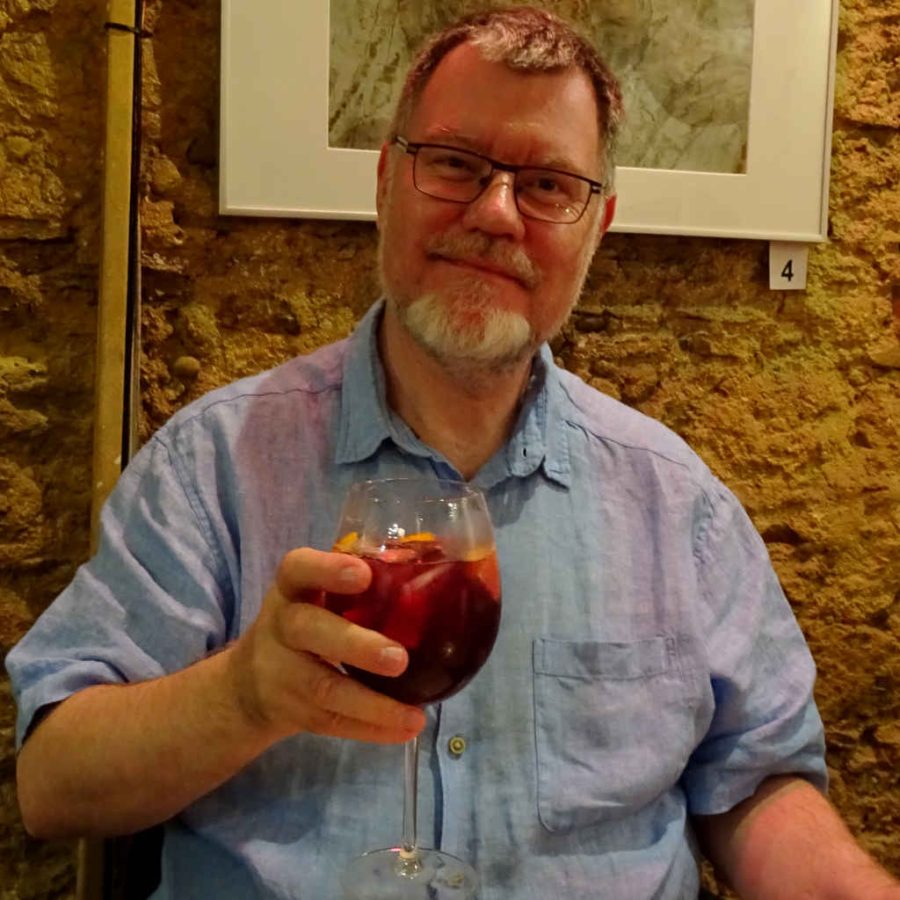 So that was our visit to Lisbon. A very packed schedule, but we had a great time and certainly hope to return one of these days. On the way to the airport the taxi driver asked where we’d been and what we’d seen and then said: “Oh, but you haven’t see Sintra. Sintra is the best.” (It turned out Sintra was where he lived.) So we promised to put Sintra on our list for the next time.

I originally published this article on the separate Stops and Stories website. Transferred here with a little polishing for SEO and a new featured image 6 July 2017.