I like a nice cup of tea in the morning…

In January 1946 George Orwell published an essay discussing the craft of making “A Nice Cup of Tea”. I don’t have a copy to hand, but I think he said he was concerned that the years of war rationing would have caused the British to forget how a proper cup of tea was made. Rationing began in 1940 and continued in some degree until 1954, so 1946 was in the middle of things. (Though Orwell wouldn’t have known that at the time. When he wrote, the war in Europe was over and he might reasonably have expected rationing soon to be phased out.)

The essay appeared completely serious, but reading between the lines you can see that Orwell was probably having some fun. He wrote about “my rules for making a perfect cup of tea, every one of which I regard as golden.”

I read the essay when I was a student at Leeds University. I disagreed with several of his rules — the one about heaps of sugar in particular — but one rule that I liked was the rule about when to add milk. (There is, of course, no question of not adding milk.)

Orwell admits the issue of when to put in the milk is one that has divided the nation – not to mention the families of the nation. He comes down on the side of adding milk to the cup of tea, because it’s easier to see how much milk you need. This was an argument that raged in my own childhood home. I think my mother thought putting the milk in the cup first, then adding the tea, was somehow more refined. With Orwell to back me, I switched to tea first and have never looked back.

… for to start the day, you see

When I graduated from Leeds I had no idea what to do with myself. At that point I didn’t want to go on studying, but I stayed in the city and hung about the University with my friends. To pay my way I also took work where I could. One job was with a steel fabricating company. Basically it was a large workshop constructed under one of the arches of a railway bridge in the town. In the workshop the men built things in steel and then drove them out to various building sites to install them. Fire escapes, the frames for factory doors, metal walkways over vats of seething chemicals, support structures for heavy motors at the top of lift shafts. I was the tea boy.

My job was to get to the workshop every morning before 8am and brew up the the first pot of tea. Then I had to make tea at least four more times during the day — at 11, at 1pm, at 3 and at 5. Orwell would have recognised the process, though it broke most of his rules. First I filled a pan with water and put it on the stove. Then I added a spoonful of tea (Yorkshire Tea), one spoon for each of the men and one for the pot. Then I added the sugar and the milk and brought the whole lot to the boil. When it was the “right” colour — dark orange-brown — I poured it out through a strainer into mugs for everyone.

Though some of the men thought I didn’t put in enough sugar, I think I was quite successful as a tea boy. I was certainly a more successful tea boy than I was lathe operator or a builder’s mate, my other roles in the firm.

And at half past eleven, well, my idea of heaven…

Time passed. I found out what I wanted to do and I moved on. To Birmingham to train as a teacher and then to Bulgaria to take up my first job. In Bulgaria I discovered that the tea I was used to drinking was “black” tea and not terribly popular. The only black tea you could get relatively easily in Sofia in 1982 was from Russia. (Actually from Georgia.) I liked it as little as most Bulgarians. On the other hand you could make it strong and put milk in it, which you couldn’t do with Bulgarian tea. The Bulgarians preferred herbal tea, which I decided must be what Hercule Poirot calls une tisane. (I was right.)

It was possible to buy English tea at the Naafi shop in the basement of the British Embassy. It was teabag tea, PG Tips. PG Tips was the tea we had at home, but never as teabags. My mother wouldn’t be seen dead serving teabag tea. I bought it with shame.

Come New Year I took a holiday from behind the Iron Curtain and visited Vienna, capital of Western vice and magnet for all Balkan expats in those Cold War years. I’d heard tell of a tea shop…

I found it, too. It was an emporium of tea, a palace, a place of wonder where the scent of fine tea enveloped you. As with everywhere else in Vienna, I felt very much out of place. I had travelled from five years of student poverty in England to Bulgaria. There my worn jeans, Doc Martins and winter anorak were clearly western and gave me a certain cachet. That didn’t carry over to Vienna. Now I stood in this polished and scented shop waiting to be served by a polished and scented young man who looked me up and down, but consented to speak with me — in English — and try to sell me something.

I wanted some tea, I said.

For the morning or the afternoon, sir? To drink with lemon or honey? First flush or second flush? Darjeeling, Oolong, Dimbula? Scented or unscented?

I was confounded. Indian? I suggested.

I’m not sure what it was he sold me in the end, but I know it made a nice cup of tea. I decided then that I would learn about tea and next time I went back I would be able to order with confidence. But I never did go back to that shop. Still, I’m now able to put a name to the teas I like to drink.

I like a nice cup of tea with my dinner

For years, in Sweden, it was pointless to buy tea in canteens or cafés. You’d collect a cold cup , then stand in line for a teabag (Liptons Yellow Lable), then get some ice cold milk, pay and finally reach the hot water which would always have a temperature below boiling. What you got in your cup after all that was brown and tepid — if you were lucky. No, better to go with the flow and drink coffee when out, save the tea making for home.

Which is what I did and still do, though changes have taken place over the years. Swedes have learnt to make tea with boiling water, they have embraced the concept of different sorts of tea, they have dared to step away from the teabag.

On the other hand there was quite a narrow window when you could be guaranteed a cup of decent tea in a Swedish café. Pretty soon things went overboard as Sweden became obsessed with green tea, white tea, red tea, herbal tea and scented tea.

There is some really foul stuff that makes your tea taste of cream. Cream! For goodness sake. You should only drink skimmed milk in tea! (That’s one of my golden rules, by the way.) So why would anyone want to make their tea taste of cream?

And a nice cup of tea with my tea

Back to just post Bulgaria. I had gone on and on (and on and on) to my Swedish girlfriend about how to make a proper cup of tea. The warming of the pot, the spoons of tea, the water boiling when it hits the leaves, the three, four or five minutes brewing (depending on the tea), the pouring and straining, the skimmed milk. When I took her home to meet my family and friends I was horrified. Horrified! While I’d been gone, teabags had conquered the country. Even – and this was the greatest betrayal — even my mother was using them! Well, not in my home, damn it. (Unless dire circumstance requires.)

And when it’s time for bed, there’s a lot to be said…

When we moved to Brussels from Sweden at the New Year, we took only two foodstuffs with us. We took a big round tin of Swedish crispbread and we took tins of tea: Earl Grey, Lady Grey, Darjeeling FOP, Lapsang and Södermalm. I thought I’d quickly find a decent tea shop here, but had the tea with me to avoid stress. That worked for a time, but as the level of tea in the tins sank and as I kept on not finding a tea shop, panic set in. No Darjeeling left, no Lady Grey, no Earl Grey. Nearly no Södermalm. I don’t like Lapsang on its own. With no tea to fuel me, how would I be able to write anything?

On Monday I was forced to buy a box of teabags (at least they were Twinings Earl Grey).

At the last minute (actually yesterday evening) my good wife followed a tip from one of her new colleagues. She tracked down a real tea shop and came home with three packets: two sorts of Darjeeling (first and second flush) and a bag of Earl Grey blue flower. Saved!

I shall be making an expedition to the same shop in the near future to stock up. 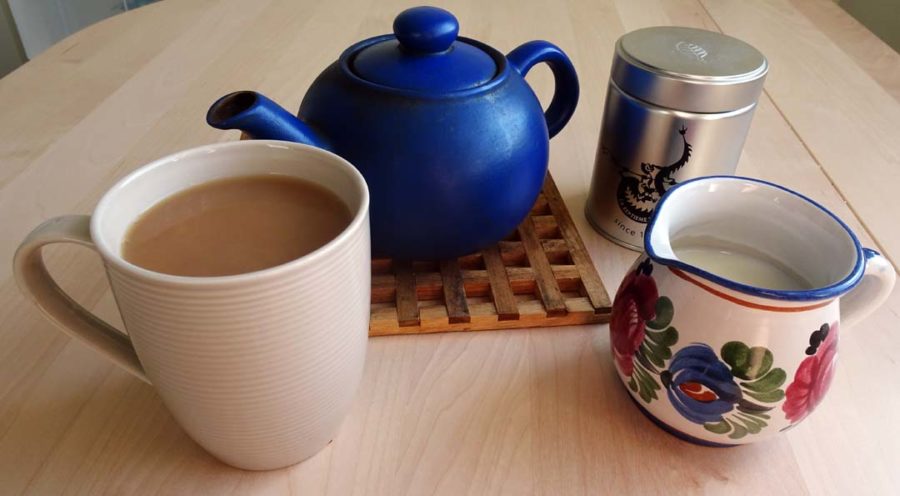 (Mind you, the above was produced exclusively with the help of coffee…)

This article was written for the #Blogg52 challenge

I originally published this article on the separate At the Quill website. Moved it here (after editing it a little for SEO and adding a nw illustration and header) on 24th October 2018.

5 thoughts on “A nice cup of tea in the morning”