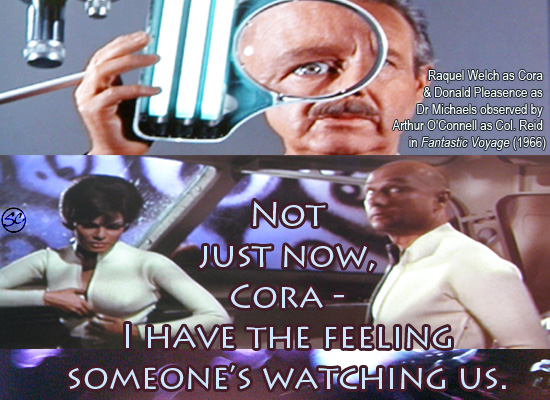 There are some great lines in Fantastic Voyage (some of them cited below), but I ended up going for a cheap joke at the expense of Raquel Welch and Donald Pleasence. I was inspired by the strip in the middle of the postcard above here, which is a still from the DVD. (What she’s actually doing is zipping her wetsuit closed preparatory to leaving the submarine to help unclog intake filters.) In my defence, the film-makers blatantly included Ms Welch in the cast only for her well-endowed chest – she has minimal acting duties.

I don’t know when I first saw Fantastic Voyage. I’d like it to have been at a matiné performance when it was released in Britain in the autumn of 1966, but I suppose that’s unlikely. (I would only have been 8 years old.) In all probability I saw it first on television sometime in the early 70s. The puzzling thing is, though, I think I remember the colours, but I don’t think we had a colour TV at the time.

Now the Oscar-winning special effects seem dated. The sea of arterial red corpuscles looks suspiciously like a back-projected close-up of a lava lamp. But lense flares (for example in the picture below) do hint at one of the effects JJ Abrams was trying to recreate in his recent ‘re-envisioning’ of Star Trek. (See here.)

A further source of memory confusion is that I almost certainly read Isaac Asimov’s novelisation of Fantastic Voyage (in which he corrected all the more gross scientific errors) before I saw the film.

Still, the scenes with the miniaturised submarine voyaging through a human body to deliver a surgical team to an otherwise inaccessible blood clot impressed me no end. It was one of the things that motivated me to achieve the high grade I did in my Biology O-level when I was 16. (Grade 2. I did better in Biology than in English Language. Which may not surprise any of my former students who have had the pleasure of studying English with me!)

Here are some of the great lines from the film I could have used but didn’t:

Arterial wall to the left!

They’ve crossed over into the jugular vein through an arterial veinous fistula!

That puts us right here which means we can head for the subarachnoid cavity.

The semilunar valve should be on our left any second now.

One other thought: In American films and TV series, 80% of the time, if one of the characters speaks in a British English accent, you know that’s the villain. Fantastic Voyage is no different. As soon as Donald Pleasence opens his mouth you know he’s the bad guy.