There’s something very special, I think, about hearing piano music in the street. Perhaps because it’s not something I hear so often, each time it happens it adds an extra little bookmark in my memory.

A morning walk along a Brussels street. The sun slants, just clearing the rooftops, illuminating the facades but leaving the paving still in shadow. The promised heat of the afternoon is yet to come and yesterday’s has dissipated in the night. It’s a little chill. There are no front yards, the front doors, up steps, a couple or three, open off the street, and the tall front room windows, above the head height of passers-by, are open to let in the fresh air. From one of these comes the sound of a piano. 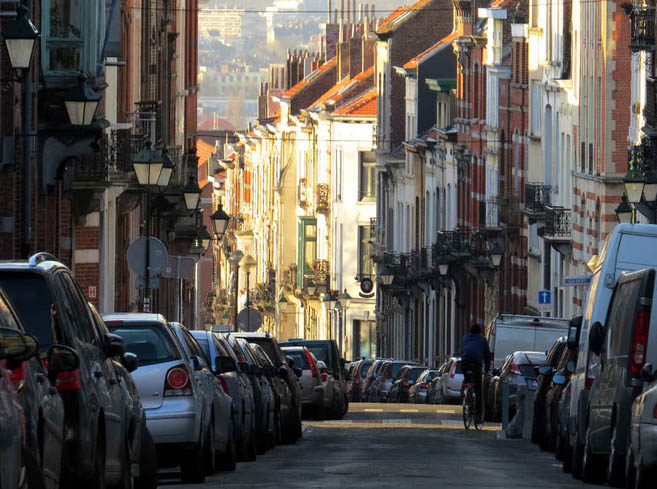 The pianist is not proficient. This is practice. Four, eight, sixteen bars tried again and again. There’s something a little hesitant about the last couple of bars. The speed drops, a key is missed, fumbled, there is a pause and the passage begins again. I walk on up the street and the piano sounds fade away behind me, but I am remembering another street, another piano.

Afternoon in the centre of Cracow. The yellow trams are rattling past one another up and down the road, taxis weaving between them and people, locals on their way from work to the shops mixed with ambling tourists in T-shirts and shorts. And once again from open windows above head height the sound of a piano. Here, a sign by the door tells me this is a music school. Someone is practising – Chopin (of course), the Minute Waltz. And I stop and join two or three others who stand below the window listening, smiling at one another, and as the piece finishes without a hitch there is a small round of applause before we all go our separate ways. 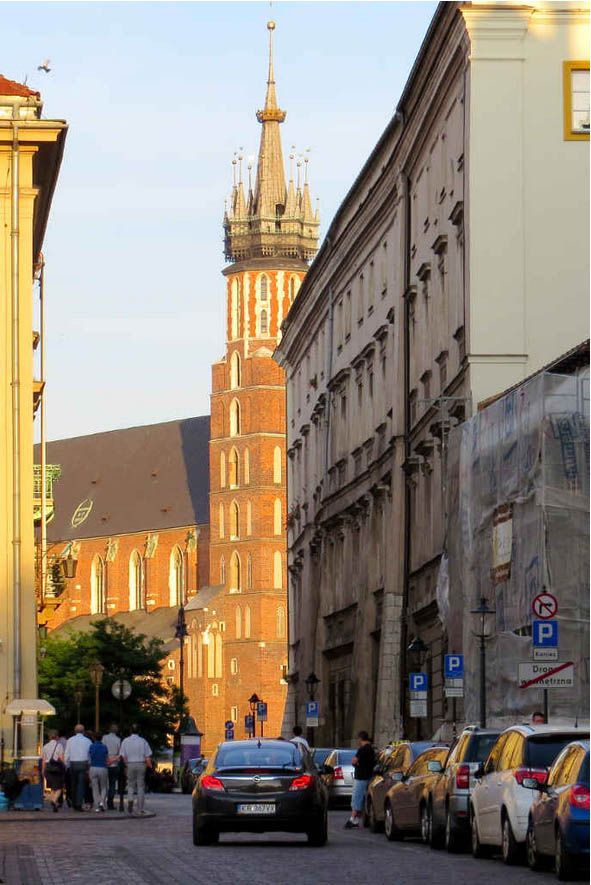 At the Eurostar stations in Paris and London the management have put out pianos. Older, upright pianos, painted in bright primary colours. Passengers waiting to board their trains or people waiting to meet friends arriving from far off sometimes sit down and plink away. When I was in London in March – my first visit to the renovated Paddington terminus – a young man was picking out Chopsticks. Diddle-um-pum-pum, diddle-um-pum-pum, diddle-um-pum-um-pum-um-pum-pum. In Paris, another young man sat and delivered a proficient jazz melody while his friends stood around.

A piano in every home

A hundred years ago there was a piano in every home. Well, perhaps not every home, but in most British middle-class homes and in many an aspiring working class home. Before radio and long before TV and before cheap records and gramophones, people made music themselves and the piano was a symbol of modernity and a product of modern industrialisation (likewise the accordion, but the squeezebox never achieved the same cultural cachet). Sheet music was cheap and the ability to play the piano was a social accomplishment. Before the guitar, the piano ruled.

Now pianos may still be built and bought by the wealthy, but the pianos of the past are out on the street. My brother-in-law’s piano – an upright that he sometimes plays (tries to play, but don’t tell him I said that) – was just such a piano. Left out on the street by a family clearing the house of a deceased relative. They were going to take it to the tip – the second-hand charity shop they approached didn’t want to know. It cost Jim the price of two men and a van to get it home.

A couple of years ago I came across another piano abandoned by the wayside. I’m not sure how long it had stood there, some of the boards had come away exposing the cast iron harp. It was still strung, but the felt of the hammers was swollen with damp and on the keys the white veneer – not ivory I hope – was coming away from the wood. Of course I tried it to hear if I could make it sing, but it was dead. I took some photographs. 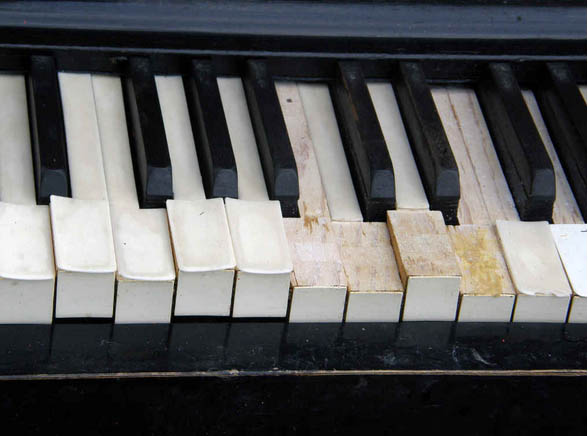 There’s another piano memory – this reaches way back, more than 40 years – 45 perhaps. A cold, dim November evening in my childhood home in Brighton. The piano teacher is coming. My sister and I, reminded, rush to our upright piano. For a week, since the last time the teacher was here, we have not looked at it, but now with just an hour to go we are squabbling over who gets to practice. Will it be my funereal slow version of “Jig” or my sister’s stuttering rendition of “Frairer Shacker”. (That’s “Frère Jacques” to you.)

My grandmother, my mother’s mother, visiting, slips in ahead of us. She claims the keyboard and plays with bravura the chorus of “Toreador” from Carmen. Most impressively, she does so without reading notes. We squeal in shock, How is this possible? How?! She never learned, she says airily, just picked it up. I play by ear.

Here we have been struggling to read the black insect squiggles and stretch our fingers to press the right keys in the right order at the right time. Now we learn you don’t have to do that. Just play by ear! We go on strike. No more piano lessons for us. We will play by ear. So, of course, we never do.

“Thank you, Mum,” my mother said to her mother. I think that was when I began to recognise irony.

2 thoughts on “Piano music in the street”