In last week’s entry I described the forthcoming British referendum on continued membership of the EU as a bit surreal. After the event things have not become less surreal, and there’s little prospect they will do so in the near future. The traditional media as well as the more informal Internet-born media is awash with the aftermath. I have neither the knowledge and fighting spirit to want to take it up myself. Nor do I have the distance and emotional detachment to turn away and spend time with something completely different.

However, I need to find something to post here now.

This is a travel blog, so let’s revisit maps. As I wrote in my review of Judith Schalansky’s Pocket Atlas of Remote Islands, ‘all maps are ideological’. This came back to me again looking at the various referendum maps that the news media produced to chronicle voting on 23rd June. Compare these two, for example. 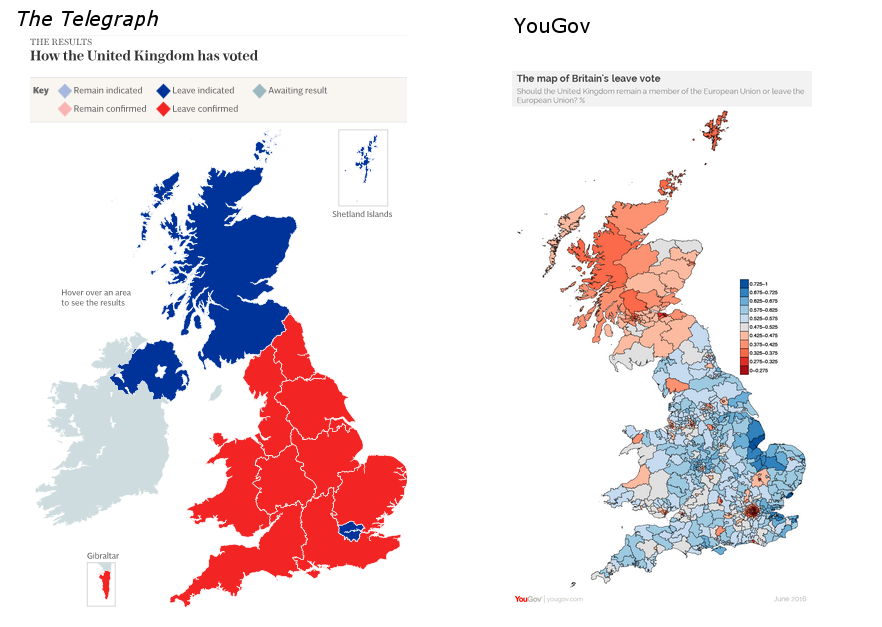 The Telegraph was, like most of the British print media, a supporter of the Leave side. This map underlines the strength of the vote for Leave. It shows the final result in the 12 regions of the UK (and in Gibraltar). Also notice that, though Scotland is a large area for Remain, nine of the 10 areas of England and Wales are solid for Leave. The only exception is little London down in the south east corner.

[A couple of days after I published this I was re-reading and noticed that The Telegraph’s map colours Gibraltar red for Leave. This is false information. In fact Gibraltar voted overwhelmingly for Remain – 96% according to this article from elsewhere on The Telegraph’s website. I was travelling and unable to edit the page, but I’m putting it right now, on Monday 4th July.]

YouGov, an international internet-based market research firm is presumably attempting a degree of impartiality. Their map has greater nuances. The shading indicates the strength of the Leave and/or the Remain vote in each of the 382 voting districts of Britain. (I’m not sure why Northern Ireland is missing from this map. I fear it may be my fault in the editing.)

In the next referendum map, the BBC (which attempts to be impartial) chooses to show the 382 voting districts, but without the nuances of shading of the YouGov map. By choosing blue and yellow, they seem to have meant to reflect the colours of the EU flag. (I guess the choice of red and blue in The Telegraph’s map is supposed to remind people of the British flag.) The BBC’s yellow and blue caught the eye. The Twitter comment reproduced here (via The Sun) was not an isolated one. 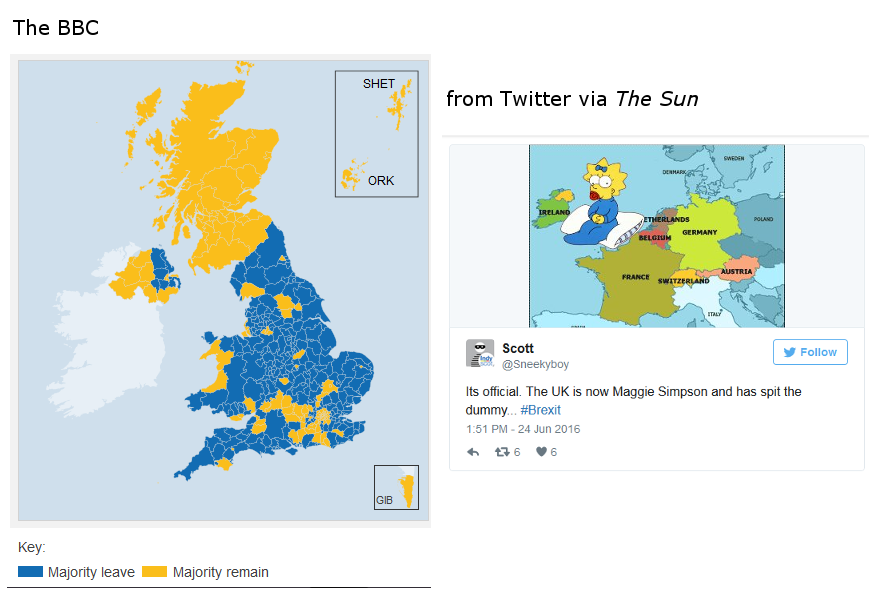 I could go on, but there’s only one more of my collection of Referendum maps that I really want to share. Below is the map from the website of the pro-Remain newspaper The Guardian. The Guardian’s map was interactive – hover a cursor over a district and you could see the results after they had come in. However, as you can see, that was not the only special feature of the map.

The Guardian’s cartographers chose to distort the geographic representation of the UK. They did this to better represents the population of each of the 382 voting districts. You can easily identify the map as the UK, but compare it with the other more conventional referendum maps above. You’ll see at once how the weight of the population of Britain in London and the South East makes a huge difference. Especially compared with The Telegraph’s map, the phenomenal Remain vote in London is seen in its true proportions. Though also the swelling population of Leavers in the Midlands. 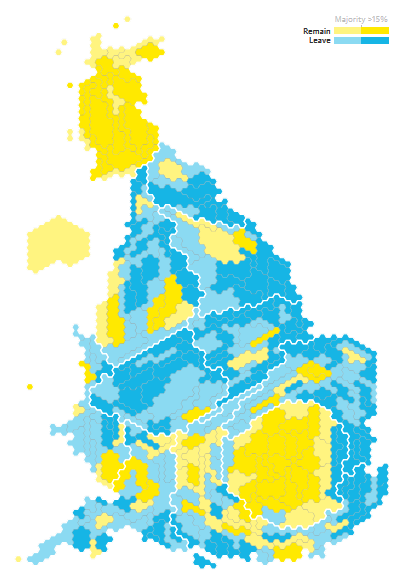 Well, I could certainly write more, but I think that’s enough from me on this subject now. Back to more conventional Stops and Stories next week. I hope.

I originally published this article on the separate Stops and Stories website. Transferred here with a little polishing for SEO and a new featured image 3 July 2017.