Along with all my usual resolutions for the New Year about being a better person and leading a healthier life. (Which get converted soon enough into trying to be a better person and trying to lead a healthier life, before being quietly forgotten.) Along with those there are a small collection which have to do with writing. One of them is: Write at least two hours every day. Another is: Publish a blog post at least once a week.

As we fumble our way into 2012, I’ve spent some time pondering the concept and history of New Year Resolutions. 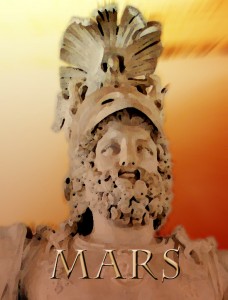 My good wife has pointed out that in Sweden people don’t make resolutions at the New Year. That would be Nyårsbeslut. Instead they make Nyårslöften – New Year Promises. Swedes are a more moral people because they make promises; English-speakers are more amoral. Of course Swedes are no more likely to keep their Promises than English-speakers are to keep their Resolutions, so we all end up in the same slush pit of failure.

We keep on doing it, though, making and breaking our New Year resolves.

There also seems an abiding interest in asking why – why we do it and why we fail; an abiding interest, but not in getting a real answer. At least, that’s my conclusion after having scoured the Internet for the History of New Year Resolutions. 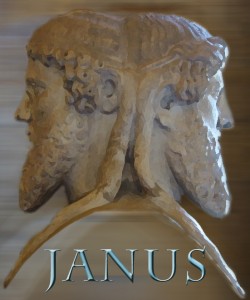 New Year Resolutions go back to Ancient Babylon, two whole millennia ago in 4000 BC, but the silly Babylonians got the date wrong, thinking it started with the first full moon (or new moon) in March. It took the Romans to fix that. (Some sites will even give you the exact date when New Year Resolutions were first made: 153 BC. Oh yes!) Anyway the Romans chose 1st January for the start of the New Year because a Roman King called Janus (who had two faces and guarded doors and bridges) gave his name to the month.

Later Julius Caesar altered the calendar and gave his own name to a month at the opposite end of the year. (I don’t know what this has to do with New Year Resolutions, but a lot of Internet sites think it’s very important. Probably because they don’t think anyone really cares about Janus but they expect people will have heard of Julius Caesar. I’m guessing.)

It’s a time to throw away old things and buy new ones. For example, in China everyone throws away all their old clothes at New Year and buys new ones. This is why the Chinese textile industry is so successful.

And at New Year in Sweden people throw all their old furniture out of the window and take the Volvo to IKEA to buy new. This is why IKEA is so successful.

The Christian Church also messed things up for a while there in the Dark Ages. They moved New Year to 25th March, because the Roman New Year celebrated the pagan God, sorry, King, er God-King Janus. But once they had properly taken over the Roman Empire the Church realised the error of their ways. Sometime in the 1600s, or in the 16th century, they switched New Year back to 1st January.

The British tax authorities, however stuck with March 25th, but then added 10 days to change it to 6th April. (Count them!)

I could go on, but perhaps I’ve made my point?

I suspect that we humans are always in need of turning over a new leaf, starting a new phase in our lives, making a new start. When the events of our lives don’t give us a clear-cut date on which to make change we look around for another date, and find the first day of the New Year – whenever that happens to fall. My guess is that it’s a practice that stretches back long, long before the Babylonians and doesn’t anyway come from a single culture. I would be unsurprised to find it among prehistoric farming communities from 10,000 years ago or among isolated hunter-gatherers in our own age.

The God of Broken Promises 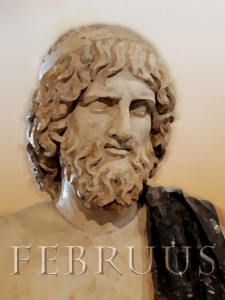 Every year we promise ourselves — or we resolve — to lose weight, eat more soundly, quit smoking, get a better job, learn something new, help others. Every year we fail. By February the failure is obvious. If Janus is the God of New Year Resolutions, Februus must be the God of Broken Promises.

He’s not, of course. He’s the god of purification. The Roman year was pretty straightforward. First they resolved to conquer another country and swore to Janus in January. They purified themselves and strengthened their resolve before Februus in February. Finally in March the month of Mars they marched off to war.

But that’s the Romans.

For us, now, the fine blades of our January resolutions are shaken and bent by the cold blasts of February. By night the dark spirits of the slush pit laugh at our pitiful promises and the memories of previous failures call us down. By day a weak sun lights up the dark corners of our pitiful ambition and shows the grime of postponement and the dust of prevarication we let accumulate.

Oh dear, oh Lor! He’s getting poetical. Time to bring this to a close I think. At least, as I stumble to the end of the third week of 2012, I’ve managed to keep that one-blog-entry-a-week resolution for one week more.