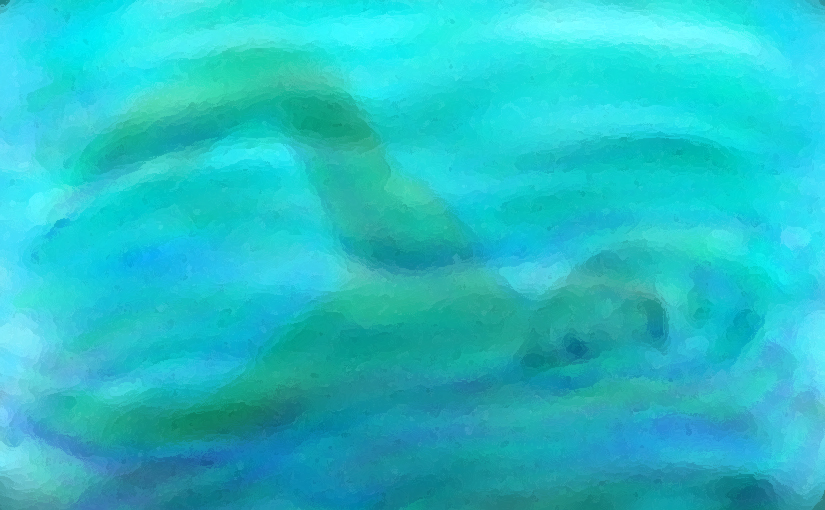 So far this year I have swum 34 km – a little over 21 miles. Not bad, especially as (what with the move and various illnesses) I didn’t get in the water until April and I’ve been swimming on just 31 days.

Swimming is wonderful exercise. The closest thing to weightlessness on earth. And you can strike superhero poses: Spiderman poised on the side of the pool-building ready to leap into the abyss; Superman flying through the air-water, arm outstretched, as you launch yourself into a crawl. And after, I feel so virtuous. Tired and virtuous. As though there was something morally good about swimming that other forms of exercise lack.

When did I learn to swim?

I grew up by the sea, but I doubt that I learned to swim in the cold waters of the English Channel off the shingle beaches of Brighton. I remember we splashed around there in the summers, my sister and I, when the family walked down to the beach for a picnic. How we dived through the green breakers and wound ribbon seaweed around our arms and lay on the pebbles and let the surf break over us. But swimming – not so much. Still, I was comfortable in the water.

I suppose I first got that comfort when I was about two years old and we lived in Qatar. Mum has stories about paddling in the warm sea and having little fish come and play around one’s legs, but I have no memory of that. When I was about six we lived in Ghana. There I remember playing in the sea and in the water at the mouth of a river. The sea was rough, with currents and an undertow. My sister was almost lost when she was taken by a current, but fortunately another bather, a strong swimmer, dived into the water and saved her.

At the river mouth there was a bathing beach and a lifeguard. He sat in a chair on a stand, high up so he could look out over the beach and the water. He kept up a constant stream of shouted directions and instructions telling people not to swim there! Stop splashing! Swim closer to the shore! I remember I thought he was an entertainment in himself, but I don’t really remember swimming.

And another memory from Ghana. Climbing down into a half-drained swimming pool and sitting in deckchairs by the water filling the deep end that was just about deep enough to play in. But still, no swimming.

Then when I was about 9 or 10 years old and we were back in England, I remember school trips to the King Alfred Swimming Baths on the Hove seafront. By that time I could swim. At least I could swim in the shallows. I didn’t dare to swim out of my depth. But I remember I used to take myself down into the deep end, hanging onto the side of the pool and with my feet on the ledge about a metre down. One day, in order to get around some other boys who were in the way and having a fight, I stepped off the ledge and swam. And suddenly realised I was swimming in the deep water. I was very surprised. So by then I could swim.

It’s odd, but I don’t remember ever being taught. I must have been, surely?

I can remember someone demonstrating a stroke – the breaststroke perhaps – fully dressed and lying on a table. Or am I just remembering a scene from a farce or a film? I remember laughter. But I can’t remember swimming in the water with a teacher walking alongside shouting instructions, shouting encouragement, as I see and hear now when I’m swimming in the pool and school classes come in.

Although I always enjoyed swimming, it was not something I kept up as an adult. It was an occasional pleasure. What was difficult about it – what is still to some extent difficult – is the business of getting to the pool and getting changed. The memories come back of those school trips to the King Alfred. The stripping naked along with all the other boys, the teasing and the bullying. The smell of chlorine and the slap of wet towels. And the hurry and anxiety. It still comes back, though now it no longer gets too much in the way.

So, as I say, I didn’t keep it up. Just now and again a dip in a pool, some strokes in a lake, splashing about in the sea. And then I waded into a depression and suddenly swimming became a way out.

Swimming out of depression

Oh, I don’t want to pretend it was just swimming, and I don’t want to pretend that it was a quick fix, but the swimming definitely helped. In the water, in the pool, pushing my way through the water, pulling myself, kicking myself from one end to the other. Counting lengths, counting strokes, holding my breath and counting. Counting so it was difficult to think of anything else. Difficult to dwell on failure, or misery, or melancholy, or the black night of the soul. Whatever you want to call it. And so, in a sense, I swam out of my depression.

And along the way I learned a better breaststroke, I improved my crawl, I rediscovered my backstroke. You wouldn’t watch me now for style, or speed, or even stamina, but nevertheless, I swim. Though I certainly see faster, more stylish swimmers every time I’m in the pool, I also see people who are just as clumsy as me – more so even. And I’m back at the pool two or three days a week, month after month.

To be sure there have been breaks. Come winter I fall ill. I get out of the habit. I miss a week, and the week becomes a month, and the month becomes a season, and any excuse is good enough. But for 17 years now I’ve always managed to get myself back into the swim of it. I don’t think I’ve missed swimming for a continuous stretch of more than about six months in all that time.

And so, here in Brussels, in Uccle, at the Piscine de Longchamp. Once I got over the initial hurdle of learning what the pool required (Lycra swimming trunks and a swimming cap). How much it cost (€4 for a visitor but €3.30 for a resident with an ID card). What I needed to take with me (a €2 coin to use in the locker). And once I got used to swimming a 33 m length, and figured out when it was best to go to the pool to avoid the school kids. Once I’d dealt with all that, it was easy enough to get back in the water and swim.

Now, here at the end of September, I’m wondering how many more swimming days I’ll manage to get in before the inevitable winter flu breaks my rhythm and sneezes me out of the pool to shiver and drip and feel generally sorry for myself until the spring comes around and I convince myself to get back in the water. How many more swimming days? Fingers crossed, quite a few.

If you liked that you might also like The pleasures of a morning swim, Ten letters for swimmers or Ten things in a public swimmingpool.

The illustration was made on my Samsung Galaxy tablet using an app called Artflow. Tidied up afterwards and subtly improved in Gimp on my main computer.

The Soundcloud audio recording includes ambient sounds I recorded at the Longchamp Swimmingpool last week as well as a few minutes of sounds from the repository at Freesound. The intial and concluding splash comes from Kayyy, the sound of waves breaking on a beach comes from jakobthiesen and the open air swimmingpool ambience comes from Oneirophile. My thanks to all three.

6 thoughts on “Swimming – now and then and in between”