Tangled up in words – a writing diary entry and a brief account of blogging elsewhere – and a visit to Borås and the sculpture I call a tangled eye. 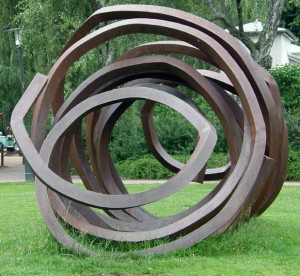 I must accept that keeping an account of hours spent doing things other than writing is not going to work. I have been able to keep up my notes on words written this week (to the tune of 751 on average each day, slightly down on last week), but I’ve completely lost track of the time I’ve spent on other things. It’s probably just as well.

Although I aspire to time-consciousness, and though I often work well to a deadline, it really goes against my nature.

There will be time –
to murder and create
and time for all the days
and works of hands that lift
and drop a question on your plate.

One of the ideas I’ve been turning over in my mind has been a short animation illustrating that quote. (Well, actually, the other line: Time to prepare a face to meet the faces that we meet. I see it as a stop-motion video of me creating a black-dog-blue face mask.)

Last week, apart from my previous At the Quill piece, I wrote two blog entries. One for each of the Blogger and Ipernity sites.

On Tuesday I spent the day in Borås, viewing (and re-viewing) the statues in the town, wandering around and taking pictures. The blog entry I called “Pinocchio comes to Borås”. The visit was a bit frustrating and the blog reflects that. I wrote it to raise a laugh and I certainly heard my wife giggling at one or two points after I’d twisted her arm and made her read it. My translator friend in Sundsvall, Lena J, also commented positively. I can imagine though, that I might offend some people who feel positive towards Borås. It was with a degree of trepidation that I published it and sent off a link to most of my contacts on Facebook. (Most former students of mine from Borås).

I was also a bit uncertain about the sort of reception my Ipernity blog might receive. I called it “What is Child Pornography?” I don’t think I need to have been too bothered, not many people seem to have noticed it or wanted to comment on it. So far the only comment has been a link to another discussion of pornography relating to children in respect of the film of The Tin Drum. (The link connects to the relevant section of the Wikipedia entry for the film.) I’m still thinking about how to respond to that. [In the end, I didn’t.]

Apart from my private diary and some e-mails, that was the sum total of my writing last week. Not so good, not really. On the other hand, I did manage to write over 5000 words, so I suppose it wasn’t so bad either.

I read in the paper this morning about an elderly lady in Australia who has just died at the age of 106. It seems she had started writing a blog of her own a year and a half ago. Mostly accounts of her life, if the paper is to be believed. She had managed to publish 74 entries before the end. Not at all bad. (Better than me!)

Apart from writing, and visiting Borås, the last week involved a deal of photographing and some Photoshopping. (The pictures I published to go with the two blogs and some others I am working on.) I have also been teaching myself the basics of Adobe Illustrator, exploring Creative Commons for music and sound recordings and trying to put together a short slideshow/film of photos and video snips I made when I visited Prora in the autumn with my history teacher colleagues from school. I have an idea for a sound track. It involves mixing the sound of waves on the shore with a track of electronic music (CC) from a German group.

To do that I need to be able to understand how to make a mixing board work. I’ve been struggling with something that came bundled with my external soundcard. I managed to get something half right, then discovered it doesn’t seem possible to save the result in any simple music format. (Not MP3, not WAV). I suppose I’m missing something, but it’s frustrating.

So, I’ve been creative and I’ve been learning things, but I don’t have a record of the amount of time I’ve spent. It’s not that the hours have been wasted (I hope), but for my own self-confidence it would be nice to be able to look back and say, yes, not only did I write 5000 words last week, but I also spent 20 hours working with my photography and another 10 learning how to use software to make things for my home page.

The home page is alive in my head, but it hasn’t come much further than that yet. I should do something about it this week (not least because once it’s up even if only “under construction” then I can post these blogs there).

[And, as you see, that’s something I managed to do in the end as well.]