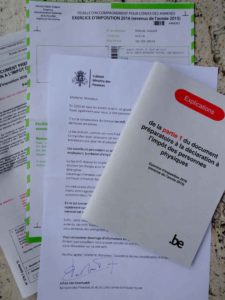 One of the things which has made my life more involved recently has been the Belgian tax declaration forms that we got in the post a couple of weeks ago. The forms included my wife, but were addressed to me as the head of the household. (Belgium has a way to come yet on the road to equality.) Mrs SC, whose job is the reason we’re in Brussels, smiled sweetly and handed the forms back to me. “You can deal with this,” she said. “It’s addressed to you.”

Now, we’ve already paid our taxes in Sweden where we are still registered for tax purposes. We explained this to various officials on various occasions last year while we were applying for local identity cards. Obviously, though, we hadn’t explained it to the right people. Now I sit at the dining table with a series of forms and a thick (110 page) explanatory pamphlet in dense French. There’s also a covering letter signed by Johan Van Overtveldt, Ministre des Finances et la Lutte contre la Fraude fiscale. His title is about the only thing my French stretches to translate – Minister of Finance and the Fight against Tax Fraud.

Well, I can also make out that the deadline for returning the forms is 12th June and that there will be dire consequences for being late and fraudulent, but not much else. The forms and pamphlet are couched in what I take to be French bureaucratese. Not quite the French they taught in English schools 45 years ago (most of which I can’t remember anyway).

Obviously we are not supposed to complete these forms. Obviously! But how to find someone to explain this to? 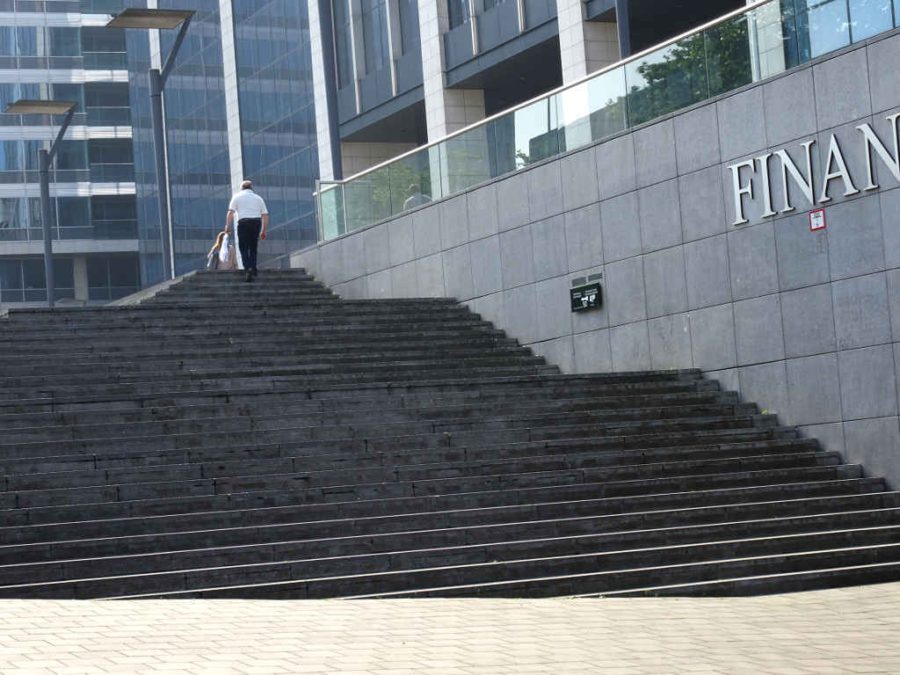 It took a deal of trial and error.

In the end, I went online to the home page of the Belgian Ministry of Finance and – bingo – there was a page in English. Of course the information was superficial and only directed at people who were actually making their declarations in Belgium, but there was a telephone number for further information.

Unfortunately – and typically in my experience – the number only led to a machine recording of three alternatives: Français, Nederlands, Deutsche – the three official languages of Belgium. I chose Français. In French I have at least a chance to understand when I’m offered the option of speaking to a human being. I got it right… on only the third attempt.

The young man who answered said he didn’t understand much English but we coped. His advice was to come to the tax office in the centre of town. I had to bring the forms plus my own and Mrs SC’s identity cards.

The Ministry of Plenty 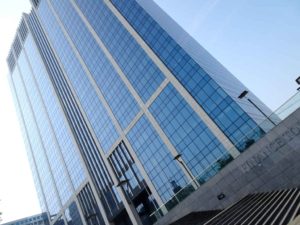 The tax office turned out to be the offices of the mirror-windowed Ministry of Finance tower at Boulevard du Jardin Botanique 50.

There were two reception desks, one to the left and one to the right. Which to choose? There were no signs I could see that explained so I chose the queue to the left. I chose wrong. When I got to a receptionist, she looked tiredly at me. This had happened before.

As I stood in the queue at the other desk, I tried to work out what in all the sineage at the door indicated the correct queue. I still couldn’t see it.

At the end of the line another receptionist, also tired and quite irritated, told me to go back outside, down into the Metro and turn left. There was an “of course” hanging in her voice. Once again, no signs I could see that ought to have given me a clue.

Down in the Metro

Down in the Metro (Botanique) I found a subway that ran for several hundred metres right across beneath the main road. Along the entire length of the subway stretched a queue of people waiting patiently to get into the Finance Tower. Hundreds of people. 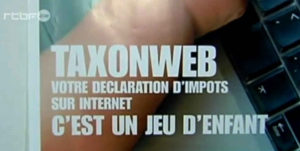 Behind the reception desk I’d just come from was an electronic screen I’d had the time to study. Two alternating adverts encouraged people to make their declaration online. The first showed a child at a keyboard with the slogan C’est un jeu d’enfant. (It’s child’s play.) The other showed two smiling young people – a man and a woman – and the slogan (in English – why?) that said: It’s so easy!

At the head of the long queue, there were a couple of quite pleasant but distinctly burly young men handing out numbered white tickets and overseeing the people allowed in. I spoke to one of them and after a bit of explaining, he told me to go right the way down the corridor till I found one of his colleague who was giving out pink tickets. I should explain my situation, get a pink ticket and bring it back. It was a long walk and the colleague was less than keen to help, but I talked at him in English and eventually he gave me a ticket to go away.

The pink ticket let me jump the queue and ride the escalator up to a huge reception hall in the Finance Tower. Here, hundreds of lucky ticket holders were sitting around clutching their white tickets, waiting for their queue number to come up. The pink tickets were shunted into another queue that eventually brought me to a clerk at a desk.

I explained my situation and he confessed that he’d only been working there for a week and didn’t really know how to help me. But his colleague – he indicated with his hand – she had been here for many years and she would know. So I stood to one side and waited for the colleague, and when she had finished with one pink ticket I quickly dodged in ahead of the next and explained my situation. Had I come to the right place?

“Yes,” she said. “You have, but unfortunately there’s nobody here who can help you today. You must come back on Wednesday. We open at 8 a.m.”

That was on Friday 27th May. On Wednesday 1st June I arrived in the subway at about 7.50 in the morning. The queue already stretched almost the whole length of the corridor. I joined the end of the queue and after a bit I was not at the end any more. I hadn’t moved forward; more and more people had arrived to join in behind me. 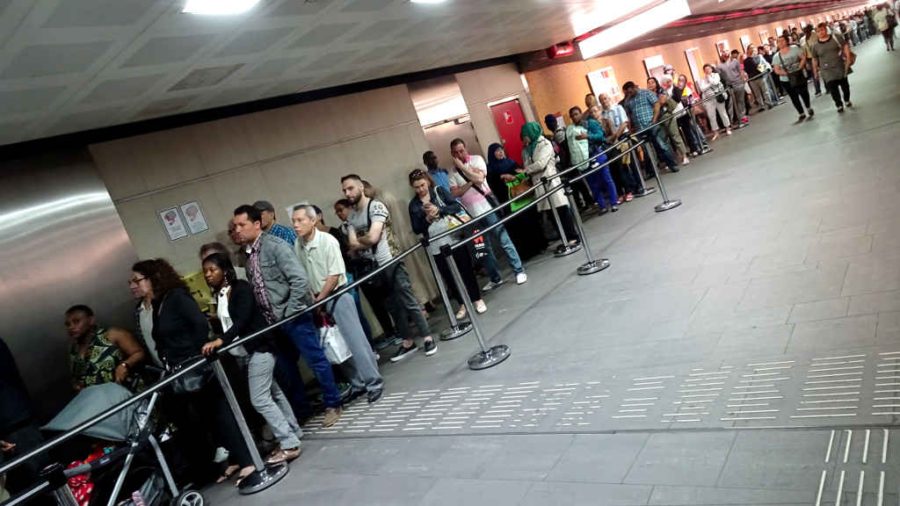 A little after 8 a.m. the queue started to move, which was hopeful. Then it stopped and I realised it wasn’t that people were being let in, that first movement. It was just the queue getting serious and drawing together because the Finance Ministry was starting work.

We stood still, almost still, for about half an hour. Then, very slowly, the queue start moving for real. After I’d been standing for a little over an hour I got within sight of the door. At that point some of the burly men came out with their jump-the-queue tickets. I caught the eye of one of these and went through the same procedure as before, arguing my case. He said something that sounded like the people I wanted to see wouldn’t be working today. That’s when I raised my voice and started repeating myself. Eventually he gave me a ticket.

Through the revolving door, up the escalator and once more into this cavernous waiting room. The special queue for the pink tickets was much shorter this time, but the young lady whose desk I reached was not keen to help. She wanted me to go back down to the main queue and get a proper white ticket and talk to someone else. So I carried on talking in English, my voice growing louder. 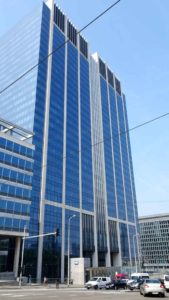 Does it ever work, talking loudly at people in English? On the basis of this experience I have to say, Yes.

She took me through to another queue in another corridor and left me to talk to a calm, older man. I explained again. In the middle of this, he moved his hand, palm down, and I realised I was still shouting. I dropped my voice and he nodded approvingly, looked at my ID card, tapped away at his computer keyboard a little and said, “Now, everything is all right.”

I was confused and asked if there was a receipt. “No receipt.” So I thanked him and went back out into the main reception hall where I had to sit down. My knees were weak.

I took out my phone and sent a text message to Mrs SC that all was well. But then I had the sudden horrible feeling that perhaps he’d only fixed it for me. After all he hadn’t asked to see her ID card. So I went back to his desk and caught his eye and when he finished with the person he was talking to I asked if he had also included my wife. “Of course. She is your wife. You are on the same form. Do not worry. Everything is all right.”

I thanked him once again and finally let myself leave the building.

“Everything is all right” – and it was for 12 months. Then the exact same damn thing happened again in 2017.

At least this time around I was prepared. I knew where to go, how to queue and what to expect. And it only took one morning to sort out. Two different meetings with two different bureaucrats this time though. And there was a point between the meetings when I had to call Mrs SC. She contacted the Swedish tax authorities to ask for an official statement that we had in fact paid taxes in Sweden. In the end the second Belgian bureaucrat didn’t need any statement and didn’t seem to understand why I was going on about them. (Just as well as the Swedish papers arrived – by post – a week after the Belgian tax declaration deadline.)

But what will happen next year? Watch this space…

I don’t like the English abroad who wander around talking loudly at the natives. Apparently they’re convinced incomprehension of English is really a form of deafness. I really don’t like that… but it’s humbling – even a bit humiliating – to realise, if I’m stressed, that I do it too. On the other hand, it worked. I’m not sure what conclusion to draw from that.

Of course I couldn’t find one of those “It’s so easy” ads to photograph for this, but eventually I found the “It’s child’s play” ad in a Belgian TV (RTBF) news video clip. So that’s where that comes from.

I originally published this article on the separate Stops and Stories website. Transferred here with the addition of the Envoi, a little polishing for SEO and a new featured image 29 June 2017.