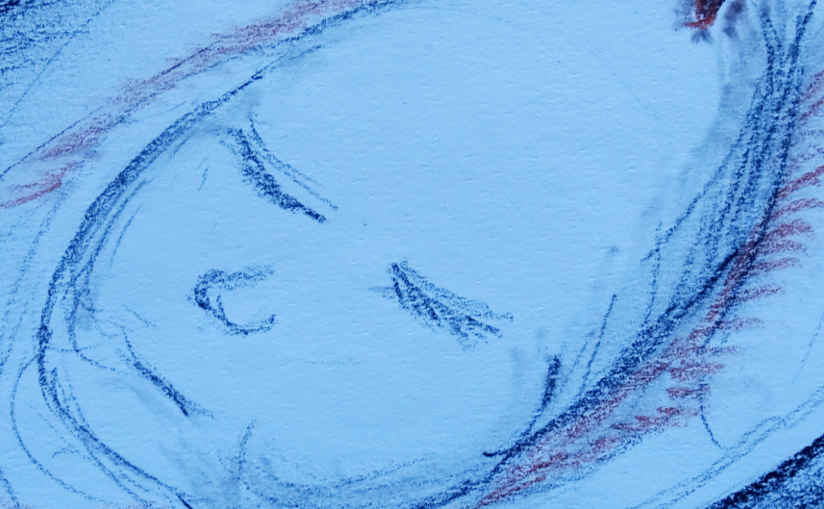 This week, wounds and scar tissue. Not one of my usual efforts, though it is a kind of a Stop and a kind of a Story. I want to give some explanation of why I’ve not been enthusiastically blogging the last few weeks. It all starts with my birth…

I was a forceps baby. I was a big baby and my mother is a small woman. To be sure, back in 1958, I was not nearly as big as I have become and my mother was larger then than she is now. Nevertheless I was a difficult child to birth. Back then Caesarean section was not as common as it is today. It was a more risky procedure used only for very serious complications. Instead, forceps were frequently used to help tardy babies come out. 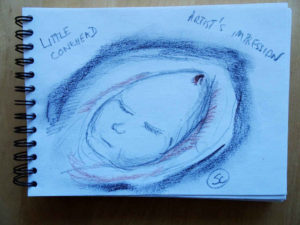 A pair of forceps is like a pair of tongs. It has cupped ends that the doctor or midwife inserts into the mother’s vagina, then opens inside her to cup the head of the child, get a grip and tug. The mother pushes, the forceps wielder pulls and with any luck the baby comes out. Partly as a result of the procedure, forceps babies often have noticeably conical heads.* I did. I also had a cut on the crown of my head – or at least there was dried blood there when my mother saw me after I’d been cleaned up.

Her theory is that the doctor in the heat of the moment cut my head with the forceps. We never found out the truth of it – and I don’t know whether mum ever asked. This was in the long ago, and in England too; there was no question of enquiries over such a small thing. Besides mum was just happy to have me out.

I grew up with a scar on the crown of my head, a little bald irregularity like an uneven button. Unlike all the other scars I picked up over time – on the ridge of an eyebrow when I fell on stone steps, on the wrist of my left hand when as a student I put it through a window, on my right knee when I came off a bike on a gravel road in Sweden – the scar on my head did not sink into the skin and fade over time. It stood a little proud of my scalp, but I never thought much about it unless I caught it with the teeth of a comb.

I’ve recently learned that head scars like this have a medical name. They are keloid scars, and they are caused by an excess of collagen. According to the website of the British National Health Service (long may it exist!) keloid scars are not really understood. “Experts don’t fully understand why keloid scarring happens.” The site goes onto say keloid scars “are not contagious or cancerous.” Not contagious, obviously, but not cancerous? I’m not so sure.

It all started last summer when Mrs SC and I were visiting Lisbon. I was crouched in the wardrobe of our hotel room trying to get at the little wall safe hidden in there. I stood up rather too quickly and whacked my head on the clothes rail in the wardrobe. Bull’s-eye on the scar. My first reaction was to stumble around the room holding my head and cursing, but that passed quickly enough.

We were in a hurry so I carried on getting ready to go out, but was puzzled suddenly to see my fingers were leaving red smears on everything I touched. Also there was a tickling sensation above my eyebrows. Mrs SC looked at me in horror. “There’s blood all over your forehead!”

Head wounds are notoriously bloody but often not serious. I wasn’t particularly worried. But the blood kept flowing through all our efforts to staunch it with handfuls of tissue paper and cold water. Everything had to stop while we waited for the blood to coagulate. Eventually it did. I cleaned up and all was well. The day was not ruined.

But the scar didn’t really get better. Mrs SC started giving me morning colour reports – how red it was looking when it always used to be off-white. And some mornings I woke to find bloodstains on my pillowcase.

It’s unusual – was unusual – that I ever looked at my scar myself. (How often do you look at the crown of your own head?) It involves too many mirrors and awkward poses in the bathroom. My increasingly poor eyesight doesn’t make it easier. But while I was bent over and trying to get a look at the scar after the latest bleeding incident, it struck me that with modern technology I ought to be able to take a photograph. 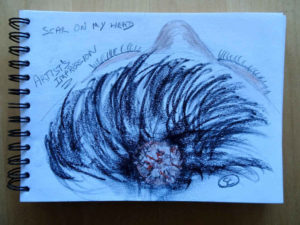 Easier said than done. And once I finally managed, I wished I hadn’t. The photo was crisp and clear. Horribly so. The scar looked like a huge crater in the top of my head. There were flecks of dried blood and irregular lumps and pits of sore skin and what looked like a couple of pus-filled spots. It was stomach turning and I have no wish to share it with you. (See the artist’s impression instead.)

Fast forward to October and back home in Sweden. I was admitted to hospital for an operation to repair a hernia that was making walking increasingly difficult for me. It was a keyhole op that left me with three holes in my abdomen and feeling like I’d been kicked in the stomach by a horse. As the surgeon pointed out, he’d actually stabbed me three times in the stomach. There was no simile required. The pain after the operation was greater than the pain I’d had before and it dragged on for weeks. And dragged me down. For a longer time it didn’t seem worth the exchange. But there I was, holed below the waistline and stitched up. I had to visit my local doctor here in Brussels after a couple of weeks to get the stitches taken out.

Just that morning, after I showered, the scar on my head started bleeding again. So after the doctor had removed the stitches in my belly, I asked him to look at my scalp. There was a sharp intake of breath. Then he wrote me a referral to “the best dermatologist. I could send you somewhere else, but they would just send you on to him.” 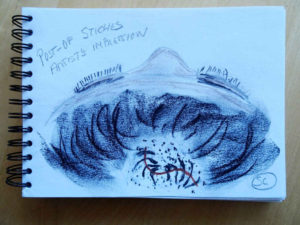 Mid-November I had a consultation with the dermatologist, and he booked me in for a biopsy. Now, in my ignorance I assumed the biopsy would involve someone taking a little bit of my scar and checking it before deciding what to do next. Wrong. Under local anaesthetic the diminutive lady surgeon enthusiastically cut off the entire scar and some clear skin around it. Then she stitched up my scalp. I felt the needle scraping on the bone of my skull as she dragged the skin up left and right, front and back, to close the hole she’d made.

It wasn’t until the anaesthetic wore off that I really hurt. And then for a couple of days I was walking around with the constant sensation that I had just banged my head hard on a sharp corner. Painkillers didn’t really help. Nor did the fact that the wound was protected by a pad of sterile gauze held in place by an elastic bandage wrapped around my head under my jaw. 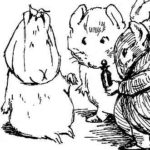 Adding insult to injury this made me look like a particularly disgruntled guinea pig. In fact am sure there is a Beatrix Potter illustration somewhere…

So that’s the story of my wounds and scar tissue. In two weeks time I’ll go in to see the consultant again and learn what the biopsy tells him about the scar. Was it really a tumour or was all the bleeding simply an ongoing protest at the blow I gave it in Lisbon? And if it was a tumour, was it benign or malignant? And if malignant, will it need another operation? 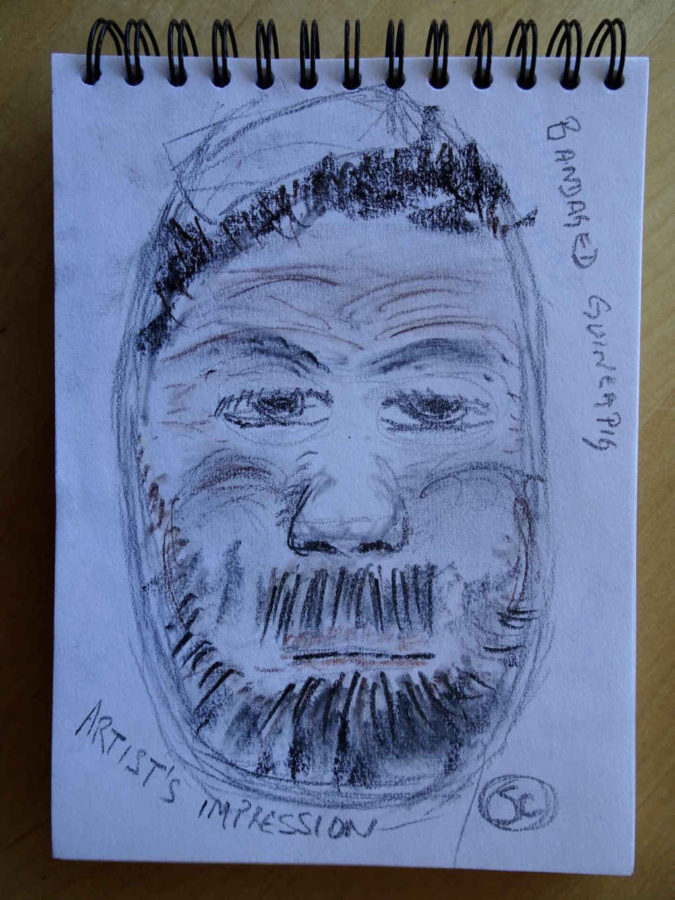 For anyone who wants to know – the diagnosis was basal cell carcenoma. If you are going to get a cancer, this is one of the better ones. Very unlikely to metastasise and easy to treat – cutting it out is usually enough. An Australian colleague of my wife, who has presumably had several removed over the years, wondered why I was kicking up such a fuss. He has a point, I suppose.

^* Most babies who have spent a longer time being born come out with conical heads because of the pressure in the birth canal, forceps can make this more pronounced.

The Beatrix Potter drawing comes from her late (1929) book The Fairy Caravan. Download a copy from The Faded Page website. All the other illustrations are my own.

I originally published this article on the separate Stops and Stories website. Transferred here 7 Jan 2017.

6 thoughts on “Wounds and scar tissue”