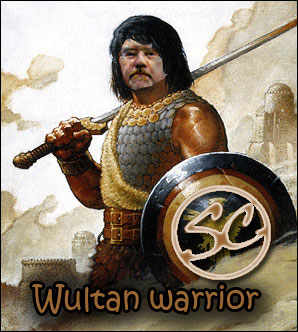 On 16th April, the Artwiculate Word of the Day was wizen. This is a word of Old English origins, so it seemed appropriate to offer some fragments of cod Anglo-Saxon alliterative verse.

As Wultan watched
The wizen wizard wove his words,
Warp and weft, wending, winding.
His wizen wisdom’s yet worth wealth,
Thought Wultan.

Wultan, Wotan’s worshipper was
Yet willing to welcome wise words.
Commands the White God’s man
to speak.
“Vewily, I say, Chwist is wizen!”

The westron woman worked her wiles,
Wrapped Wultan who waxed wondrously,
But when the witch had had her way,
How wizen was Wultan!

Then Wultan to Witenagemot,
Wise council seeking, but wizen
Were the Witan, stricken weird.

Artwiculate is a game played on Twitter. Visit http://artwiculate.com for more information. And, for addicts, don’t forget Salon ArtWois at http://www.salonartwois.com/ )

The above illustration is a perversion of a painting, by Mark Schultz, of Conan the Barbarian, borrowed from Wikipedia.

2 thoughts on “Wultan warrior – some fragments of Anglo-Saxon verse”