There is a scene in The Player of Games, a science fiction novel by Iain M Banks, in which the protagonist Jernau Gergeh, while swimming backstroke, is dictating into a microphone that is tracking his movements up and down a swimming pool. I have to confess that even I found that unlikely, but what an exciting idea!

My ideal has me leaning back in my armchair, eyes closed, feet up and arms relaxed, speaking my novel into the air. Somewhere across the room a computer records my voice and puts my words into accurate text. Alternatively I see myself walking in the countryside, pausing by inspiring scenery and dictating descriptions. Far away a computer in my home turns my words into immortal poetry. 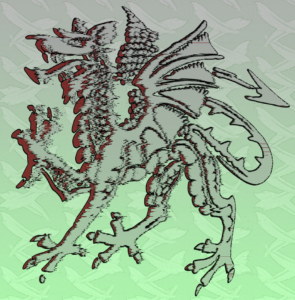 Every few years over the last 15 or so I have invested in the latest example of voice recognition software in the hope that now my dream will come true. It hasn’t – yet – but hope springs eternal in the human breast.

I can’t remember who made the first software I tried out. I know I had a stint with IBM’s ViaVoice and now I’m working with Dragon NaturallySpeaking from Nuance.

I’ve been using Dragon fairly regularly for the last couple of years, and I wrote a blog entry on the subject a year ago which began in the same way as this, but I’ve been meaning to update it since the upgraded version of the software came out. I’m now using version DNS 12.5 with a Bluetooth microphone, and it is possible for me at last to get up from my chair walk across the room and dictate while on the move. (And you can’t see me, but that’s exactly what I’m doing at the moment.)

I use Dragon principally for translating. I look at the Swedish text I have to work with, I reformulate it in my mind and then I dictate the translated version into a Word document. This works rather well.

I’ve also used the programme to transcribed texts. This is a bit more complicated. I have to have the sound input through an earphone in one ear while the microphone hangs off the other. But if I’ve once got it set up right it’s quite efficient.

And of course I’m using the Dragon software also to write blog entries. Not all by any means, but some.

What I still can’t do is use it to dictate and create fiction.

The instructions I have tell me that I should speak in full sentences and as naturally as possible so that Dragon can identify correctly what I’m trying to say. But I can’t dictate like that when I’m writing a story. I dictate as I think. I say something, change my mind, repeat myself. Always hesitating, pausing for thought, I go back and change words, phrases, punctuation. And Dragon doesn’t usually appreciate me doing this.

All the errors the software generates seem to be multiplied when I speak in my authorial style. Pronouns are misrepresented and punctuation marks are sometimes written out in full. (Often incorrectly, so “full stop” is printed as “Well, stop!”) Hesitation noises get transcribed as random conjunctions or prepositions. Sometimes words I’m dictating are interpreted as commands. If I’m not looking at the screen when that happens – on one of my peregrinations around the room – I come back to discover that the computer is merrily searching for something bizarre on the Internet. (And just there, when I said “commands”, the software cheerfully opened the “My Commands Editor” input box!)

On the plus side, a very positive feature of using dictation software – once you’ve got the damn thing to accept that you want to dictate in British rather than American English – is that it spells everything correctly. Of course this has its down side too. It means you don’t always spot the homophones Dragon has chosen instead of the word you were actually thinking of. (To/two/too seems to be a particular problem, but even “our” for “are” or “year” for “ear” – to mention two – damn it – that have happened while I’ve been working on this.) And it still gets some grammar wrong (writing for example “use” for “used” when I can’t see why it should make the mistake, given that the word is used in context). But generally speaking I’m quite satisfied with it.

To be sure, I’m still a long way from my ideal. But I’ve come round to understanding that I can’t really blame Dragon for that. No matter how many authors I read of who could – who can – dictate reams of text without hesitation (Winston Churchill, Dan Brown) I’ve come to recognise that dictating creatively just isn’t my forte.

I originally published this article on the separate At the Quill website. Revised for spelling and SEO fine-tuning. Featured image added. Transferred here 25 March 2017.