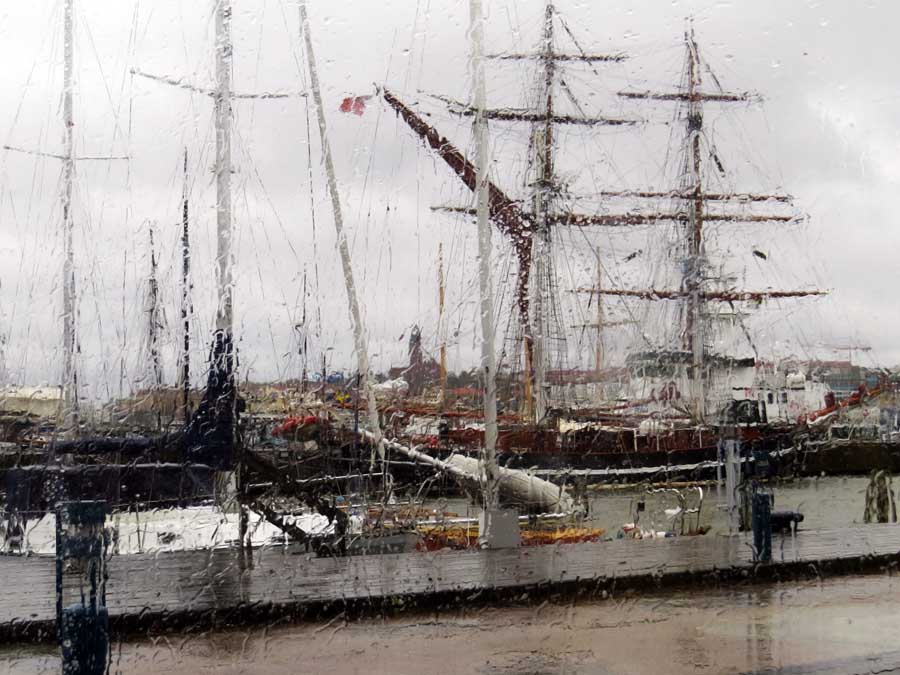 I took this impression of Masthugget three days ago on Sunday 25th. That’s Masthugget’s church tower in the distance, on the top of the hill on the other side of the river. I took the photo through the glass of the shelter at the Eriksberg ferry stop, where I was trying to keep out of the weather. Masthugget is the place where, once upon a time, masts were made for the ships that sailed from the port of Gothenburg. It’s appropriate that between the rain streaked glass and the distant, distorted church tower is a small forest of masts. The masts of sailing vessels anchored at Eriksberg.

The photo is a pretty good representation of the weather we’ve been enjoying for a week or so. Not that it’s been raining all the time. Nor that the wind has been blowing relentlessly. But quite a lot in respect of both. In between times there are lulls, and sometimes, even, the clouds will part and the sun will peek out. Though less often as the days go by. The winter nights are closing in.

We changed our clocks on Sunday, along with a mass of other people in countries across Europe and elsewhere. Autumn fall back, as I was sometimes taught. We are back to “regular” time now. The question is, what will happen in the spring? The EU has taken its hand and edict from the reckoning of time. From next year it will be up to each country to decide for itself whether to advance the clocks in the spring for “Summer Time”, or to leave them be. Probably someone in Sweden has already decided what we’ll be doing. Swedes are like that. But as I don’t know about it, I shall hope to be pleasantly surprised when the time comes around.

On Sunday Mrs SC and I were on our way to the Röda Sten art gallery to see a video installation called Sunrise, Simulation. Actually I’m not sure whether that’s what it’s called, or whether it’s really Hometown. Two young women, one in Kiev the other in Beirut, recite poetry in their respective languages as they (and the camera) walk around their home towns. Visually, it was rather good, and the two protagonists were both striking and compelling. I was a bit disappointed, though, to discover the two were not the authors of the poetry or the film. They’re actors employed by the Dutch collective Metahaven, the actual creative force behind the film.

(But why? All art is pretension to some degree, and all creatives are pretentious. Me too.)

We were out early because we needed to be back in good time, but we misjudged the bus connections. So there we were, hunkering in the shelter at Eriksberg, waiting for the ferry. Watching the wind chop the water, peering through rain streaked glass at this impression of Masthugget.

Crossing the river, when the ferry turned up, went well enough. There was a moment, though, as the ferry put in at Klippan, when I thought the wind was going to push us passed the quay and into the shallows. But all was well, and we even arrived earlier than planned. Before the gallery opened in fact.

To shelter from the rain and escape the wind, we stepped into the Konst Café. (The Art Café.) Coffee and (in my case) apple cake heated in the microwave. I was cold. Looking around the walls of the café we saw this picture. Painted by Rudolf Flink in 1933. It shows a tenement building below Ramberget that is still there today. I’ve assumed the building was left after surrounding structures had been demolished. From the painting, it looks like it’s always been isolated there where it stands.

Here’s a photo of the building as it looks today. Taken this afternoon, when the sun came out.

The painting is called Hisingen, which is where we were hunkering. The island north of the river. It looks like it was painted late in the winter, with snow and ice melting. I can imagine there has been a rainfall recently. Water on ice. That’s something we have to look forward to ourselves. There have been snowfalls in the north of Sweden already, but not a snowflake here. Not yet. But…