October – and now most of November – has been and gone and we roll on towards the end of another year. I have managed to keep up my weekly posts to Stops and Stories and my photo of the week from GBG365 posted on My Gothenburg Days’ Facebook page, but other projects have been a bit on hold.

In October, while Mrs SC was gallivanting around Africa (it was work-related, but I still envy her a bit), I took the opportunity to visit England. I spent a couple of days on a nostalgic return visit to the south coast – visiting the daughter of an old family friend in Worthing and retracing my 17-year-old self around the centre of Brighton. And Hove, actually. After which I headed up to Northampton where I continued interviewing my mother about her childhood.

This time around we were looking in more detail at names of people she has mentioned in earlier interviews. I’m hoping that at least some of the people her parents associated with in Manchester and the East End of London in the 1920s and 30s may have left a mark in the photo databases collected by the National Portrait Gallery. Some of them certainly went on to make names for themselves in politics, the arts and local business.

My hope is to be able to find photos of some of these people taken when they were about the age she would have known them. Perhaps the pictures will spark more memories. I have to admit, though, that my first attempt – with a picture of Elsa Lanchester – didn’t go down too well.

Elsa Lanchester was one of my grandmother’s friends and Mum is named after her. Mum has always hated being called Elsa. Now she tells me she remembers being taken backstage to Elsa’s dressing room when she was performing as Peter Pan. “I never liked her. She was affected and not a very warm person.” However, Mum remembers Elsa’s brother Waldo being “a very nice man” and enjoyed being taken to his marionette theatre.

Three portraits of Elsa Lanchester. In the middle as the Bride in The Bride of Frankenstein.

Then, after I got back from England and Mrs SC got back from Johannesberg, we were off again. This time a short holiday together in Florence to celebrate her birthday. It was our first visit, we were lucky with the weather (or maybe it’s always that mild there at the beginning of November). We walked long distances, explored the streets and visited mostly churches to see early Renaissance frescoes.

It was while we were in Italy that news reached me of the death of my oldest friend. Adrian was a contemporary at school and we first met when I was about 10½ and he was 11. I’d only recently met up with him in Brighton. We went out for a meal and a drink together and there was no hint of there being anything wrong. But there it is, a heart attack caused by a blood clot.

First your grandparents go, then you lose a parent, but when an exact contemporary passes, it gets you thinking (selfishly perhaps, but inevitably) about your own life, age, health… chances.

Then came the events in Paris on Friday 13th, and the sequels. I’m writing this on Saturday 21st in a Brussels in lockdown. It’s been a dark few days – but, well, it is November. 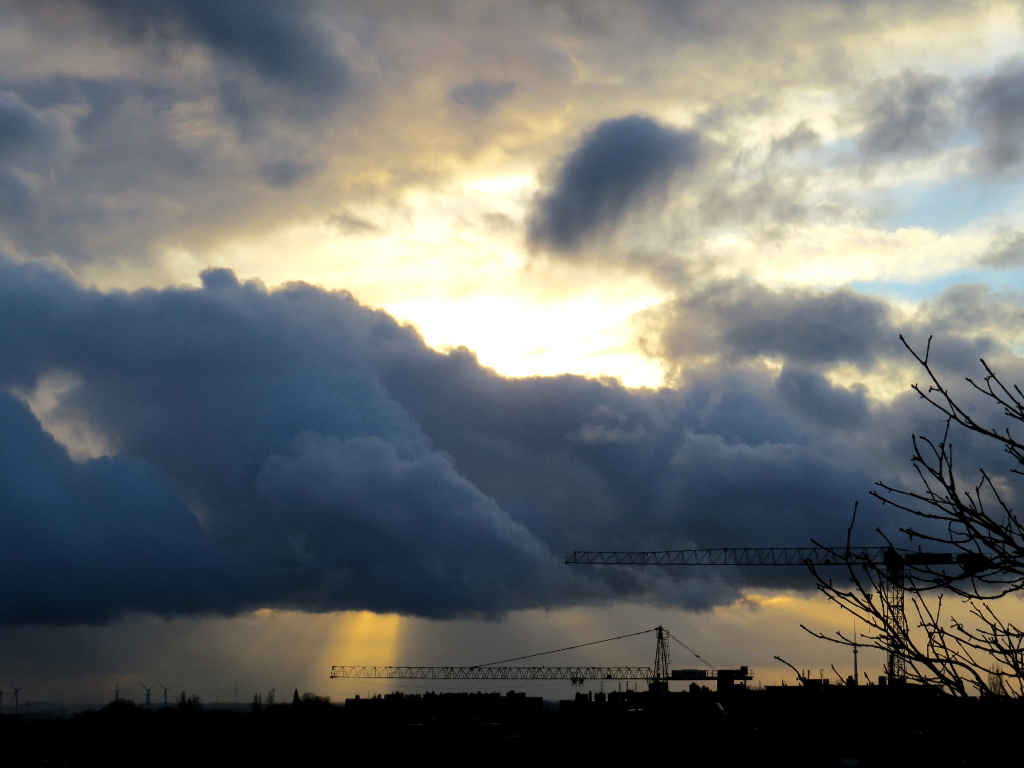 The sky over Brussels. Photo taken this afternoon from our living-room window looking southwest.