On Monday I had the pleasure of going out to Gothenburg University’s recording studios at Medicinaregatan. I was recording a few texts for the Swedish National Tests in English 5 and 6 – the upper secondary level exams. I can’t tell you about those text of course, they’re secret. (And that link may or may not take you to one of my recordings.) But as always the experience reminded me of the first time I sat in a soundproofed room to record material for a schoolbook.

It was at the national radio station in Sofia, in Bulgaria and I was 24. In 1982 Leonid Brezhnev still ruled the USSR and Todor Zhivkov ran communist Bulgaria behind the Iron Curtain. I was teaching at the 114th Bilingual Gymnasium School, one of seven in the country where teaching took place in both English and Bulgarian. Bulgaria and Britain had a cultural exchange agreement. This allowed a number of Bulgarian postgraduate students to study at British universities for a year. In exchange, the British Council recruited a few English teachers to work in these bilingual schools.

This was my first job as a teacher, my first experience of working abroad and my first trip to Eastern Europe. It was all very exciting and new.

Although there were seven similar schools around the country, mine was the only one in the capital. Being a teacher in the capital had its perquisites, and one of them was getting invited along to record for a new school textbook.

What I remember most vividly was the team of us who were going to record showing up at the radio station. And being kept waiting in the vestibule at gunpoint while our identities were checked.

It wasn’t like we were lined up against a wall. This was Bulgaria after all. There were five or six of us. The three English teachers from the school, a young man from the Ministry of Education and the school’s headmistress. The textbook author may have been there too. We milled around between the swing doors and the reception desk with one or two other evening visitors. But the young soldier who slouched behind the reception desk had a Kalashnikov laid on the table and it was pointed at us in a careless sort of way that was almost more frightening. What if the safety catch was off? What if his finger was twitching on the trigger?

Before any disaster, though, the word came down that our papers were in order and we were allowed in. 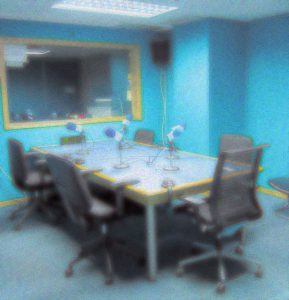 My next memory is of the recording studio. It was quite a large space with a round, spot-lit baize-topped table, and microphones protected by puff guards. I think there were only the three of us English teachers in the room. Everyone else was on the other side of the glass. What I particularly remember about this – and it’s the memory that comes back every time I go into a recording studio – is the dead quality of the sound in the room. Because all the surfaces that in a normal room reflect sound to some degree – the floor, the ceiling, the walls, the furniture – are covered in sound-absorbing material, all the sounds that you make are swallowed. I still think it’s a very strange experience.

I remember two things from what I recorded that night in Sofia. One of the texts was a conversation. A group of English workers in a VW bus were travelling on holiday in Bulgaria. My character was a young man who was not yet fully convinced of the value of communism. He was being persuaded by the experience of seeing the achievements of the Bulgarian Communist Party while driving around the country. I read the text and did my best to make it sound convincing, but I kept thinking of the Kalashnikov at the reception desk.

I was a little more comfortable with the other text I remember. It was more of an historical account. The trial of Bulgarian hero Georgi Dimitrov. Dimitrov led Stalin’s Third Communist International in the 30s and was arrested in Berlin for complicity in the Reichstag fire. His trial in Leipzig was world news in 1933. But even though it was retelling an historical event, the text I had to read was strident with indignation at the treatment that poor Georgi Dimitrov suffered at the hands of the Nazis. They took away his reading glasses so he had difficulty reading all his trial documents! Having at the time recently read Alexander Solzhenitsyn’s One Day in the Life of Ivan Denisovich and The Gulag Archipelago – not to mention Primo Levi’s If This Is a Man – I thought Dimitrov got off quite lightly.

I’ve seen the inside of a number of different recording studios over the years. But that night in Sofia was the first, and imprinted itself. So that every time I go back into a recording studio the memory returns. I don’t remember what I did after the recording that October night. I probably walked home with the other teachers through the warm dark. (The Bulgarians housed us all in the same building, the better to keep tabs on us.) And I never heard the recordings I made or even know whether the book was published.

The original illustration of a radio studio comes from the Wikimedia Commons collection. I played around with it in Photoshop. You can see the original photo here: https://commons.wikimedia.org/wiki/File:Estudio-Radio-Inter-181212.jpg. In conformity with the requirements of the Creative Commons license, my illustration is licensed under the Creative Commons Attribution-Share Alike 3.0 Unported license.