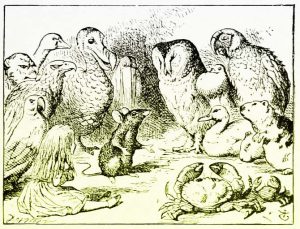 When I was about 10 or 11 I discovered a way to hide from my mother things that I’d done at school that I knew she wouldn’t like. The technique was to give her a well-edited account of my day. If I concentrated on one or two innocuous events, if my account of them was sufficiently full, then the fact they occupied only about an hour of my school day would go unnoticed. I wouldn’t get grilled about the rest of the time.

Humans are storytellers. You can define us as a species in other ways I know, but I like this one and no one has yet identified storytelling among any other species (illustration not withstanding), so why not? We share with stories. Share our experiences, our dreams, our ideas and histories, our perceptions and values. Stories are the things that bind us together socially, both at the level of friends and families, and as groups, societies, religious or political believers. Nations.

This week I’ve been exposed to a number of different stories about nationhood. I am travelling in Britain and I flew here from Sweden a week ago. Last Sunday a Swedish general election took place in which several different stories of Swedish nationhood were being told and voted upon. And on Thursday – tomorrow at the time of writing – Scotland will hold a referendum on independence from the United Kingdom.

All stories are always simplifications. Even the most intricately planned and delicately balanced novel – James Joyce’s Ulysses for example – is a simplification. Real life is untidy, incoherent, complex and glorious. When we tell stories we deliberately set out to take from real life, to hone, shave and organise so that the story contains enough reality to be believable, but no more. The day-to-day mess of reality gets in the way of storytelling. Stories always try to focus on one or a few essential details and aim to convey as simply as possible the message we want to share.

This is true whether you are a kid telling your parent about something that happened at school, or a comic telling a story to an audience, or a politician projecting a vision of a country. Your story always and ever only reflects a part of reality.

The trick, of course, is how much reality you include. My schools stories included just enough to make my day sound boring so as not to invite closer inspection. In a novel it’s often necessary to include much more reality to convince your reader. Ulysses infamously includes so much reality some original reviewers thought it was unplanned. (It is in fact ferociously well-planned and based on the structure of Homer’s Odysseus.)

The format: “X goes into a bar” is a standard way to start a joke. The naming of a nationality sets you up for a prejudice. The barman is Scots (he is resident in Edinburgh and says “Aye” instead of “Yes”) and he has the last word, so he’s the hero. The Englishman is the butt of the joke for asking a stupid question.

The nation-stories I’ve been hearing recently are almost as divorced from reality as the joke. Not quite – there has to be a flake more of truth in them – but they depend just as much on prejudice, and encourage the listener just as much not to question but to accept. They aim at once to promote and confirm an established prejudice.

Scotland is unjustly deprived of her freedom by the leeches of Westminster and the evil English. The Swedish nation (one people, one culture) is being undermined by an evil and unholy conspiracy of communists, capitalists, feminists and foreigners. The United Kingdom is mystically united by ties of blood, Scots and English, spilled in defence of the nation on the battlefields of two world wars. And so on.

I can’t help feeling that if we all read more real fiction – and discussed how it works – we might be in a better position to question the paltry efforts of politicians and propagandists.

8 thoughts on “The stories we tell”