A photo-book by Brandon Stanton 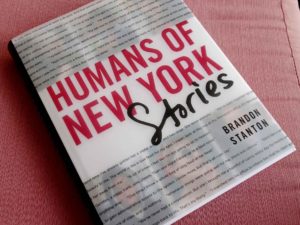 Browsing the photo-books in a bookshop recently, looking for a birthday present, I came across this volume. I picked it up and leafed through it and thought it very attractive, but not quite what I was looking for as a present. I also thought it was rather expensive, but it stuck in my mind.

A few days later I found it again, in another shop, and picked it up and carried on leafing through it. The layout and quality of the book is attractive and the photos are portraits of interesting looking people. Best of all, attached to each photo are stories about the people portrayed. But, no, I still thought it was too expensive. 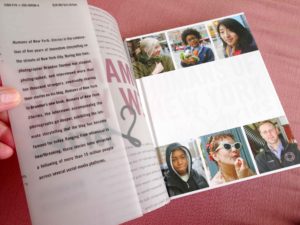 Then I came across it again, and I decided, OK, by the rule of threes I am obliged to buy this book. What the hell, it’s only money. And indeed it was only money – but now it’s a big, beautiful book of photographs and stories on my bookshelf. A book it took me four days to read even though it’s a photo-book. (I rationed myself; I took it slowly.)

According to his website, Brandon Stanton – the author and photographer – moved to New York in 2010 with the intention of becoming a portrait photographer. He set himself the task of photographing 10,000 people. Apparently he started by just taking the photos for himself and then branched out into sharing them on Facebook. When people responded favourably, he took it a step further and set up his website and started posting in various other social media outlets. (He now has several million followers on Instagram alone.)

After a time he started asking the people he was photographing for quotes to caption their portraits, and went the further step and began to interview them. Humans of New York: Stories is his second volume. The first was just Humans of New York. This is what he writes in his introduction.

Humans of New York did not result from a flash of inspiration. Instead, it grew from five years of experimenting, tinkering, and messing up… The first Humans of New York book… included some quotes and stories, but largely it represented the photographic origins of HONY. It provided an exhaustive visual catalogue of life on the streets of the city. But soon after it went to print, it became obvious that another book was waiting to be made – one that includes the in-depth storytelling that the blog is known for today. This is that book.

It is a wonderful book: 428 pages of photographs and stories. Some of them pithy one-liners… 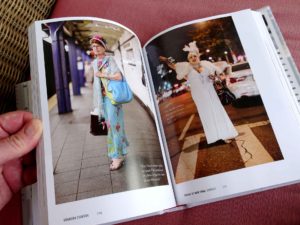 “You’d better snap it quick because I’m jumping on the first thing that comes down this track.”

“I’m late for a show. You can try to take my photo while I hail a cab.”

“I’m trying to write a book based on myself, but I keep changing.” 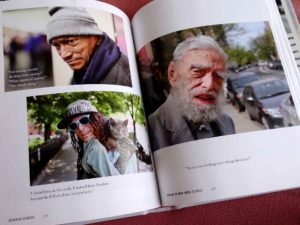 “You’re not find out a thing about me”

“I shouldn’t have moved in with him just because I was lonely.”

Others are longer pieces – some of them linked to 2 or more photographs. 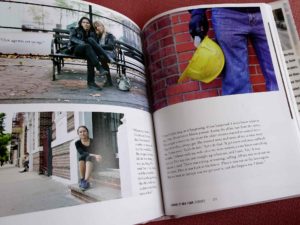 “I wasn’t planning on it happening. It just happened. I don’t know what to say. I lost about 10 or 15 pounds during the affair, just from the stress. The longer it went on, the more the other woman wanted to control me – that’s how they always get. She wanted more and more of me as time went on: ‘Come over,’ ‘Let’s do this,’ ‘Let’s do that.’ It got more and more difficult to hide. I’d been with my wife since we were 16, so she knew something was up. One day she just straight-up asked me, and I said: ‘Yes.’ It was almost a relief. There was crying, screaming, yelling. All my shit went out on the lawn. Then it was back in the house. Then it was out on the lawn again. But we went to therapy and we got over it, and she forgave me. I think.”

Sometimes there are dialogues between the photographer and his subject:

“Studying the brain is like working in a toy store. Nothing could be more fucking fun.”
“What do you think is the greatest weakness of the brain?”
“That’s a lousy question! I’m not answering it.”
“Why is it a lousy question?”
“What do you want me to say? Road rage? That we get pissed and shoot people? That the newest parts of our brain should have been in the oven a little longer? How is that going to help you? If you ask a crappy question, you’ll never get a decent answer. You need to ask smaller questions – questions that give you a pathway to finding some more pertinent information. The major advances in brain science don’t come from asking crappy questions like, ‘What is consciousness?’ they come from microanalysis. They come from discovering pertinent information at the cellular level.” 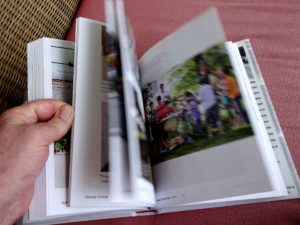 I just leafed through the book again there and disappeared for 10 minutes. It’s such a fascinating document. For anyone who takes photographs – for anyone who is interested in the stories that people tell – the book is catnip.

I’ve always admired people who can take street photos – portraits of strangers – and then talk to them. I’d like to know how Brandon goes about that. Does he take candid photographs and then talk to his subjects, or does he ask permission first? Some of the pictures in the book look so completely unstudied that I think he must take them without asking. Others are clearly posed.

In a review of his first book in The New York Times, a journalist, Julie Bosman, describes following him around for a day to see what he does. She writes:

He does everything he can to warm up his potential subjects, wearing a backward baseball cap, gray hoodie and New Balance sneakers to look casual. When he approaches a stranger, he hunches over or squats down, sometimes sprawling his 6-foot-4 [1.95m] frame on the sidewalk.
“It’s all about making myself as nonthreatening as possible,” he said. “I lower my voice, I get down on the ground.”

So that’s what he does now, but I wonder if it was always how he worked. 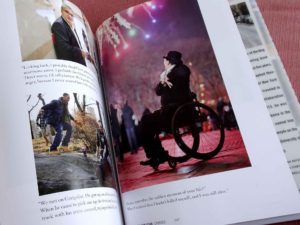 My other question, to which I haven’t found an answer, is how he gets his subjects’ permission to publish their photos. Does he have some sort of a printed formula he gets them to sign or does he just count on them not complaining? This is especially relevant for the photographs he’s taken of young children. (Though the captions sometimes suggest there’s a parent just out of frame.) 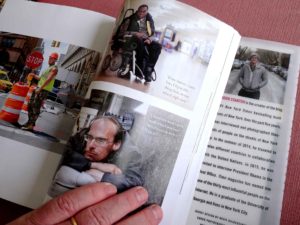 As soon as I realised Brandon Stanton had an Instagram account, I started following him. Here’s a strange thing. I don’t find his photos on-line nearly as appealing as the ones in his book. I don’t know whether that’s because as he’s become more famous he has changed his style. (Apparently he lives by his photos now.) The verbiage of the stories he reports now seems to overwhelm the photos. It could be the format, or it could be that the photos in the book are a “best of” selection. Or perhaps he is still evolving as a portrait photographer – and has evolved in a direction I’m less willing to follow.

No matter, I’ve got the book now and I’m sure I’ll be dipping back into Humans of New York: Stories for quite some time to come.

Is Humans of New York: Stories expensive? It may be expensive in bookshops, but I’ve since discovered the book on-line at half the price I paid for it.

I originally published this at the separate Stops and Stories website. Transferred here 6-20 Feb 2017.