The Saint Job Fair in Uccle: giants, a brass band, death and the baker, a boy in a bubble, a jousting knight and a sleeping cat… among others things

About the middle of September, all around Brussels (and for all I know around Belgium too) fairs are taking place. Some of them seem to blend into the weekly markets (such as the one at Place Flagey), but others are unique to themselves. There are sideshows and performances, parades and music, and some take the opportunity to promote a local district or municipality. My guess is that they have developed from harvest festivals in much the same way as Thanksgiving in the USA, but as local rather than national affairs. Last year, my first September in Brussels, I simply registered what was going on. This year I thought I should get out with the camera and take some photos. 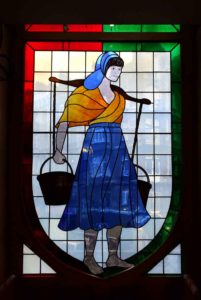 Then came the question – where to go? Up the road towards the city centre, the Parish of Saint Giles (Parvais Saint-Gilles) was advertising a major effort with processions from four different starting points in the municipality all leading to a celebration of Les porteuses d’eau (the women waterbearers). I was tempted.

Then I saw that my own municipality was offering the “129th Annual Market of Saint Job”.

I’m not sure why the Old Testament prophet is dignified as “Saint” Job in this corner of Belgium. A trawl through the Internet doesn’t leave me much the wiser (though I really doubt it has anything to do with the Orthodox Saint Job of Moscow, Wikipedia). But I’ve always had a soft spot for Job, so Saint Job’s market won the toss. 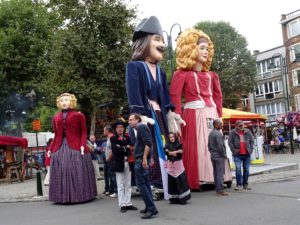 The Belgians have a fascination for géants – giants. This seems to be a tradition that has hung over from the Middle Ages. Every district of Brussels has its own giants who are wheeled out (literally) every year for these fairs. They also make occasional appearances at other spectacles and events to represent the spirit of their district. At the Saint Job fair the two principle giants were a fellow in a bicorn hat and a curly-haired blonde. The two had a couple of half-sized giant children who orbited around them. 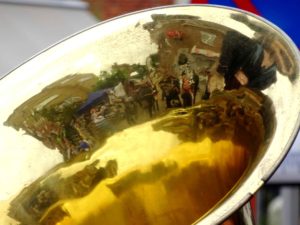 Several of their helpers (the people necessary to manhandle them over cobbles and kerbs) were also dressed up – as you can see from the photo. They looked like toys the giant children might want to pick up and play with.

Of course, you can’t have a parade or a festival without music, so there was a brass band on hand. In this photo you can just make out the tuba-distorted reflection of the male giant at the head of the parade. 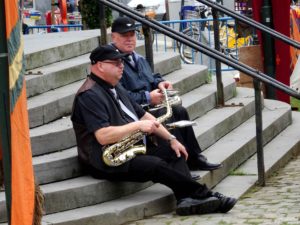 The band had a lot of blowing to do, so they were happy take a break now and again. Here on the steps outside the church. (I think they’d want me to remind you, by the way, that the saxophone was invented by a Belgian – Adolphe Sax. You can post your heartfelt thanks below in the comments. Or not. As you wish. 🙂 ) 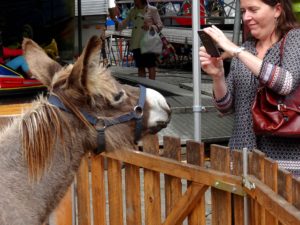 Apart from the parade and the giants there was an exposition d’animeaux de la ferme. (This was one goat, one donkey, some chickens and a small selection of child-magnet-rabbits).The donkey was very obliging and happy to pose for photos when other people pointed their cameras at her. Me, she turned her back on. 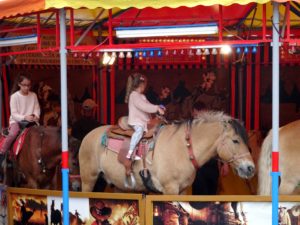 There were also some ponies that had been coralled into an area like a small roundabout, and were walking around in a circle. Each had a small child uncertainly perched on top. There was a recorded – very distorted – voice blasting out a message in French. A message punctuated with the sound of a cracking whip and a “Yeeha!” I just can’t feel convinced by a “Yeeha!” when it’s part of a sentence in French. I’m probably deeply prejudiced. The inevitable stall for face painting meant there were quite a number of kids running around with startling faces. The one that startled me most of all was this young man’s face. He was watching with intense interest as this baker demonstrated his craft. You could buy samples of the bread once baked, but personally I found the presence of death at the baker’s side a bit off-putting. 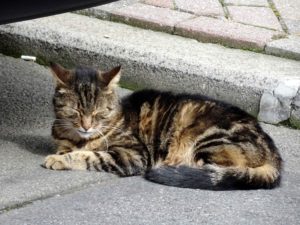 There were other things for kids to do at the fair. They could visit the exposition de chats d’exception. A lot of very indolent pedigree cats in travelling cages. The cat show took place in a rather a dark, enclosed hall, so I came away without any photos. On my way home, though, I met a street cat I know who was happy to let me photograph him in his favourite place, on warm tarmac under a parked car. By way of a fill-in photo for all the siamese and persians I missed. 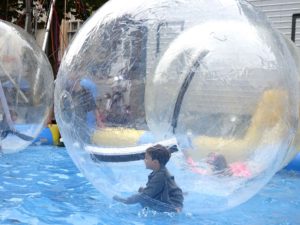 There was a piste d’agilité vélo, a bicycle obstacle course, overseen by two dour police officers. It didn’t look a lot of fun and certainly while I was there, didn’t seem to be attracting much interest. By contrast kids could also get their parents to pay to have them zipped into plastic balls in a paddling pool. This looked to be really popular. It gives a new sense to the Boy in the Bubble. 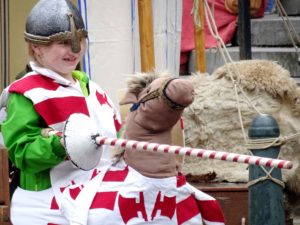 It didn’t surprise me that so few kids were interested in the bicycle obstacle course, though I was disappointed so few wanted to try out the medieval jousting. However, I was patient and eventually a happy tourney rider showed up to reward me.

I hung around the fair from about 11 a.m. until 14.30 hoping to get some photos of the concours du chien le plus sympathique. I like sympathetic dogs – and these were very sympathetic dogs remember. 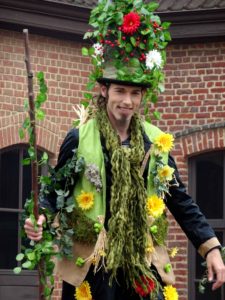 Unfortunately for me it seems everyone likes sympathetic dogs . (Well, of course. I should have guessed.) Probably the most well attended event of the fair, by the time the parade started the crowd pressed too densely around the stage. I tried, but there are no photos I want to share.

So I gave up. I was actually on my way home when I met another giant. Not quite in the same league as the official ones, perhaps, but he had a charming face and happily posed for me to take a photo. This Green Man was standing on stilts. He was about as tall as the bicorn hat giant’s shoulder.

That was my visit to the Saint Job Fair.

Originally published on the separate Stops and Stories website. Transferred here on 6-20 February 2016.

4 thoughts on “The Saint Job Fair – a September event”