A reveiw of Orsinian Tales by Ursula K LeGuin 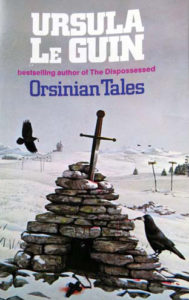 Although she is better known for her science-fiction, LeGuin has turned her hand to many different genres over the years. In her stories from the imaginary central European country of Orsinia she focused her talents on historical fiction. The 11 stories that make up the Orsinian Tales are each set in a different historical period from 1150 (“The Barrow”), by way of 1640 (“The Lady of Moge”), to 1965 (“The House”). However LeGuin’s interest in politics and recent history, and her romantic vision, lead her to focus on the 20th century.

The book opens with “The Fountains” of Versailles. Dr Kereth, a cytologist, without planning it, finds himself with the opportunity to seek political asylum in France, escaping from the communist state that Orsinia has become by 1960. His choice is typically Ursuline – by which I mean not obvious, but one hundred per cent believable. The book closes, appropriately, with “Imaginary Countries”, a lovely little account of the last days of a summer holiday. It resonates with warmth and a nostalgia for childhood.

In between, the stories visit people in different classes of society, in different periods, but all struggling with universal human issues. Birth and faith in “The Barrow”, love and longing especially in “Conversations at Night” and “Brothers and Sisters”, sanity and murder in “Ile Forest”. There is a search for freedom in many of the stories, perhaps most in “The Fountains” and “The Road East”. Loyalty and betrayal figure in “The Lady of Moge”, exclusion and inclusion in “A Week in the Country”. The art of knowing and being oneself is another theme of “Brothers and Sisters”. In “An Die Musik” the focus is the creative impulse itself. Why write (in this case music) in a world where creativity has dubious economic value and bestows no material power?

Although each story contains indications of the time period in which it set, each also concludes with a year. Sometimes, if you’re not sure exactly when the story is taking place, coming across the date at the end can cause you to re-evaluate what you’ve read. For me in particular “Imaginary Countries” is made all the more poignant by discovering at the end that the story is set in 1935. Immediately I find myself calculating. Stanislas is 14 so he’ll be called up to the army in three or four years and find himself fighting. Perhaps against a German invader, perhaps alongside German allies in the Second World War. And what will happen to Josef and his future at the seminary? What will happen to Paul and Zida and the Baroness?

At least one of the stories, “An Die Musik”, was first printed as early as 1961 (it was LeGuin’s first published short story). However the Orsinian Tales as a collection was published in 1976. Of her science fiction, LeGuin has said she often writes a short story as a lead-in to writing a novel, or as a pendant piece to a novel completed. On first glance, the Tales fit this scenario. They precede by three years the 1979 release of Malafrena. Malafrena, LeGuin’s first published historical novel, is also set in Orsinia, sometime in the middle of the 19th century.

But appearances can be deceptive. In her essay “A Citizen of Mondath” (Foundation #4 1973), she describes the Orsinian stories as her way into creative writing. The means by which she learned her craft. By 1961 she had written four novels set in Orsinia, none of which she could publish. Her shift into writing science-fiction, which took place in that same year, proved the door to publishing success. But she never forgot Orsinia, and I for one am glad of that.

What good is writing?

The Orsinian Tales are a good read, and good to re-read. I’ve just re-read them now after a break of at least 10 years – and I first read them in 1980 – and I testify that they hold up. At the end of “An Die Musik”, the protagonist Ladislas Gaye thinks about music in a way I believe it is relevant to think about writing.

What good is music? None… and that is the point. To the world and its states and armies and factories and Leaders, music says, ‘You are irrelevant’; and, arrogant and gentle as a god to the suffering man it says only, ‘Listen.’ For being saved is not the point. Music says nothing. Merciful, uncaring, it denies and breaks down all the shelters, the houses men build themselves, that they may see the sky.

I like to think that good writing does that too. And by that criteria – as by many another – LeGuin’s writing is good writing.

A version of this review appears on my Good Reads channel here.)

I originally published this article on the separate At the Quill website. Revised for spelling and SEO fine-tuning (including a featured image) and transferred here 26 March 2017.