When we’re visiting a new place, and feel we have the time, Mrs SC and I often take a walk away from the tourist routes. This is what we did last weekend in Kortrijk. But first we did the tourist thing.

Kortrijk – French name Courtrai – lies in the West Flanders district of Belgium, close to the French border. It’s built on the river Leie – French name Lys – a branch of the Scheldt. (Not only is Kortrijk a part of bilingual Belgium, it also forms a part of the Lille–Kortrijk–Tournai Eurometropolis that straddles the border with France.)

Once the river flowed past the city to the north and fed a moat that embraced the city walls south and east. Now it runs through the city, providing photo opportunities with medieval bridges.

Although, in fact, while pre-industrial Kortrijk is obvious on a map, there don’t seem to be a lot of medieval buildings. No remnants of the city walls that we could see. There are churches, the Beguinage, some bridges, the old city hall and the freestanding belfry in the market square. The belfry once belonged to a Guild Hall now gone, but the 48-bell carillon still plays. (In competition while we were there with amplified pop music for an under-14 football tournament played in sandpits.) I guess the paucity of older buildings is down to the industrial revolution. Or, perhaps more significantly, to the two World Wars.

From 1914 until 1918, the First War’s front line ran by not far off to the west. Like Lille, Kortrijk was on the German side and a staging post for troops going to and from the front. It was also used for the hospitalisation of the German wounded who were tended in a hospital (now demolished) on the Schouwburgplein (Theatre Square).

There is little obvious sign of the Great War in the town. A few signposts with poppies and QR codes (such as the one I followed from the Schouwburgplein) take you to on-line pages with brief information. Otherwise, what struck us about the town was the extensive building work that seemed to be going on.

Older buildings that survive are being restored, but new constructions are going up behind scaffolding all around. On our visit we looked around the centre and visited the Market Square and Kortrijk’s historic City Hall. I took a picture of the freestanding belfry in the square distorted through a window of the council chamber. 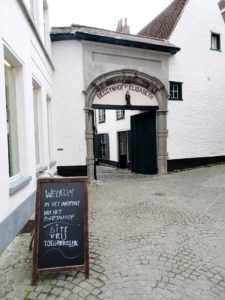 Then we visited the Beggynhoff St Elisabeth, Kortrijk’s Beguinage and home to the very last of the Beguines, Marcella Pattyn who died 92 years old in 2013. We visited the Church of St Martin’s where I got a coughing fit and had to flee outside chased by the echoes of my strangulated attempts to stop myself. And more successfully (more quietly) we visited  Onze-Lieve-Vrouwekerk (Our Lady’s Church) and admired its modern stained glass windows.

After that we followed part of the route of the Golden Spurs to the museum called Kortrijk 1302. A modern construction butted up on an older building, the two interconnected to make a single structure. Here we learned about the museum’s take on the Battle of the Golden Spurs in 1302. (The first of six Battles of Courtrai/Kortrijk according to Wikipedia.) That’s a story in itself. It was the one I originally thought to tell this week, but I’ve not researched it enough. Maybe next week.

We snacked at a food truck festival we stumbled upon in the park behind the Beguinage, and then set out for Overleie and Buda Island. This was our walk “off the beaten tourist track”. You see that there’s a place in a Belgian city called Buda and – if you’re us – you think: Budapest! And: Why? So of course we had to visit. 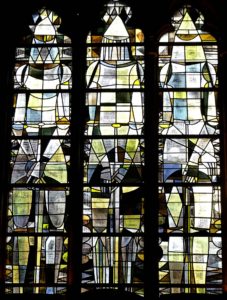 It seems the island was added into the city of Kortreij by major new fortifications in the 1690s. This about the same time the army of the Holy League liberated Hungarian Buda from Turkish control. Buda lay across the River Danube from Pest, with which it was now united. Local wits in Kortreij dubbed the newly enclosed island Klein Buda (Little Buda). The name stuck.

In the 19th century Buda Island and the bank of the Leie across from it – the Overleie – seem to have become increasingly industrialised. Here were flax mills, wharves and warehouses – the making of linen cloth was an important industry for centuries. (We were on our way to the flax museum in Overleie.) But all that is an era gone by. Now it seems Buda, and perhaps Overleie too, are colonisation areas for artists and others in search of space and low rents. 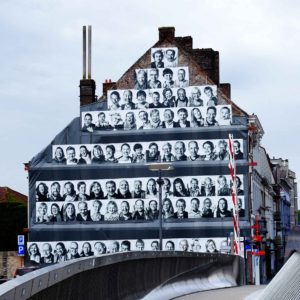 We crossed Buda Island following Budastraat and crossed the further arm of the Leie again by a new bridge. And right in front of us was the portrait wall. It’s the gable end of a block where a house has clearly been demolished, and it is papered with black and white portraits. Professional quality photographs blown up to A1+ poster size. Dramatic and humorous, these were clearly not adverts, but what were they?

There was an explanation, but it was in Dutch. I took a photo for future reference. It wasn’t till I got home and started preparing this article that I was able to go exploring on-line.

It seems this is a part of an international street art project called Inside Out. The project was initiated by the French photographer and street artist JR and financed by prize money from the TED Prize which he won in 2011. This is how the Inside Out Project website defines itself.

INSIDE OUT gives everyone the opportunity to share their portrait and make a statement for what they stand for. It is a global platform for people to share their untold stories and transform messages of personal identity into works of public art.

In 2010 the bridge connecting Overleie and Buda Island was demolished. A replacement was promised, but the months and then the years passed, and no bridge was built. Overleie was cut off from the island and from the centre of the city. (There are other routes to Kortrijk city centre, but none are as direct or as simple as the one provided by the Buda bridge.) In 2014, local artists and residents decided to protest. They nominated themselves to Inside Out, won support and carried out their project. Below is an embedded video that documents without words how they went about their protest.

If you follow this link you can read a little more about the protest and see all the portraits in close-up.

I can’t say how long it took, or how much influence the portrait wall had, but I can testify that the new bridge has been built. We walked across it on Saturday afternoon.

1 thought on “Portrait wall at Overleie in Kortrijk”