In which I learn that giving up is an option…

Nowadays, when I start reading, I keep an eye on the page numbers and see if I can’t reach page 50 by the end of the first sitting. After that I try to read two or three chapters or 20 to 30 pages at each subsequent reading. Of course this only works with longer books. With books of short stories or essays, books of poetry or other thinner volumes I have different strategies. But novels, biographies, histories – anything that has serious mass – this is the way I go now.

The 50 page first bite confirms for me that the book is worth trying to read. If I can’t get to page 50 – or at least close to that – on my first sitting, I have to ask, Why? Is it because the book is too dense? (Maybe I’m going to have to revise my idea of the time I want to give to it.) Or is the book just poorly written? Is it irritating me too much?

If the latter, comes the next question: Am I going to waste any more time on it?

Lately – and this is a very new development – my answer to that last question is, No.

Not so long ago my philosophy was, “I’ve started, so I’ll finish.” Guided by that, I tortured myself with numerous titles that just weren’t worth the effort. I’d start reading, and because I’d started I’d grit my teeth and plough on, generally making my life increasingly miserable. Every time I finished one of these exercises in masochism the relief was palpable. But why do it? Just because it’s so nice when it stops? That’s the punchline of a joke, but it’s no way to live.

And why take it as a poor reflection on myself when, despite everything, I failed to read a book even under this lash? Why not blame the author? You, yes, you, damn you! You who couldn’t keep my attention, who couldn’t interest me enough!

But really, it’s not the author’s fault either, just my own stupidity.

What has changed, apart from my having struggled at last out of the Slough of Despond, is a growing consciousness of my mortality. Life is just too short, I tell myself.

It’s something I have to tell myself because, after a lifetime of assuming that a book:
1. that’s made it into print,
2. that someone has recommended or
3. that someone I know has written, and
4. that I’ve picked up and started,
is necessarily a book I have to finish. After a lifetime of that, it’s hard not to fall back into the rut of: “I’ve started, so I’ll finish.” 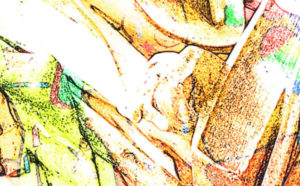 Mind you, it’s not as though I’m exactly wading through bad books. In the last eight months I’ve chosen to not continue trying to read just two. And there’s one other I’ve read but wish I’d had the strength of mind not to plough through.

(Let’s not be coy – the book I wish I hadn’t wasted my time on is Linda LaPlante’s Backlash.)

One of the two books this last year that I eventually chucked aside is Barnbruden by Anna Laestadius Larsson.

Barnbruden means “child-bride”, and, yes, it’s in Swedish. (There may be an English translation, but a quick Internet search doesn’t turn one up.) It’s a fictionalised account of a few years of the life of Charlotte – Princess Hedwig Elizabeth Charlotte of Oldenburg – the child-bride of the title. Charlotte came to Sweden in 1774, aged 15, in order to marry the brother of the King of Sweden.

The book was recommended to me because it has things in common with my Elin’s Story.

I’m not sure how far I want to go into the things about the book that made me – finally – give up. Because I didn’t give up directly. I put Barnbruden to the fifty page test and it passed. I actually got through 156 pages – the first 22 chapters. (There were 252 pages left to go.) It wasn’t that I found the Swedish difficult. Of course, as someone who only learned to read Swedish as an adult, as someone who has not put nearly as much effort into appreciating Swedish as I have into appreciating English, I’m in no position to pass comment on the quality of the Swedish Ms Larsson writes. So I won’t say anything more than that I thought the language was pretty straightforward.

However, I became increasingly irritated by two things that have nothing to do with the language. First, character development (or lack thereof), second historical accuracy.

The novel starts quite well, with the heroine’s voyage to Sweden and her initial experience of the court. That was what saw me through the first 50 pages. But after that, after that it deteriorates into banality. It holds out the promise of character development, but then betrays that promise. Of course, I have to wonder whether I’m being too harsh. Whether the book is just very slow in setting up its character development. But I gave it three times as much space as I give other books to prove itself to me and it still didn’t seem to be going anywhere.

Barnbruden has clearly been a success. It was published in 2013 and there are already two sequels. Perhaps I was expecting too much from it. Maybe it’s only a romantic romp got up to look like a serious historical novel. Only a bit of fluff successfully marketed as an example of feminist historical fiction. But, you see, I was reading it under the impression it was a serious historical novel, that it was actually a work of feminist historical fiction. More fool me.

The eck of history

It seems as though Ms Larsson is very taken with the eck of history – with body odour and sweat, urine and shit, lice and fleas – and is keen to share. Also that she is so keen to write about the experience of women in the past that she’s prepared to insert modern perspectives and activities into the historical narrative. I think this is particularly noticeable when she writes about sex.

I’m not sufficiently well read in this particular period to be sure, so I could be wrong. A large part of the book seems to draw on the diary that Charlotte kept for all her life and I haven’t read the diary. It’s possible Charlotte was sufficiently indiscreet to actually write about some of the things Ms Larsson passes on. But, I have my doubts.

For example, is it really likely that Charlotte would have all her body hair shaved before her wedding night? Maybe it is, maybe it happened, maybe she recorded the experience in her diary. It just seems unlikely. I do know that not 150 years before Charlotte’s wedding, in England, women had their body hair shaved only to combat disease – in particular sexually transmitted disease. At that time and in that place, shaved body hair marked a woman out as a diseased prostitute. Shaving body hair simply wasn’t acceptable for women with any claim to respectability – especially among the aristocracy. (Shaving or plucking hair from your scalp line to raise your forehead was a different matter.)

Possibly the Princess also wrote in her diary an explicit description of the transgressive scene Ms Larsson retells. The one in which Charlotte’s maid and friend Sophie von Fersen introduces her to sex by kissing her like a man and fondling her body – a practice Sophie claims to have learned from her brother. Certainly the diary appears to have been started as series of unsent letters addressed to Sophie von Fersen, so what do I know?

It may be all there in the diary. But in Barnbruden it honestly reads as far too modern. By and large most of it fails to advance the story, so it also reads like window dressing.

In the watches of the night

It feels bitter and harsh to be criticising this book. It feels a lot like the voice of failure, as I lie awake in my bed and run through the things I hate about this book. This book I’ve just put down on the bedside table in order to compose myself for sleep. Which I’m not managing to do.

What right, I ask myself, what right do you have to criticise Anna Laestadius Larsson? You who have squandered the last eight years failing to write your own historical novel? I defend myself: Don’t I have the same right as any reader who feels short-changed? Yes, I grant myself that – but it still feels like envious disparagement. Shame!

I can’t sleep and find myself gazing into the well of my self-doubt – as one does at 3 o’clock in the morning.

Finally, I sit myself up and go on-line to see what I can find out about Ms Larsson and how the general public, and any historians, may have reacted to her book when it came out.

You’re never weird on the Internet

Reviews and the Swedish language pages of Goodreads. First off, I discover that Ms Larsson isn’t an historian but a journalist – which is a partial explanation. Then I discover that nevertheless she has her fans. (And why not? Even journalists need people to love them.)

Most of the women – I only found women – who have read the book and written about it on-line have enjoyed it. Some have even been inspired by it. Some, though – I’m relieved to see – have reacted like myself. Sisters! (I cry – but softly, it’s the middle of the night after all.) I am not alone. Not uniquely weird, not the only person to have found the history in Barnbruden dubious and the characterisation dodgy.

After reading all the negative criticism I could find on-line (not much) I felt less as though I was at fault for not enjoying the book, and more justified in putting it aside. And actually able to switch off the light, and the tablet, and go to sleep.

It took a long time to write this entry. I kept hesitating about publishing my critique of Barnbruden. Well, I made the decision at last.

Next time I’ll write about a book I actually enjoyed reading all the way to the end – and how I read as I get towards the end of a book I like.

A note about some of the subheadings

I’ve started, so I’ll finish
This is a catchphrase from the BBC TV quiz series Mastermind. Coined by first presenter, Magnus Magnusson, it was incorporated into the title of his account of the programme I’ve Started, So I’ll Finish: The Story of Mastermind (1997).

More fool me
This is a widely used expression. Some people say “The more fool I”. Shakespeare did in As You Like It (Touchstone: “…now I am in Arden; the more fool I! when I was at home, I was in a better place: but travellers must be content.”) But more recently “More fool me” is the title of a song by Genesis (1973) and a work of autobiography by Stephen Fry (2014).

In the watches of the night
An expression meaning the deeper, darker parts of the night. The term refers to guard duty (watch duty) in time of war or uncertainty – or simply during a curfew – and is recorded (as “night watches”) in the King James Bible and the Book of Common Prayer. It’s been used repeatedly in the form “watches of the night” as the title of books, novels, short stories and poems.