A couple of weekends ago, Mrs SC and I took the ferry across to Denmark to visit Skagen. I thought I might make life a little easier for myself this week by posting a gallery of photos I took during the trip. Many of the pictures below originally appeared in my Instagram or Twitter streams where I’m trying to post a daily photo. (I don’t always manage.)

At home in Gothenburg we live in a flat high up in a block that was built in 1958. This makes the block more or less my contemporary. The lift that served the block for all the years we have lived here was not put in from the very beginning. Some of the older folk in the building remember moving in, back in 1958, and having to carry their furniture up the stairs because the lift shaft was empty.

Still, the lift we knew couldn’t have been less than 59 years old. It worked, slowly, and it groaned and creaked and sighed and shifted. The last time there was a major renovation, about five years ago, the lift was given a voice. A mechanised woman who intoned the names of the floors: “Våning ett, Våning sju”. Våning is the Swedish for storey, but the way the lift pronounced it sounded like “Warning”. As though she was saying “Warning one, warning seven.” All a bit ominous. 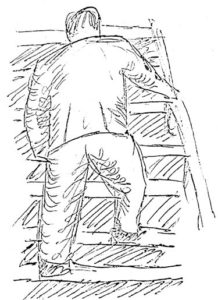 While we were away in Brussels, the Board of our condominium and the AGM decided on a major investment. A new lift system. This year, for four weeks around the end of May and the beginning of June, a team of workmen laboured to install it. So for four weeks there was no lift. I became intimately familiar with the 9 flights of stairs up to our door. My thighs are now pillars of steel and my general condition has noticeably improved. (Disappointingly though I didn’t lose any weight.)

My mother-in-law Ulla, who’s well into her 80s, lives one floor up from us. She’s a pretty tough lady and was climbing the stairs up and down too, though perhaps not daily. She was pausing on various landings where our neighbours put out chairs for people to rest their legs.

Over the lift replacement period Mrs SC took four weeks of her annual holiday to help her mother. They went away together for a week and the rest of the time they drove or bussed out and about around town. The last weekend though, Ulla spent away from home with her son “up country” in Munkedal. That was the weekend Mrs SC and I decided to have our own break and took the ferry to Denmark.

I should add that the four weeks of the lift replacement coincided with unseasonably warm weather. High summer in late spring. The thermometer recorded temperatures up around 28°C, 29°C, even on a couple of days 30°C. It was with mixed feelings we arrived in Denmark to find the weather was breaking. On the one hand, grey skies and occasional showers were a welcome change. On the other hand, we were on holiday, damn it, and by the seaside too. And for once not climbing the bloody stairs in our bloody block of flats.

We hadn’t come entirely unprepared – I had a sweater and Mrs SC had a jacket. We both had umbrellas. Generally we faced the weather with resolution and made the best of it.

A hundred and fifty years ago Skagen was a fishing village up on the northeast point of Jutland. The headland itself is called Grenen. Grenen means “the branch”. It’s a long sandbar and reef that sticks out like a branch into the sea. (Now this has me thinking about the English word groyne – a long low sea barrier built to break longshore drift and keep beaches from washing away. Could the words be related? The Online Etymological Dictionary says no, but I wonder. Grenen in Swedish can also mean crotch, think “groin”. The same pronunciation as groyne… But maybe I’m digressing too far.)

At Grenen the currents of the Kattegat flowing up from the Baltic meet the currents of the Skagerrak flowing in from the North Sea. The waters off the headland churn white, even in calm weather. This was a dangerous place for sailing ships and Skagen’s historical museum, the Kystmuseet, has a map on which the many shipwrecks around the coast are plotted. They also have the open rowing boat – for ten oarsmen – that was Skagen’s rescue vessel at the time. Life here was tough back then.

Then a colony of young painters up from Copenhagen – inspired by French impressionism and by the Barbizon realists – discovered the village. The painters wanted to paint in the open air and the quality of the light in Skagen delighted them. The artists and their art attracted fans who also visited and themselves discovered the beach, the long Sønderstrand. Soon Skagen had become a resort. By about 1910 the place was even attracting Danish royalty.

One of the original Skagen artists, Mikael Ancher, married Anna Brøndum, the daughter of the local hotel owner. Brøndum’s hotel is still going strong (it was where we stayed), so you might say that was a successful fusion of art and business. Or you might instead say that Anna Brøndum Ancher, who was an artist in her own right and actually came from Skagen, is the only one of the Skagen colony who has the right to be called a Skagen painter.

Skagen’s art museum has examples of paintings by all the members of the artists’ colony, and they are housed in a purpose-built gallery. (The museum also curates other buildings in the town where Skagen artists had studios.) Photography is allowed in the museum as long as you don’t use a flash or tripod. Mrs SC would want me to add that there is a ban on bags – even small handbags – in the museum. But it seems to be OK to carry massive camera bags around with you. So, invest in a camera bag that can double as a handbag and you’ll be alright. (She’s still sore about having to put her little handbag in a locker and carry all her valuables around in her – and my – pockets.)

Our last day in Skagen the weather was colder and wetter. Fortunately we were able to join a tour organised by the Kystmuseet in what they claim is the only working pre-World War II Bedford bus in Denmark. (For the nerds, that’s a Bedford-type bus. It doesn’t seem to have come from the Bedford manufacturers in England but from a Danish company.) In the bus we joined a group of eight or so and toured around with frequent stops for the driver to turn around and explain at length (in Danish) what we were looking at.

We visited the four lighthouses that punctuate the landscape, the fish harbour that splits the Sønderstrand and is Denmark’s premier fishing port. We visited the Grenen and saw the tourists streaming out to the point and back. (But we didn’t join them.) We saw the tramp ships that ride at anchor in the great bay off Skagen, protected by the curve of the land. It’s a fine irony that this area that once saw the wreck of so many sailing ships, in the day of powered shipping is considered a safe harbour for so many giant tankers and container vessels.

Our days in Skagen were not quite as we had anticipated, but they were good in their own way. I’d be happy to visit again. I never got to see the sand-drowned church – Den Tilsandede Kirke – or the migrating sand dune the Råbjerg Mile. And it would be nicein decent weather to actually get all the way out, as far as one can, on the Grenen.

As we travelled back from the dead-after-5pm port of Fredrikshavn across the sea to Gothenburg the sun came out to give us a glorious sunset. Meanwhile the clouds pushed ahead to greet us as we landed.