Belgium is a schizophrenic nation, people say. At the Dutch end of the country everyone is Germanic and efficient, but at the French end everyone is Gallic and disorganised. As for Brussels – Pff! (And a gesture of hands thrown in the air.) The Dutch end of the country is Flanders and the French end is Wallonia, while the 19 municipalities that make up the city of Brussels are a principally French speaking enclave just within the area of Flanders. 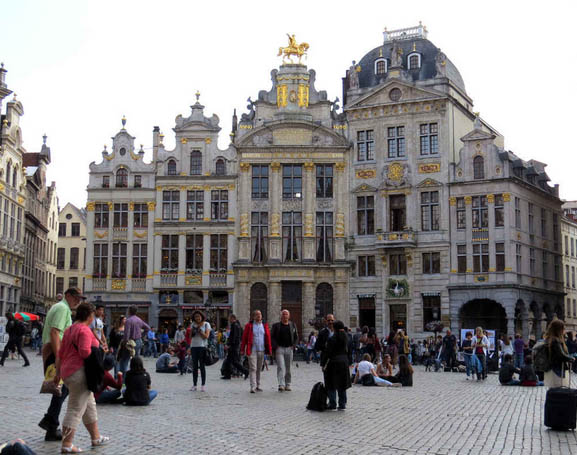 Now I really don’t want to be the sort of person who goes around swallowing clichés whole and then regurgitating them. But. Now I’m going to share with you my recent experience of seeking tourist information in Brussels. I’m afraid it does rather confirm the above.

Last week was the 200th anniversary of the Battle of Waterloo. I know I’d left it rather late, but I thought it might be nice to go out to Waterloo for the anniversary celebrations. Waterloo is not far from here at all. It’s just to the south of Brussels and many people live there and commute into the city to work. Also, there is a big expatriate Swedish community in Waterloo clustered around the Swedish school. (Attracted there originally following the major promotion of the town by a certain Swedish pop group. No doubt.)

Anyway, here I am in Brussels. Waterloo is a 15 minute train ride away. It seemed a natural thing to do to go into the Brussels Tourist Information office on the Grand Place and ask for some help. La Grand Place (French) or Grote Markt (Dutch) is in the centre of the Brussels’ tourist district. A fabulous former market square surrounded by tall, 15th century Gothic to 17th century Baroque buildings commemorating civic institutions and city guilds. The TI centre is in the south-east corner of the Place, in the City Hall (Hôtel de Ville). You enter through a short corridor past the sign that tells you (I think) this used to be a police station. To the right is an office where you can buy souvenirs and tickets. To the left an office where you can get information. If you’re lucky. 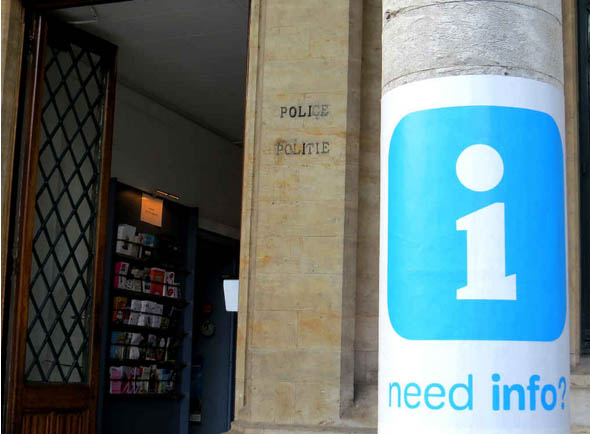 Waterloo is not in Brussels

I say that because, if you’re going to visit the Brussels TI office, you’d better come prepared with questions that relate just to Brussels. As the young man in the office politely explained, Waterloo is not in Brussels. It is in Wallonia and what happens in Wallonia – even if only just across the border in Waterloo – is a mystery in Brussels. The young man (who had very good English) managed without actually saying it to convey that he felt me profoundly misguided in wanting to visit Waterloo when I had all the delights of Brussels available to me.

But I was persistent. Where to find out about events in Waterloo? For that you’ll have to visit the Wallonia Tourist Information centre, he said. And started giving me directions. Across the square, down that street, turn left… you can’t miss it. Having already had experience of “you can’t miss it” directions in Brussels that somehow I did manage to miss, I asked for a map. He wrote the address down and drew a sketch map for me on a scrap of paper. The Brussels TI office doesn’t have maps of the city to give away to tourists who want to leave Brussels.

The Wallonia office, when I found it, was shut. Clearly the opening hours of the Wallonia TI centre are also something unknown in Brussels. They were displayed on the door however, so I made a note and went back the following day.

The Wallonia Tourist Information “Espace” is a large open room, partly given over to exhibitions. (Currently there is an exhibition for children about Ernest & Celestine who I must conclude are Walloons.) The reception desk was staffed with two people who did not seem to have much to do. I went up to them and said: Do you speak English? Then immediately corrected myself (because this is a tourist information office). Of course you speak English!

Or rather, the older man did not and the middle-aged woman with him said she could manage a little.

So I asked about Waterloo. 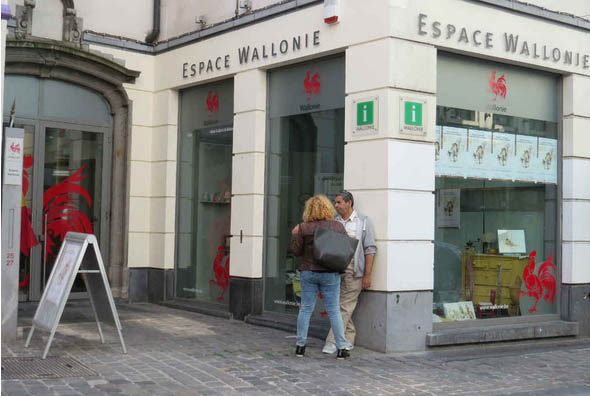 I’m not sure what Wallonia has to offer, but I would guess that the battlefield of Waterloo and the associated museums are quite a big attraction for foreign tourists. And judging by the coverage of the Waterloo celebrations in the British press, at least some tourists are likely to be English-speaking. Well, if so, they are not expected to visit the Brussels Wallonia TI Espace.

The Espace had one flyer which, to be fair, did include a few sentences in English. From it I was able to work out that there is a museum dedicated to Wellington in the town of Waterloo and a big hill overlooking the battlefield just outside the town. There are also buses from the town centre to the battlefield.

After consulting her colleague in French, the woman managed to convey to me that there is a new museum. If I understood correctly, built underground. This is a fine museum, the finest in Wallonia! But sadly the Wallonia Tourist Information Espace in Brussels had no information about it.

The lady went online but couldn’t find anything about the new museum on the the Internet either. However she was able to find a telephone number, which she used to call the museum. There was a long wait before anyone answered and then a long conversation. This confirmed the new museum is open from Monday to Sunday, seven days a week, between 9 in the morning and 6 in the evening. She wrote this down for me and was very pleased that she knew both “Monday” and “Sunday”. Her colleague congratulated her.

How to get to Waterloo

How to get to Waterloo? If you don’t have a car you must take a train from Midi, the Southern Station, or a bus. Okay. I can see from the flyer how much it costs to enter the museum and the different sites – can you tell me how much it costs to travel there? Is there perhaps a packet price? Oh dear, we don’t know. The buses are run by private enterprise and the trains originate in Brussels so that is something we can’t know about. Ask at the railway station.

(Later, at the railway station, they said, Pff! And threw their hands up.)

While I was there another tourist came into the Espace. This man spoke French and had some questions about Brussels. He talked with the man behind the counter – the one who couldn’t speak English – and although I didn’t understand everything I got the gist. It seems the Wallonia TI centre has no information about Brussels. Not even a map. Because it’s not Wallonia, you see. But they are happy to recommend the Brussels TI Centre in the Grand Place, though they have difficulty explaining even in French where it is. Since that was something I knew and the Wallonian information provider seemed so helpless, I almost volunteered to take the chap there myself. Almost, but not quite.

Leaving the Wallonia Espace, I walked up the street about 100 metres and found myself outside the Visit Flanders Tourist Information Centre. It was open. I thought: I have to. And I went in. 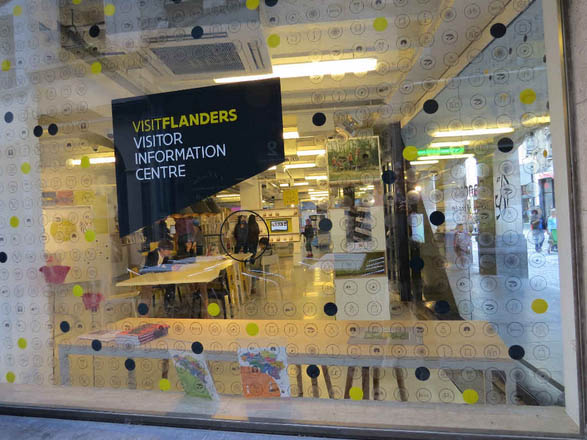 The Visit Flanders TI Centre is even larger and more open than the Wallonia Espace, and rather busier when I was there. There was a queue of seven or eight tourists, but only one member of staff, an older woman, behind the desk. I joined the queue. Obviously it wouldn’t be fair to ask about Waterloo, but I thought I could ask about Flanders Fields. Surely that’s as big magnet for foreign tourists in the Flanders area as Waterloo in Wallonia.

Standing in the queue I noticed a computer screen handily placed with “FAQ – Select your language” on it in five different languages. Under the title were electronic buttons for each of English, French, Dutch, Spanish and German. No keyboard or mouse, clearly the software was written for a touchscreen. I pressed the screen for English. Nothing happened. The screen wasn’t touch sensitive. It was actually impossible to follow the instructions, choose your language and read the FAQ.

Still, I waited in line. And I waited… But it has to be said, after I got to the head of the queue, that the woman behind the counter spoke good English and was able to give me brochures – in English – about Flanders Fields. There was a brochure about Ypres, a brochure about accommodation in the area, a tourist map and a leaflet with information about how to get there.

On the counter in front of her was a map of Brussels. The two older women ahead of me in the queue were asking about things to do and see in Brussels (in French). The Flanders TI woman not only answered them in French and made recommendations, but also gave them free tourist maps.

And so I am forced to conclude – at least in respect of tourist information offices in Brussels – it may be a cliché but the Belgian cultural divide is also alive and well and still splitting the country in two (or three).

Also, if you’re a tourist in Brussels and you need advice – I recommend Visit Flanders on Rue du Marché aux Herbes. 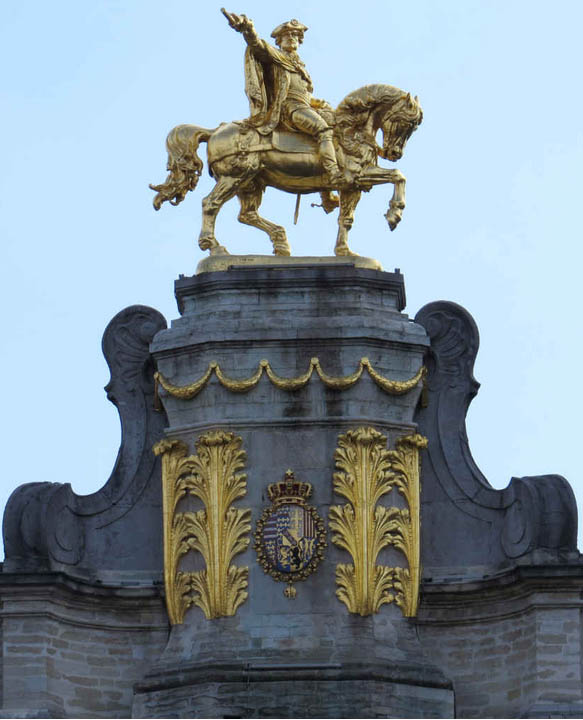 I’d love to report that I got out to Waterloo and saw the re-enactment of the battle, but no. Eventually I discovered that tickets for the re-enactments (there were several days of them) were all sold out long ago. I’ll content myself with going out there some other time. [But I never did! (October 2018)] I apologise btw for linking the 200th Anniversary reference to the on-line pages of the Anglo-jingo Daily Mail, but the pictures are really good.

5 thoughts on “Tourist Information in Brussels and around”