United Music of Brussels was a day of music to launch a new season of classical music, and I heard it announced over the public transport address system 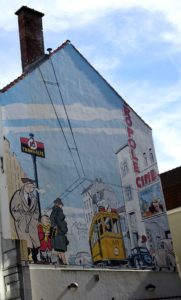 “What are we going to do this weekend,” she asked.

I’m usually stumped by this question but not this time.

“Listen,” I said. Over the tannoy a message was being delivered in English. This weekend… United Music… Belgian National Orchestra… BOZAR… La Monnaie… Bourse…

“Listening to United Music,” I improvised. “It’s a promotional day for the Belgian National Orchestra and the Royal Theatre. The beginning of the autumn season. Musicians, singers, dancers – short concerts – all afternoon in different locations. There’s more information on-line!”

“Are you sure about that?”

The Internet can answer all your questions

It’s never easy to find information about what’s on in Brussels if you don’t read French. Even if you do read French, I think it’s probably a challenge. Belgium seems about 15 years behind Sweden in terms of Internet usage and Internet literacy. I remember how it used to be. We were just as starry eyed and innocent. Just as clumsy.

Mmmnnno. Not really. But I remain hopeful.

It seems the Belgian advocates of the Internet haven’t quite grasped – yet – that design is not all. For people to take advantage of services on line, someone needs to write the software to enable the service actually to work. That if someone is to be able to get correct information out, somebody else needs first to put that correct information in. And to put it in, in such a way that getting it out is both logical and easy.

I think the truth is, most Belgians really prefer the personal touch. Face-to-face contact, human interaction, these are the things that add value to Belgian society, not digital interconnectivity and virtual reality. Which is very endearing.

Everything would happen in the afternoon, we learned from various sources. At 2 pm. Or maybe 2.30. But where? That remained a mystery.

Because we knew that BOZAR were involved, we took ourselves there first. BOZAR is the jokey local name for the Palais des Beaux-Arts in the centre of Brussels. (Beaux-Arts sounds like BOZAR.) The three people staffing their ticket office were sure they knew they’d heard about the event. Absolutely. Didn’t they have some brochures about it? Over there in that rack? No? Oh well they had had some brochures.

Two of them went into the storeroom behind the scenes to check. The sound of cardboard boxes being torn open, but, sadly, no. They didn’t have any left. We are desolate. Sad emoticon. They couldn’t suggest a place we could go to get more information, but we might find some brochures left in the racks at the entrance to the art gallery across the road.

We looked, but no.

So we walked down into the Grand Place and went into the tourist information centre there. The young man we spoke with said, Yes! He’d also heard something about the music event. Though he too was desolate. Are there brochures? We have no brochures. Wouldn’t you prefer to listen to the dance-band/oom-pah performance going on in the square?

We said thanks, but no thanks. He couldn’t make any suggestions about where we could go to find more information either.

United Music at the Bourse 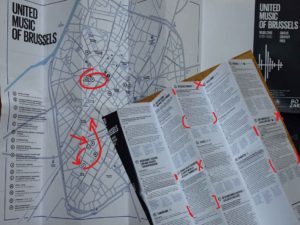 When Mrs SC and I were wrestling with the information dearth on-line, she’d stumbled across something… (Her command of French is several orders of magnitude better than mine.) Something about a concert in the Saint-Géry Market Hall. Meanwhile I remembered that I’d heard something about the Bourse in the original announcement. For want of any more reliable information, we walked down to the Bourse and thought we could go on to Saint Jerry’s after.

It turned out that the Bourse was exactly the right place to go.

Here there was a little band playing under a tent and young people in T-shirts advertising the United Music of Brussels giving out the very brochures we had heard so much about. Brochures that included maps of the city showing the different venues. At first glance they were perfect. Just what we had been looking for.

There were sixteen different venues scattered across the town with small groups performing concerts of all sorts.

Glancing through the brochure Mrs SC saw The Juliet Letters. That was for us! A place called Atelier des Tanneurs, so we took ourselves there.

Do you know The Juliet Letters? It’s a song sequence for a string quartet and a strangulated voice. A co-production by Elvis Costello (punk hero) and The Brodsky Quartet (classical music heroes). The singer at the Tanners’ Studio was the Flemish tenor Philip Defrancq. I thought he was pitched a bit high till I got home and listened to Elvis Costello’s performance again and realised – Defrancq nailed it.

On the way to the Tanners’ Studio we discovered that the map in the United Music of Brussels brochure was not really as accurate as it might have been. However, with a certain amount of guesswork and asking the way, everything worked out. Not only did Defrancq sing a couple of The Juliet Letters, he also sang an aria by John Cage (brilliant and weird and involving at one point the singer gargling with water).

The Tanners’ was an interesting space – presumably a former tanning factory though there was no evidence of the industrial process left. Just a two story interior space with a wrought-iron or cast-iron colonnade and a bridge across the middle. Acoustically rather good.

Which was more than you could say about the next venue.

From the Tanners’ we took ourselves to Les Bains de Bruxelles. An interesting experience in itself, just trying to find it. I’ve heard about this public swimming pool. It is an architectural feature, not least because of the pool itself – on the second floor of the building with views from the window out over the town.

The performers had a stage at one end of the pool in front of the windows and a drummer and a violinist played while a woman danced a wild modern ballet. 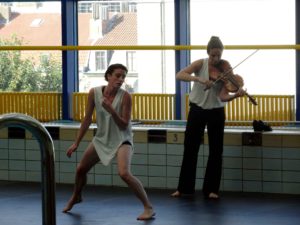 The acoustics were – interesting perhaps is the kindest word. There were a lot of echoes and a lot of foot stamping as well as drumming. But it was an experience to sit there on the tiled benches enveloped in a faint cloud of chlorine to watch and listen. There was quite a crowd at this venue – possibly because of the building rather than the performance.

The lap of victory

At the end, after the performers had taken their bow and the applause, they dived into the pool. Well, the dancer and the violinist dived; the drummer jumped. And they swam the length of the pool to even more applause. The dancer and the violinist racing one another (the dancer won.) The drummer kept his glasses on and did the breaststroke and came in last. Mrs SC and I reserved our special cheers for him. 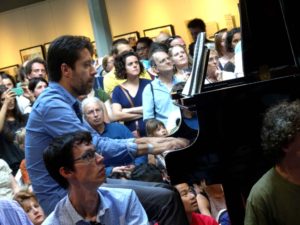 After that we took ourselves to the Saint Jerry Market Hall and were in time to hear the United Music’s concluding performance. A pianist played in the main hall and a choir sang in the market’s upper level. As it turned out, the choir were from the Belgian National Theatre, La Monnaie. The venue was crowded and the choir were a bit of a surprise as they were dressed like the rest of the audience. We only realised who they were when they started to sing. It was a good way to end the day.

In all we saw and heard three concerts (plus a little bit at the Bourse). And I’m not sure we’d have managed more than one more even if we’d had the brochure-map and got into town for when the whole event actually kicked off at 14.30. 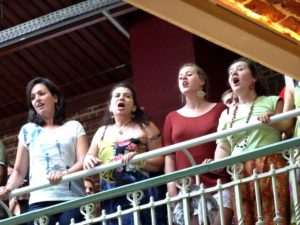 Besides, we had all the pleasure of our initial face-to-face human interaction with the good people in the BOZAR ticket office and at the Grand Place TI centre.

More than the music, the exercise was interesting for the opportunity to see the different venues. To see parts of the city we might not otherwise visit. I’ve kept the map and will, later, try to see some of the other sites.

Afterwards Mrs SC and I took ourselves to the Cuban restaurant La Cantina on Rue du Jardin des Olive for our evening meal. (And she continued her dogged search for the perfect iced-coffee.)