My crowd funding campaign for My Gothenburg Days has nine days left to run. Nine of 45. Still, it’s already worth thinking about what we have learned.

When I started I had no idea how far it would get, but I had hopes. With nine days left I no longer expect even to come close to my target. At the time of writing the crowd funding site records 12 backers – of whom my wife and I are two – and the project is just 4% funded. My dedicated Facebook page has 50 followers. I assume that some of them at least would like to buy a copy of the book when (if) it’s published. But that’s still not enough. 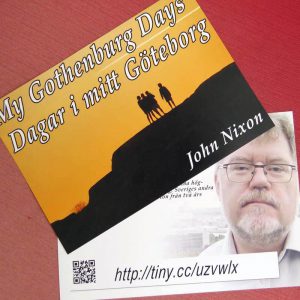 Driving a campaign to attract support as I have done turned out to be very much more difficult and time-consuming than I expected. I know now I started out far too optimistically. On the crowd funding website, I attracted the bulk of my support during the Gothenburg Book Fair. That was at the very beginning of the campaign.  However, even had I continued at the same intensity for the whole of the 45 days, attracting 1% support per day would still not have got me even half of the sponsorship that I needed. I saw this on day three.

Many of the people who’ve expressed an interest in my book have actually shied away from funding me through FBM. I thought using a crowd funding website would make things easier. It made me feel better to know sponsors were guaranteed to get their money back if the campaign failed. But it seems this isn’t a consideration that’s weighed much with my potential supporters. On the contrary, some seem actively to dislike the idea of an Internet middleman.

Perhaps the sort of people who might be interested in my book just aren’t computer savvy? Perhaps they are Internet wary?

I think part of the problem may be that you can’t just sponsor my campaign – any campaign. First you must open an account with Funded By Me. This has proved a stumbling block.

It turns out FBM is less user-friendly than I’d hoped. I’ve had both e-mail exchanges and telephone conversations with people who have tried and failed to open accounts with them. I don’t know where the problem lies since I haven’t sat with my contacts to watch them as they try to set up their accounts. Now, these aren’t stupid people by any means. I must assume that it’s the website that’s at fault.

I’m all the more inclined to believe the website is faulty because I’ve also had problems with them, though of a different nature. A few days after my campaign went live I noticed that the website was no longer displaying my target sum, or any of the sponsorship levels, in Swedish kronor. Instead it was converting them into euros. And not rounded sums either, but fractions along the lines of “€19.37”. Most of my potential sponsors are Swedes, and Sweden doesn’t use the euro, so I guessed this might put people off.

I got in touch with FundedByMe and after a series of e-mail exchanges… (Getting a response from them felt at times like pulling teeth.) After a series of exchanges I learned that the company had decided – without notice and just after my campaign went live – to make euros the site’s default currency. According to FBM, however, the currency displayed should be the national currency of the country where any given user is at the time they access the site. Since I could clearly see that in Gothenburg the currency was being displayed in euros, FBM admitted there was a bug in the system. A bug that had “selected” me to mess with. (“Selected” was their word.)

I really wasn’t sure how to take this. Bugs don’t select, they behave randomly, but I was seeing this problem regardless of how I connected to the system. Whether I used a computer, a tablet or a smartphone, or where in Gothenburg I connected from. Eventually FBM promised to look into it, and now it seems to work properly, but they never got back to me either to confirm that they’d fixed things or to apologise.

A good deal of the time I spent chasing FBM was time I could have spent promoting my campaign, so that also slowed things down. It took a great deal of the wind out of my sails too. When I had time to promote the campaign I found myself resenting that I needed to promote FBM as well. Not a helpful reaction, but human I think.

Really, I can’t blame Funded By Me for the failure of the campaign. I was not sufficiently well prepared and my target was too ambitious. I ought to have set the campaign up differently. And I ought not to have used a website that imposed such a limited campaigning period.

We live and learn.

But fear not, I am now cooking up Plan B!

3 thoughts on “What We Have Learned”