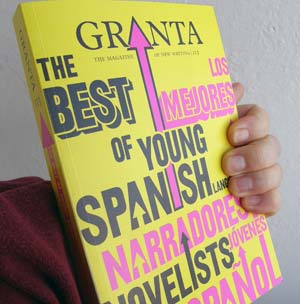 As the editors of this edition Aurelio Major and Valerie Miles point out, this is the first time Granta has published a whole edition of non-English writers in translation. Personally, I think it’s to be welcomed on those grounds alone. (Apparently — this was news to me — Granta has been publishing a Spanish language edition for 7 years, though whether Granta en español is a translation from English or an independent Spanish language magazine I don’t know. I really hope it’s the latter.)

So, top marks for this effort!

It also gives me an opportunity to say something about the problems of creating an anthology of this sort. I’ll use Granta 113 as the example, but my comments apply equally to the earlier “Best of Young Novelists” (and similar collections under other mastheads).

How do you anthologise a novelist?

To give a fair picture of a writer’s ability in the form of a novel (which is a long and large piece of writing, with space for character development, extended description, and so much more), really, the only way is to publish a full novel (or perhaps a novella). Magazines just don’t have that space. I suppose they might try a serialisation, but Granta has, I think, only ever tried this on one occasion. (They serialised George Steiner’s The Portage to San Cristobal of A.H. in Numbers 2 & 3 in 1980.)

Instead magazines are more likely to publish extracts. But because extracts, naturally, are rarely self-contained, they tend to be jagged, obviously incomplete. It’s difficult to find a decent extract from a novel that fairly presents the author’s competence as a novelist.

For this reason, the usual practice is to publish short stories. Short stories are rounded, complete and show off a writer’s ability very nicely. The problem with them, though, is that they are not novels. If, like Granta in the “Best of …” series, the magazine promises novelists, then filling its pages with short stories is a bit of a cheat.

So why not call the anthology “The Best of Young Short Story Writers?” Apparently the general public don’t get nearly as enthusiastic over short stories as they do over novels. Short stories are like poems, they have a niche audience who love them, but in the wider world the reading public just won’t buy them like they’ll buy novels. At least, so I’m told.

So, in Granta 113 what we find are examples of writing by 22 novelists, 13 of whom are represented by short stories.

Beyond that, though, you’d expect the contributors all to have published at least one novel, wouldn’t you? I would. True, most of them have (and some have been very prolific), but there are three contributors who don’t seem actually to have completed and published one single novel yet. I’m still trying to work out how they qualify as “novelists”. I’d guess there was a slip in the meaning of the word between English and Spanish if I didn’t know Granta had performed the same sleight of hand with their earlier “Best of …” editions. (For example, Adam Mars-Jones appeared twice in Granta’s Best of British lists –- numbers 7 and 43 -– with a 10 year gap between, before managing to complete his first novel.)

To be fair, the editors are frank about this being a bit of a guess. They write:

In ten years’ time we will see if our choices were correct, how many of the writers in this collection will have lived up to their promise, how many of them will endure.

Looking on the bright side, though, it means the actual proven ability to write a novel is not a prerequisite for a young writer to be taken as a novelist. At least, not by that part of the literary establishment represented by the editors of literary magazines.

Maybe young writers might find that encouraging. (This somewhat older writer does! 🙂 )