The last, long weekend in April I spent quite a lot of my reading time in the company of Bear Grylls and his adventure novel Burning Angels. Oh dear.

Mrs SC and I took the late flight to Brussels on a Friday evening. We were going to have a little holiday and finally close the bank accounts we’d kept open to pay late received bills after our three years living in the city. (You can read more about our visit and see some photos here.) In the general rush to pack I forgot to take anything to read, but that’s okay – there’s a paperback shop at Landvetter airport and they usually have a fair selection of popular books in English.

At the bookshop I browsed the shelves looking for something that was lightweight – both to read and to carry. Bear Grylls’ book seemed to fit the bill. The man is a TV adventurer. I’ve caught glimpses of him from time to time, though I’ve never seen any of his programmes. Wikipedia tells me he’s written a number of factual accounts of his travels and books tied into his programmes, as well as some children’s books. All to the good. Burning Angels looks to be only his second adult novel, but still, his second. That means the first was good enough, and sold well enough, for the publishing company (Orion/Hachette) to want him to write another. A good recommendation to set alongside some enthusiastic quotes on the cover.

But Burning Angels was a real disappointment.

To be fair, not all of it was entirely the author’s fault. It turned out that Burning Angels is the sequel and continuation of the story in Grylls’ first thriller, Ghost Flight. Had I read the first book, perhaps I would have been more prepared for the second. (Perhaps I wouldn’t have picked up the second.) Certainly, I could have skipped over a great deal of the catch up exposition Grylls feels obliged to include to remind readers about the events of the first novel bearing on the current one.

Okay, I’m looking for something less than damning to say here. (In fact, had he been a better writer, he would have handled even that exposition better.)

The protagonist is called Will Jaeger, nicknamed Hunter. There are literally paragraphs spent explaining how he got his nickname, but at no point does the narrator or any character in the book comment that “Jaeger” means “Hunter” in German. This is even more bizarre given the apparent knowledge of (Nazi era) German language held by several of the characters.

Yes. Nazis. Seventy plus years on from the Second World War (English) thriller writers are still exploiting Nazi villains. To be sure, all the original Nazis are dead by now, but their children and their children’s children are still legitimate villains it seems. (Okay, Grylls does try to make the Nazi grandchild a bit sympathetic. He likes wild animals and is embarrassed and maybe a little ashamed of his father’s commitment to the cause.)

Quite apart from the exposition linking back to the first book, there’s an awful lot of info-dump. Characters use what I take to be appropriate acronyms, but then feel obliged to explain them, at length, to other characters who already know. Even Grylls is uncomfortable about this, though he can’t be bothered to rewrite and avoid the complication. At one point, after the deputy head of the CIA has explained to the US President the meaning of a certain acronym, the President replies “I know that.”

Given Grylls’ background in the British military’s SAS, and given the hard-boiled ambitions of the book, I’m prepared to accept the accuracy of the book’s descriptions of weaponry and other military equipment. However there are so many other facts the book gets wrong. Quite simple things even. At one point, for example, Adolf Hitler is described as having brown eyes. It really doesn’t take a great deal of effort to discover – if you don’t know already – that Hitler’s eyes were blue. Many people who met him or saw him speak describe his eyes as very distinctive. “Piercing blue eyes” is a common phrase.

One of the secondary characters in the book is Russian – Irina Narov. I’m not sure what “narov” is supposed to mean – it certainly doesn’t seem to be a Russian family name. According to Google Translate (so take with a pinch of salt) “naròw” in Polish seems to mean “bad habit”. It’s an element of a number of Polish family names, for example Narowski. But in Russian, not so much. Also, since the bearer is a woman, it ought to be written Narova. That pulled me up every time I saw it.

At one point Jaeger and Narov must sneak into the camp of ivory poachers. They wade through a muddy water hole, contaminated with animal faeces. To hide themselves they spread mud and shit over their hair and daub their faces with it. Quite a play is made of how disgusting this is. But a short chapter later, long before either of them have had a chance to wash, they are camping out overnight and cuddle together to keep warm. Having apparently forgotten about the stench of mud and faeces, Grylls has Jaeger approvingly sniff Narov’s “sweet womanly smell”.

There are a lot more clichés along these lines. Jaeger’s wife, for example has an “elfin face”, a “cloud of dark hair” and “green eyes”. Or maybe they are blue-green, Jaeger can’t quite decide.

Another thing that irritated me on and off throughout the book was the cavalier attitude Jaeger exhibited towards nature, when he wasn’t busy trying to protect it. Quite early in the book, even before I realised Jaeger was as keen to protect wildlife as he was to hunt Nazis, I was put out when he and his companions ditched their parachutes into the Caribbean Sea. I’m not sure what they could have done otherwise, but having recently seen film of naturalists and activists trying to cut whales free of ghost fishing nets, I found myself wondering how many fish and other sea creatures would be entangled and killed in the strings and canopy of Jaeger’s abandoned parachute.

It called into question for me all of Jaeger’s later professed concern for nature. As it turned out this was not the only time Jaeger and his companions threw their rubbish away. In fact they seem to leave a trail of detritus behind them across three continents and two oceans.

Did Grylls get anything right? Well, I did notice that he was following one rule. He often breaks his chapters in the middle of scenes rather than between scenes. It’s one technique to keep your reader hooked. And I stayed hooked, I did, all the way to the end, hoping against hope that the story would all come together.

I hoped in vain. After the final chase and fight, the novel petered out into two summary chapters (one of which was called Epilogue) which wound up some of the loose storylines. It was as though the author himself got fed up with his book and couldn’t be bothered to resolve the story properly.

I left my copy of Burning Angels in a book box I found a few doors down the street from the place we were staying in Brussels. At least I know now I don’t need to read any more fiction by Bear Grylls. 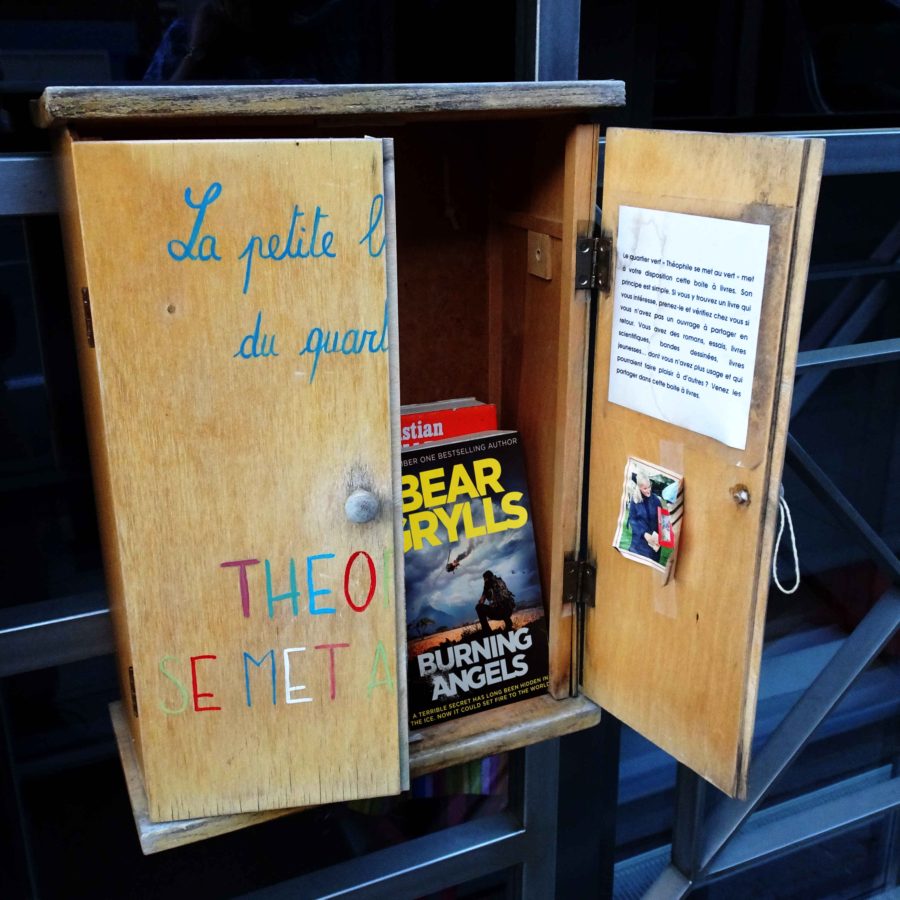 I wrote this book review for the #Blogg52 challenge.

As of 30th Sept 2018 an extract from this review now appears on Good Reads here.

6 thoughts on “Burning Angels by Bear Grylls – a review”