The Paddan boats are a popular tourist attraction in Gothenburg. Sometimes it’s fun to play at being a tourist in your home town. 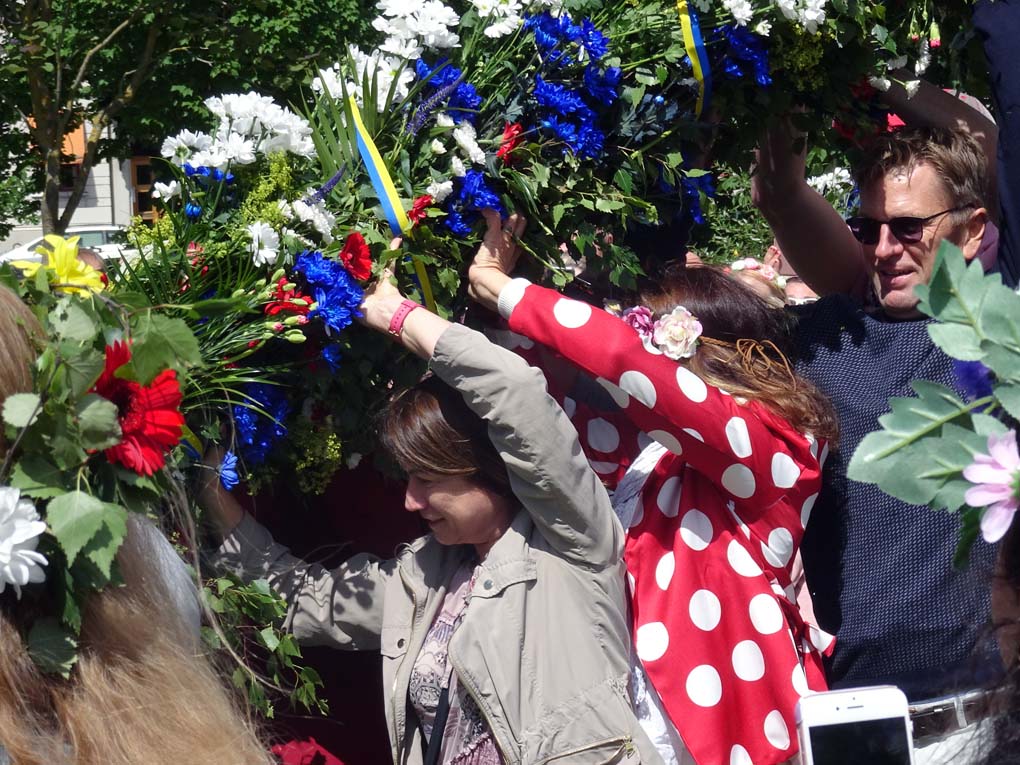 A Paddan trip on Gothenburg’s waterways

The last weekend in June Mrs SC and I hosted an American friend visiting the Swedish West Coast for the first time. After celebrating Midsummer in Trädgårdsföreningen park (during which Sharon helped decorate and raise the Midsummer Maypole), we cast about for something else to do. The weather continuing glorious, we decided a trip around the canals in a Paddan boat would be a good idea. 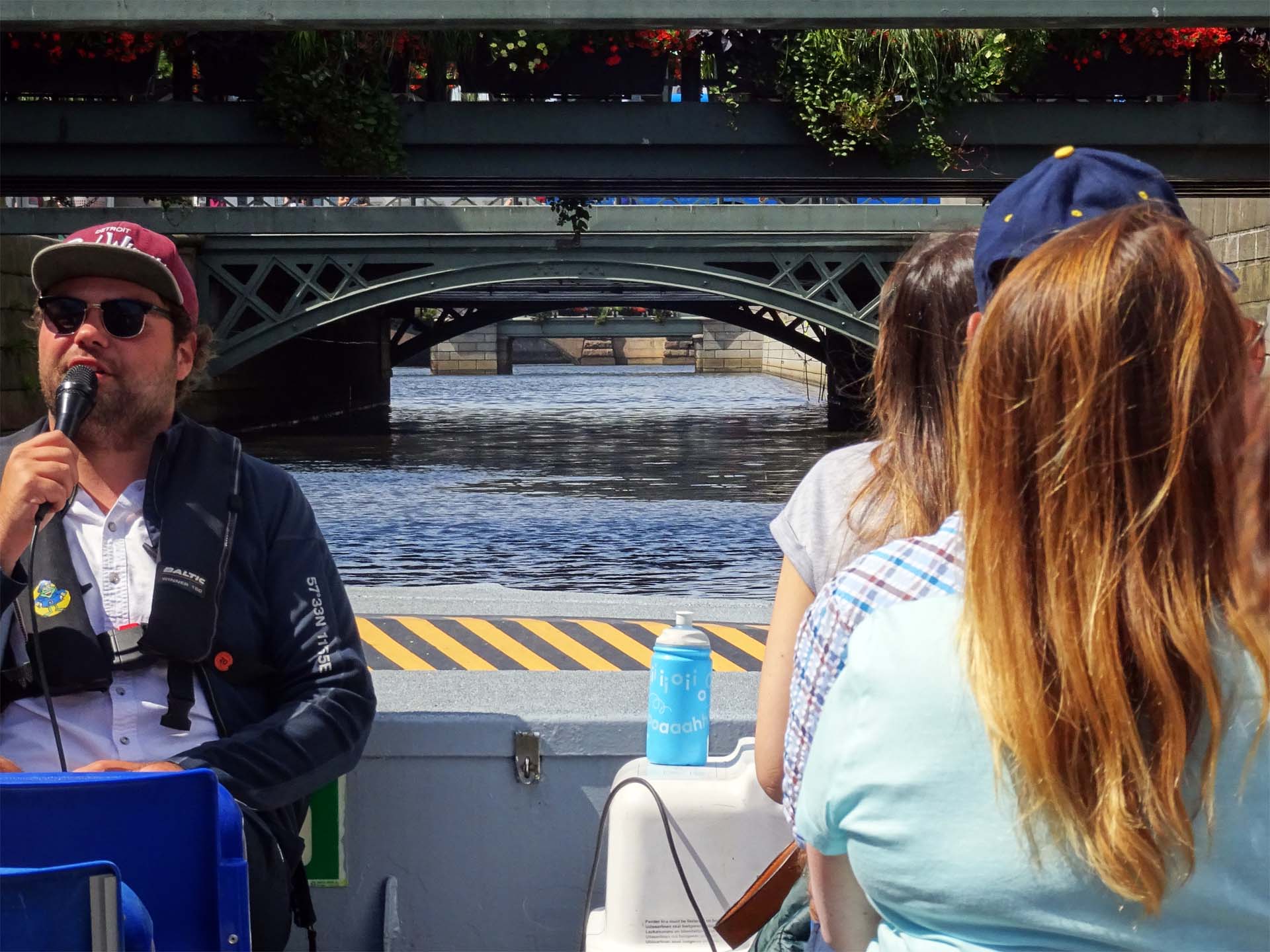 Wide, motorised barges fitted with seats, the Paddan boats are a popular tourist attraction in Gothenburg. Successful as a business too since they are now being imitated by another tour company. But the Paddan boats are the original and best. The boats are driven from the back by the captain and guided from the front by a cheerful tour guide whose information is often more or less correct. Allowing, that is, for the abbreviations necessary for passing it on in at least two languages. Also for the local jokes and obligatory punning. (The cliché Gothenburger is always making puns. The guides are probably required to play up to this.) 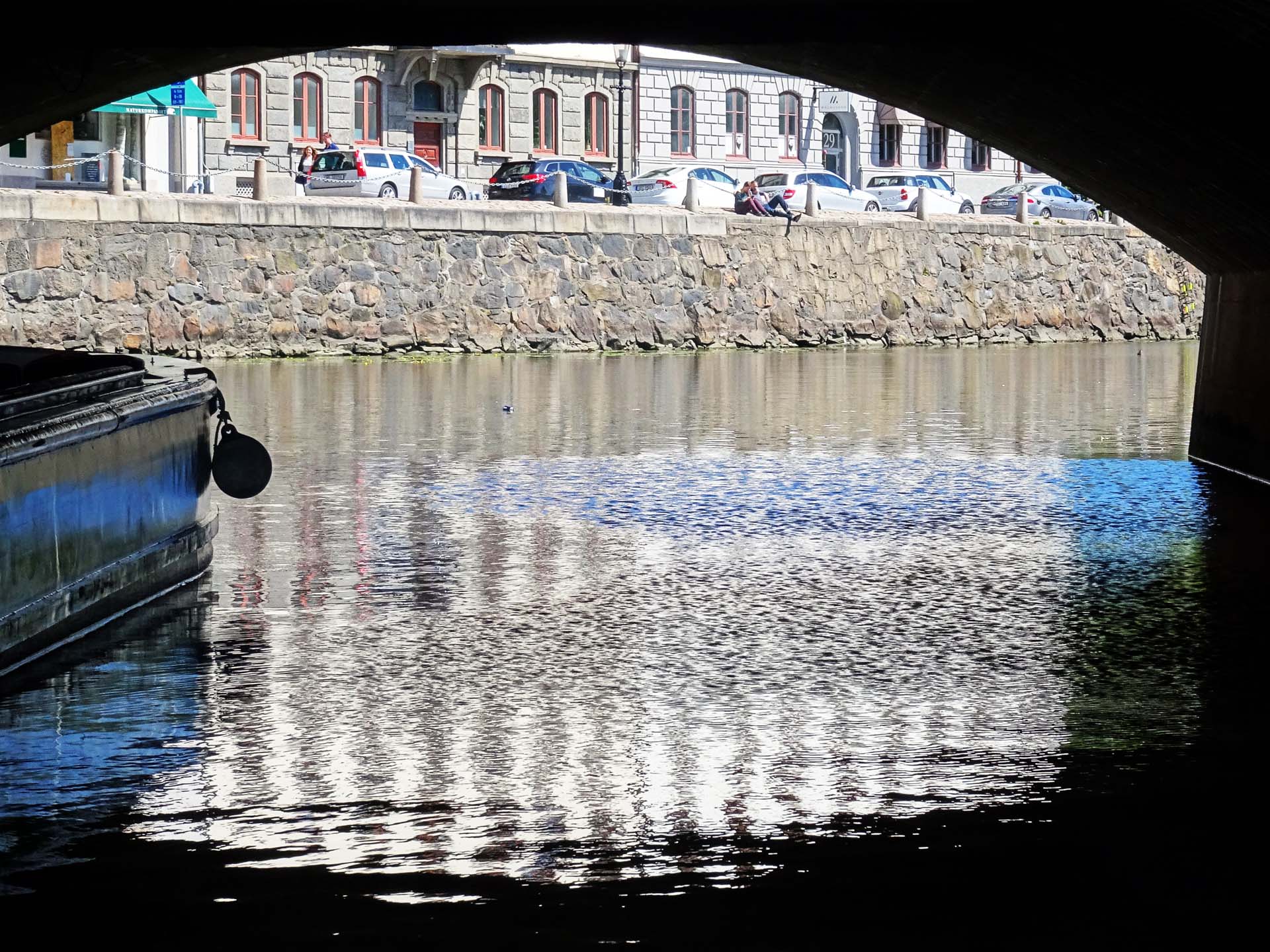 The original city was built as a defended port by Dutch engineers in the early 1600s. The engineers supposedly used the same plan as for Batavia, the Dutch colonial capital of Indonesia (now Jakarta). This heritage left Gothenburg with canals and a wide moat linked to the navigable Göta älv – the Göta River. Nowadays all this water is an important feature of the inner city and much used not just by the Paddan boats.

Because the canals cut through the city centre, and because so much traffic nowadays is wheel-based, Gothenburg is also a city of bridges. In the photo below (taken from the top floor of the Clarion Post Hotel) you can see the Stora Hamnkanal, the Great Harbour Canal, that runs through the city centre. At the top of the picture you can see a little of the water of the Göta älv. 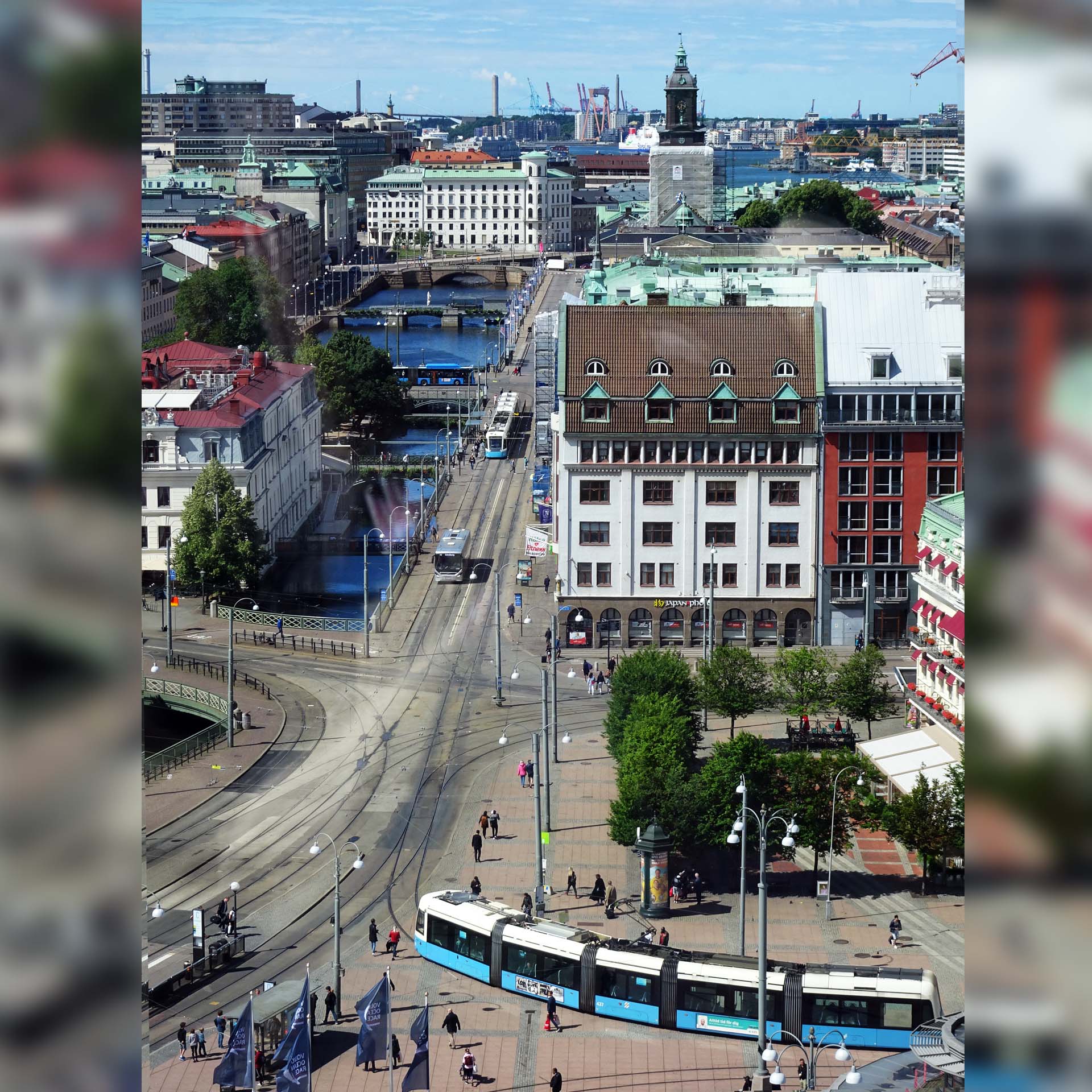 The Paddan boats pass under the bridges, some of which are quite low (especially at high water). The two lowest have nicknames: the Hairdresser and the Cheese Slicer which may have been given them by Paddan guides. The latter has recently been raised so it’s not so much of a threat to the heads of boaters passing under it. It’s also been decorated with a giant model of a cheese slicer. 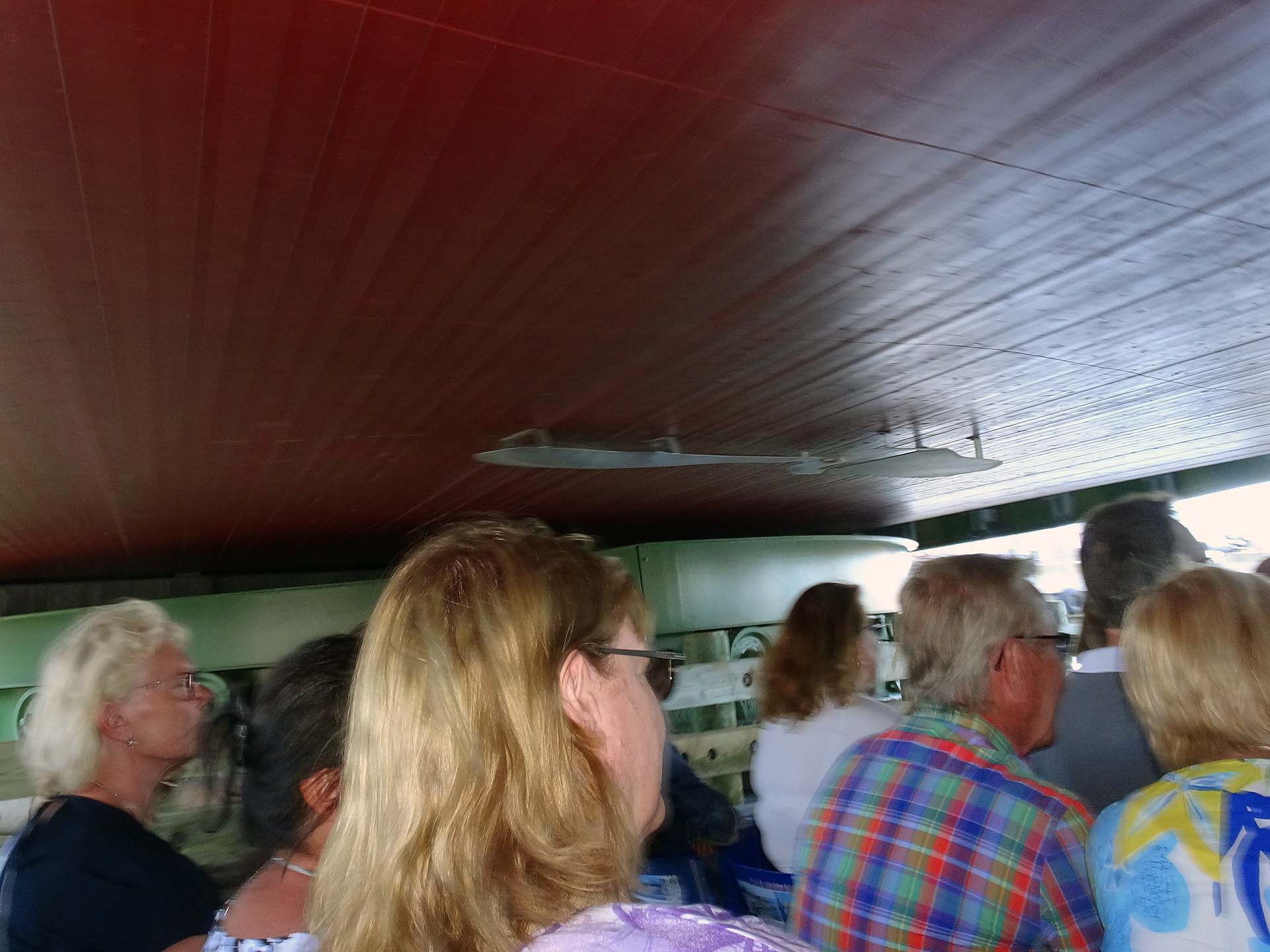 Boats pass under the Cheese Slicer to exit the city canal system into the river. The usual tour then circles around before returning to the moat under the Hairdresser. (Still too low for any witty sculptural add-on.) That was the route we took with Sharon the last weekend in May. But, because we’d enjoyed the regular tour so much, the following weekend we took the extended tour.

This time the Paddan travels on up the river. It passes the Barque Viking and the Lipstick, the iconic three masted sailing ship and the red and white office block, under the 80-year-old Göta Älv Bridge and on passed the engineering works that are constructing the bridge’s replacement.

Then on up the river passed Drömmarnas kaj, the Quay of Dreams (where old sailors and weekend hobbyists work on their wrecks and dream of the voyages they will make one happy day) and on up the Göta älv tributary Säveån, Säve stream.

Säveån is connected via a canal system to the city canals, but that is too complicated to negotiate on this 2 hour trip. Instead the Paddan pushes on up the stream through a district of Gothenburg that used to be highly industrialised. Nowadays it’s an area that’s very mixed, with bridges and office blocks but also old boating clubs and areas of dereliction.

Along the sides of Säveån there are willows and bushes, but also (below) invasive species like these poisonous giant hogweed (Heracleum mantegazzianum).

At last Paddan finds a place in the stream wide enough to turn. And now it makes its way back to the main river. This time passing along the north bank we get to see a bit of Gothenburg’s one surviving ship yard, Gotenius Varv. 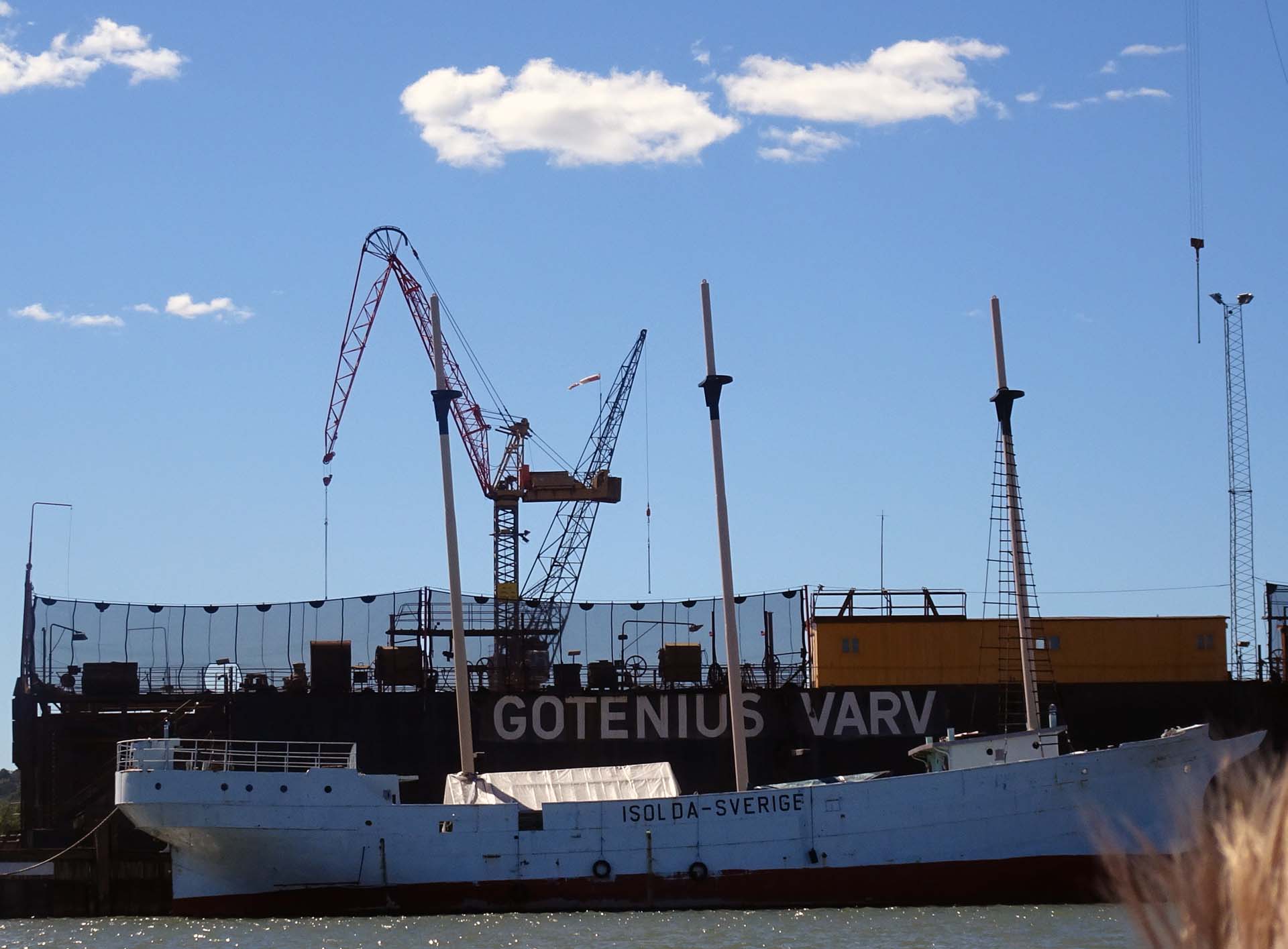 A bit further on as we pass the area that used to house Götaverket, another ship yard now deceased, we see these graffiti sculptures. The guide tells us they’ve recently appeared. Who is the artist and how did they get these figures into place? No one knows, says the guide.

Then it’s under the Hairdresser and back into the moat for final leg of the tour.